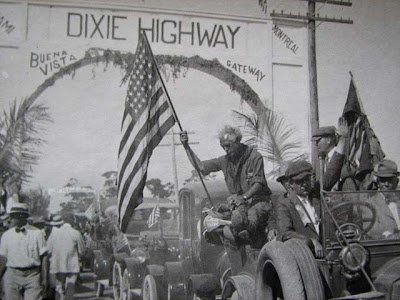 Today will be a catching-up day of postscripts to earlier posts. The picture above was sent to me by Northport, Michigan, friend Steve Gilbreath (also known as the Fearless Leader of our early winter Ulysses study group). The man raising the flag in the picture is Big Steve’s grandfather, William Sydnor Gilbreath, “a pioneer,” Steve writes to me, “for ‘good roads’ and the first manager of AAA Michigan in 1916.” Steve says it’s been a mild winter so far in northern Michigan (it was not mild earlier on, while we were still there, Steve!), but he wonders if being the grandson of W.S. Gilbreath might get him a condo in the new SunWest development. He also sent this link to a fascinating history of Florida Roads, and I’m beginning to wonder now if the “couch road,” as David and I call it, was ever part of the original Dixie Highway or was simply given the name later, as a tribute, when the designation disappeared from public use.

(Although Florida highways history is the main subject of the link Steve sent, other early roads appear in the story, among them the east-west Lincoln Highway, which later became Route 30, a two-lane highway I had to cross as a first- and second-grader to get to school and later used as my back roads route home to visit my mother, before it was widened and lined with housing developments and shopping centers filling in old prairie farmland, heavy traffic and new traffic lights forcing me over to I-94.)

Another reader, the writer of Throwaway Blog, commenting on the stretch of Dixie Highway in Michigan (the designated road began at Sault Ste. Marie), sent this link to a list of Michigan roads of the 1920s and 1930s. (The following two pictures, dmarks, are for you in return.) 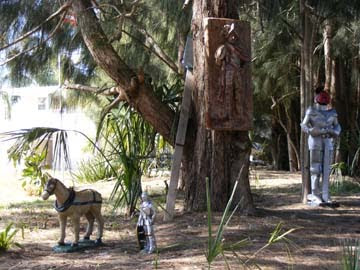 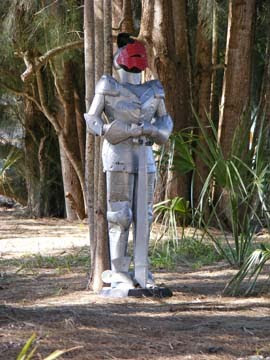 I wondered why Blue Star Highway and Red Arrow Highway, favorites of mine in southwest Michigan, were not on the list. Blue Star was designated after World War II, but Red Arrow's history is more complicated, its designation changing over time. (You can tell I haven't sorted it out yet.)

And, back once again to Florida and development along the Nature Coast, I received e-mail from a new reader, somewhere in our winter neighborhood here, who sent me a link to a group opposing the SunWest development.

What I’m reading: Two hundred pages into Ronan Bennett’s The Catastrophist, the story shifted briefly from the Congo to the United Kingdom as the narrator recounted the story of his parents and his own early years. Ever the bookseller, I could not help being caught up in this passage:


I wandered down Chancery Lane and up the length of Fleet Street to Ludgate, and near St. Paul’s I found a dusty old bookshop where, out of idle curiosity, I picked up a nineteenth-century French novel. It had been a very long time since I had read fiction. I stood on the creaking bare boards of the floor and glanced over the first couple of pages with only passing interest, thinking at the end of each paragraph to put down the book and go on to explore the history shelves. Instead I kept reading. It seemed to me that I knew the people in the story, knew them firsthand. The more I read the more I recognized their voices, the way they walked, the houses in which they lived. I knew their banality, their pretensions, their selfishness. It was almost as if the story had been set in the world of my childhood. Why had I not read this before? Why had no one told me?


In my dreams last night something strange had happened to the ceiling lights in my bookstore. The way to switch them off and on was with simple strings hanging down, like the strings one used to see hanging down from bare bulbs in basements (including the basement of Mrs. Arnold’s old bookstore in Traverse City), and one of the strings had been so inconveniently long that I’d cut it shorter. To my surprise, this act on my part somehow shortened all the other strings, which now hung out of my reach, and I had to go about the bookstore with a chair, clambering up to each light individually to switch it on. A bookseller’s dream, hardly noteworthy--except to me, to think that I would dream of my Michigan bookstore during our Florida winter. I am like the Mole, unable to give up his new, adventurous life with the Rat but still feeling the pull of his modest little home.

So I was sad to hear of closing of a long-established bookstore in Gainesville. Florida. July 2010 will mark the 17th anniversary of Dog Ears Books, but there is no assured future in this business or any other human endeavor. It is what it is until it is no more. I’ve worked hard and have been fortunate so far with good landlords and enough of a loyal clientele to keep going. 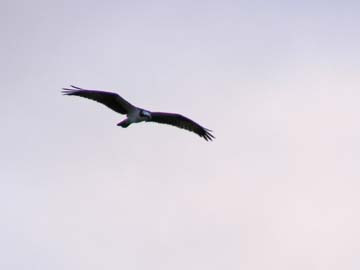 Thanks for the mention of WSG. He was by all accounts a true adventurer, although I doubt that he ever ventured into Ulysses. He left that to his son John, the literary adventurer of my family.

Hi, Big Steve! Thank YOU for sending me that great photograph to post!

Have you gotten a spring ULYSSES group together yet?