I Go to Paris, France, and Meet a Famous Actor 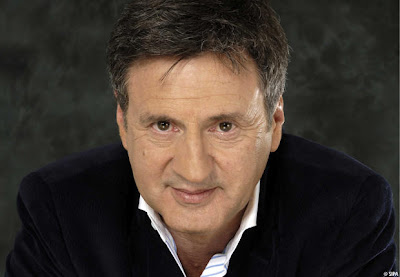 David is always meeting famous people in his dreams. They have drinks together, go to dinner, have great conversations. Not me. My typical dream is vin très ordinaire, a very unremarkable house wine coming to the table in a plain, unmarked carafe, events and cast of characters alike. My best dreams are visits with deceased friends (“She looked great!” I’ll David happily), the most tedious peopled with boring strangers. But now I’ve had a break-through: I have met a famous person in a dream, and it was a very satisfying experience! Not that there was romance. (There was no romance.) We didn’t even get along very well, under the circumstances. Truthfully? He was trying his best to extract himself from the situation. But there we were, face to face, and I was speaking French with him, so even now, too close in time to the event (the dream event), I can’t use the word “Actually” there in place of “Truthfully” because the French actuellement means :at this very moment,” and at this very moment I am tapping out a report of my dream, not actually dreaming, and I can say without hesitation that staring at words on the screen of my laptop are nothing at all like looking into the dark eyes of film star Daniel Auteuil. For yes, it was he, and we met in Paris. I am so pleased!

David and I were staying in a hotel. I was going up to our room, and David was going out, and he handed me my camera as he left. Stopping at the desk, I put down purse and camera, forgetting them as I walked to the elevator. Later, when I missed them and remembered where they were, it hardly seemed an emergency. After all, they were at the desk and would be there whenever I went to retrieve them. --But they were not! One of the “girls” had taken them home! I berated the man and woman now behind the desk, asking how they could have done such a thing and demanding a home telephone number for the “girl.” I was very upset and had raised my voice, to put it mildly. Just then a man beside me predicted that I was going to start crying. I pulled myself together and, turning to him, said with great dignity, in French, “J’ai décidé ne pas pleurer (I have decided not to cry).” At that, his expression changed to admiration--this was not yet Daniel Auteuil but a very nice, helpful Frenchman—and he complimented me on my dignity. I told him that I had found it in French films (???), and he was so impressed that he began to scrawl a letter on hotel stationery that I was to take to the nearest PTT office lost-and-found. (I can’t remember if the PTT usually has a lost-and-found counter and don’t know why the hotel would not have taken care of this simple matter themselves, but we are dealing with dream logic here, don’t forget.) There were two other sheets of paper with the letter he gave me, and on one of those that I saw a photograph of Daniel Auteuil, and the sun broke through the clouds. “He’s going to help me?” I rushed out and ran down the sidewalk to the government building indicated.

This is the moment even dream logic cannot explain, and even as I was dreaming I realized—as the dreamer though not as myself in the dream—that this could only be an amazing coincidence, that it could not be Daniel Auteuil’s job to arrange for the return of my belongings, but there he was! I was thrilled, almost but not quite, beyond words. I showed him the letter and accompanying papers. He took a step backward, his dark eyes opening wide. He shook his head and waved his hands to indicate there was a mistake. Who was that man with him? His agent? I went on the attack, accusing both of them of not wanting a famous star like Daniel Auteuil to have anything to do with a woman his own age! I told Daniel Auteuil that I was very disappointed (très deçue) to find that he was not at all special but a very ordinary person, “comme tous les autres.”

“And did he help you?” David interrupted as I was recounting this dream to him. I had wakened him from a sound sleep to share my experience before it evaporated completely.

“What was he wearing?”

Why would Daniel Auteuil make an appearance in my dream? Star in my dream, as it were? Probably because only 24 hours before, I had been reading a Maigret mystery in which the murder victim’s body was discovered in her family house in the Paris suburb of Auteuil, but all I can say about that is that if I’d been asked who I wanted to meet—Georges Simenon, Inspector Maigret or Daniel Auteuil—there would have been no contest. C’était comme il faut, exactement.
Posted by P. J. Grath at 10:48 AM

And David wasn't even jealous!

Very cool. I have long intense dreams in color like this too quite often. The most extreme of them I can remember most of for a long time. I kind of enjoy them as long as no one dies!

So here's an example: This morning when we wake up David tells me he dreamed of having a conversation with Fran Liebowitz, in which he gave her advice on shoes. This happens to him all the time.