Development Along the Nature Coast 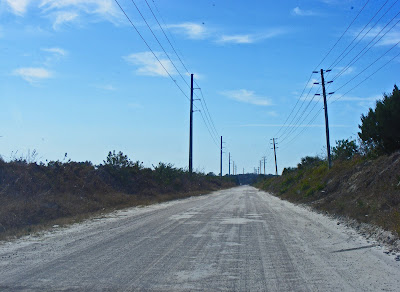 This is a view south on the Old Dixie Highway, the road that preceded Hwy. 19, the main artery south before I-75 and the new Suncoast Parkway. It’s definitely a piece of old Florida. Since we first drove this stretch of the Old Dixie Highway back in about 2003, David and I have called it, between ourselves, the “couch road.” Between Aripeka and Hudson, this back road full of dust and potholes, not heavily traveled, was not exactly lined with old discarded furniture, but on any given day we could count on seeing at least one old sofa and usually a couple of overstuffed chairs, shoved off the back of pickup trucks and abandoned on the wayside. The land on both sides of the road, Gulfside and inland, was the property of Sun West Mines. In either direction for long stretches of the road, the view was (and still is) cut off by high earth berms. One time, curious, I scrambled to the top of one to see what lay beyond, out to the west. Incredible! An immense lagoon met my eye, the water turquoise in color, like water I would expect around tropical islands, while beyond that lay a spit of land with palm trees. Beyond that I could only imagine. What I could see looked like a fantasy world.

Okay, back to reality. As noted in previous posts, we are not wintering on the balmy beaches of South Florida but near the southern end of what promoters and boosters are teaching people to call, in the interests of attracting tourist and snowbird dollars, the “Nature Coast.” The Nature Coast starts on the northern stretch of Florida’s Gulf of Mexico shoreline, around and down the curved corner from the Panhandle, and my own southern dividing line (there’s probably a semi-official one, but I don’t know where it is) would be Tarpon Springs. The Nature Coast has not escaped “development,” but only in recent years has it been targeted for condominium development. After all, you need to wear a coat here sometimes in the winter. (Everyone in Florida needed coats this winter, but that’s uncommon for south Florida, common in north and central parts of the state.) New luxury condos at Suwannee, for example, where friends of ours have a little house, still seem terribly out of place, as do the few people who have bought into the development.

(“Where’s the town?” one new owner, who had bought his unit sight-unseen, asked our resident friend. “This is it,” Gene said with a shrug. “Well, what’s there to do around here?” the new guy asked. “Fish,” Gene told him. In a word, that’s what people go to Suwannee for. The new owner’s dismay was obvious. “I don’t fish!” he objected.)

Suwannee is in Dixie County. Pasco County, while still central, is considerably south of Suwannee, and the planned Sun West development just south of Aripeka will have plenty of shopping and golfing and several libraries within reach, but the question asked by locals is, of course, the same one folks asked in Suwannee: What affect will this enormous new development have on our lives and property? Good, bad or negligible? Will there, for instance, be heavier traffic on Aripeka Road, even though main access to Sun West will be from Hwy. 19? Will there be more business for Norfleet’s store, or will new businesses drain the life from little Aripeka? Will property values go up? What about taxes? As usual with question of this kind, opinions vary.

One morning on our way to Paws, a thrift shop that supports and finds new families for homeless cats, we decided to take the couch road to Hudson, and we found something new not far from the intersection with Aripeka road. An area of trees and brush had been cleared to open up the view. 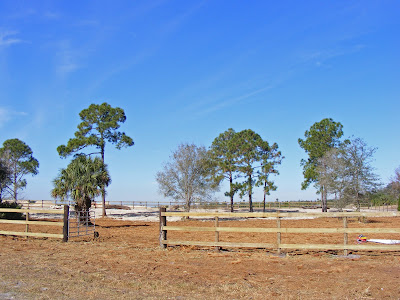 There was a new split-rail fence, its gate propped open invitingly, and just beyond a second fence set back from the first was a sign, obviously put there to inform a curious public. We were curious and got out to investigate. Here’s the sign we saw: 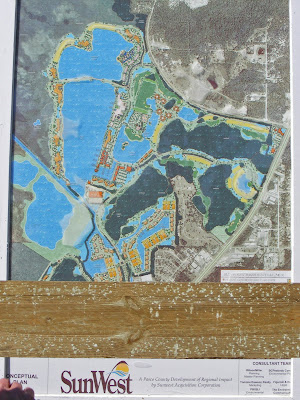 This development is so huge in scope (over 1200 acres, including wetlands) that it makes anything we’ve seen in northern Michigan look modest. Single-family homes, multiple-unit dwellings and boat docks are all part of the vision, but it doesn’t look like a relentless crowding together of canals and houses cheek by jowl. Large wetland areas will remain (along with, of course, the lagoons themselves), and while boardwalks will give residents limited access to natural areas, wildlife will have a lot of space left. It could be beautiful, depending on the architecture. The units won’t be anything we could ever afford to buy, but it might be lovely. It could, on the other hand, be ostentatious and godawful. Time will tell on that score—and opinions will differ on that, too. 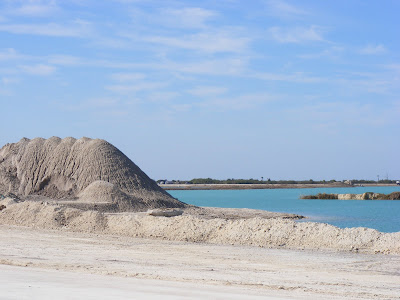 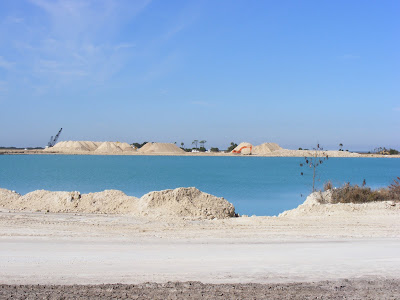 Is this development plan good or bad? If the area had been occupied by modest trailer parks, and long-time residents were being booted out by the developers—or if we were talking about a natural wilderness area formerly accessible for recreation and sports, now to be off-limits to all but the wealthy—or if the planned development looked like an environmentally insensitive, get-rich-quick real estate scam—in any of those cases, I’d think it was a damned shame. But no one will be displaced by the new homes, no wilderness will be destroyed, and the area has been closed to the public for decades. It would have been great to see a county, state or national park go in on the site, but these are belt-tightening times for government at all levels. Real estate development is moving slowly and cautiously, too, and the new Sunwest group is clearly taking its time, not trying to do everything at once. Maybe the whole plan will be completed one day, and maybe it won’t. 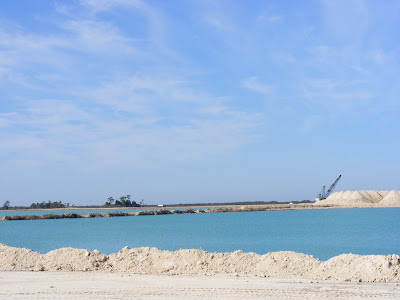 We are not Florida residents. We’re only here for three months, and we haven’t “been coming here” for all that long. We’re not operating businesses here, seasonal or otherwise. So we listen to whatever the locals have to say and take no positions of our own, pro or con. My sympathies are always with small towns, modest businesses, gradual evolving rather than blanket development, and I hate to see “empty space” all filled in. And yet? I’m not sure what will be lost with the Sun West development. If taxes were to rise too fast and get too high in Aripeka, that would be a bad thing: overnight “gentrification” is cruel to those who are pushed out. Would increased job opportunities for locals balance out higher living expenses, making it a trade-off? Will Aripeka be able to reap benefits and maintain its own quirky, back-road, time-forgotten charm?

Look to others for answers. On this matter, I have only questions and good wishes. 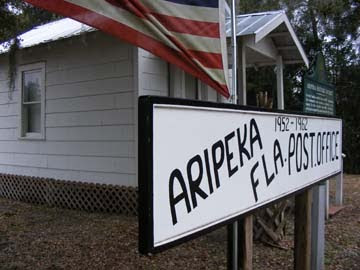 My Grandfather William Sydnor Gilbreath was instrumental in laying out the Dixie Highway as part of a "good roads" effort. He ended up as the first manager of AAA Michigan in 1916. Would this qualify me for a new condo? If so, I'll let you and David stay there.

A scrap of Old Dixie Highway remains in northern Michigan, just north of Eastport. Until I did a story on the "good roads" effort I never knew why it was called that. The "Flat Road" was there a long time before the promoters' dreams, but I have to admit that the promotion worked. The road from Up North to Sunny Florida is paved with wistful hopes.

It looks like a sort of ocean side strip mine.

According to this, Dixie Highway is in Traverse City, MI too.

Well, what surprises are next in store for me? The Dixie Highway in Michigan! And my friend Steve's grandfather one of its creators! Mr. G, may I post that picture you e-mailed me in a follow-up to this? So many thoughts are bubbling up, not all of them closely related to the road. E.g., the famous Union Terminal in Cincinnati (world's largest half-dome construction when built--dmarks probably has a postcard) overshadows in reputation the lesser-known Dixie Terminal building closer to the Ohio River. Paved with dreams, indeed, Gerry. And dmarks, the area looks like a mine because that's what it's been up to now.

Hey, dmarks, re your link--no Red Arrow or Blue Star?

Also here is an interesting PDF file about roads in Florida and the history of the Dixie Highway:

Just copy and paste it into your browser on the internet highway system.

Thanks for more information, Steve, and permission to include the picture you sent on the followup post I have yet to write. Someone involved in keeping the coast undeveloped sent me a link, too, that I need to check out.