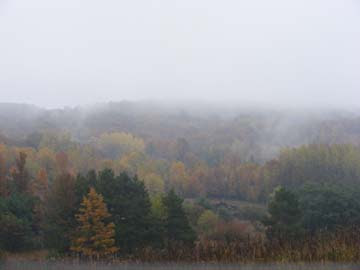 More grey skies and rain, but there’s still plenty of time for more warm autumn days, and I’m counting on them. Anyway, “soft” days like yesterday (today was much colder) have a quiet, still beauty of their own. 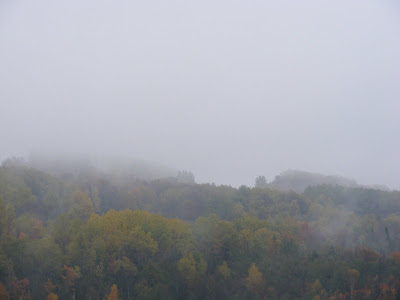 I was late getting started this morning, after being up until all hours, and I’m blaming my late night on Mardi Link. It was her new book, Isadore’s Secret: Sin, Murder, and Confession in a Northern Michigan Town (University of Michigan Press, $22.95 paper) that kept me reading aloud to David long after we should have been sound asleep. The story of the teaching nun who disappeared from Holy Rosary in Isadore a hundred and two years ago first caught David’s attention when he talked to a woman who had been a schoolgirl there at the time Sister Janina vanished; interest piqued, he spent hours at the courthouse, reading through official court transcripts, captivated by the story. So all these years David has had a version of the missing nun mystery in his head, a version that includes memories of an eight-year-old girl. (How accurate were her memories?) Then we saw Milan Stitt’s play, The Runner Stumbles, which took literary license with the story for dramatic effect rather than sticking to the bare facts, and, all told, my picture of what happened became a messy jumble of fact, fiction, other people’s memories, and my own hazy recall of who had told me what.

Enter Mardi Link, true crime/cold case researcher. Finally, I thought, I can get the story straight! But Link’s book does much more than that. “It isn’t a novel, is it?” someone asked me today at Dog Ears Books. (Or did she ask, “It’s a novel, isn’t it?” This was after I had just sold my last copy and had to say that I was re-ordering.) No, it isn’t a novel, but it reads like one. Link says she hasn’t made anything up, that sentences put in quotation marks and attributed as speech by one person or another are only there if she found them in a documented source. All I can say is that the story flows along, pulling us with it, and we (David and I) are picturing each scene fully as we read.

By late August, the aligned stalks were thickly tasseled, grew chest high to a man, all but dwarfed the women, and the group [of searchers] walked down each row, swinging their lanterns to cut through the darkness. They looked in the vegetable garden and around the corner shadows at the edge of each of the buildings. They searched the horse shed and the chicken coop. No one found any sign of Sister Janina. Not a footprint, not a depression in the earth where she rested, not a stray fiber of her wool habit, nothing. It was as if God Himself had reached down and plucked her from them.

To read this book is not only to follow the unraveling of a mystery but also to live in a bygone world and a very foreign one, as well, a tiny pocket of Polish-speaking, Catholic immigrant farmers who kept to themselves and maintained as far as possible their Old Country customs. The cultural details help bring the story to life. We see, for example, what will be missed by a young, unmarried, pregnant girl sent downstate to have her baby:

...She would miss the Christmas Eve celebration, as well as the turon, or caroling, in observance of the Feast of the Three Kings.

She would miss the fortune-telling of New Year’s Eve, when all her unmarried girlfriends would knock on the doors of neighboring chicken coops, hoping to hear the crowing of a rooster in response. If they did, it meant they’d be married within the year. She would miss the simple act of wishing her neighbors “Bog cie stykej,” or “God’s good graces touch you.”

We learn that even married women’s pregnancies were not discussed, as talking about a baby not yet born was thought to tempt the Evil Eye and endanger the child’s life.

Isadore today is an almost deserted intersection. The brick church (not the old frame building that stood there in Sister Janina’s day) and the cemetery are still used, but the school and store and post office are no more, and many of the old houses and barns are gone, too. Picturing the little settlement with a school of over 100 students, many of them winter boarders, three to five teaching nuns, a priest, a housekeeper and a sexton in residence makes my head spin.

Isadore’s Secret is a tale of true crime and mystery. It is also historical drama and regional history. David and I left off last night on page 114, and I think I deserve some kind of medal for not going further by myself today but waiting—very impatiently!--for tonight when we will pick up the story again.

My last picture of the day shows a trio of very serious and purposeful wild turkeys making their way cross-country on Wednesday morning. Sarah couldn’t take her eyes off them. They have nothing to do with books, but I found them pretty fascinating, too. They don't look wild to me--rather, like country gentlemen taking a civilized stroll. 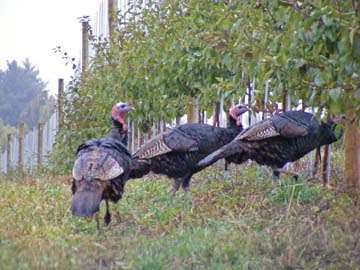 I love those 'soft' autumn days, the grey atmosphere seems to make the colours luminous in a subdued way, if that makes sense! And the scents of damp earth, foliage and moss are so glorious. The most mundane every-day routes turn into secret pathways through the mist!

That's the town I love every time we drive through, isn't it? The one I'd like to see come alive again!

Raph, it does make sense to me. I was searching for words to describe the effect, and it is subtly, quietly luminous.

Ian, it's hard to imagine Isadore as a town of the 21t century. The train from Traverse City, the orphans shipped up from downstate, the farm kids arriving for the school week with their bags of potatoes--like Fayette in the U.P., it was a place of a certain, brief time.

It is so interesting to read your book reviews and ponder adding them to my reading list. Those "soft" autumn days are delightful...such a good way of viewing them. Rather than gray and rainy and depressing. Love your wild turkey shot. Isn't it hard to get up close to them?

Turkey shot owes much to the magic of optical zoom, Kathy. I was in the driver's seat of my van, shooting through the half-open passenger window, right past my dog's head. If I'd gotten out of the car, I'm sure the turkeys would have scattered too quickly for me to get the picture.

It's a cold, dreary day today, with lots of cold rain instead of soft mist, but in my imagination I am in the old Leland courtroom, following a 1919 murder trial!