Another One For the Gypsy Dream Life Shelf 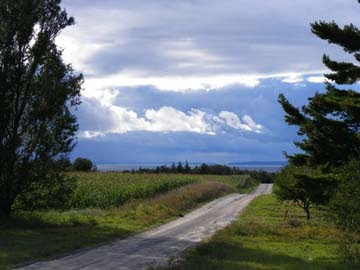 “Something there is that does not love a wall." What about a house? Isn't there something in us (many of us, anyway) that rebels from time to time at the ordinary walls that enclose our home lives? One of my best friends in first and second grades (there were four of us in a tight little girl group) was the daughter of a veterinarian, her family lived in an apartment above the animal hospital, and when the family moved a few years later to an ordinary house I found the change a sad one. Everyone lives in houses! To live in an apartment, upstairs from an animal hospital—now that, I thought, was romantic!

As I’ve written before, one different way of living that ignites dreams around our house (yes, it’s a house, but it’s an old farmhouse, and I don't mean ranch) is houseboat life. What other kind of dream life is equal in charm to a houseboat existence? David and I always answer that question by voting for a cozy, nomadic conveyance, whether moveable or immobilized, and our personal family fantasies can be found in a number of books, mostly (at least ostensibly) for children. Wind in the Willows gives a picture of three friends setting off in a gypsy wagon (though it’s a short-lived experiment), and in The Boxcar Children orphans set up house independently of adults and do a nice job of it for practically the whole of the story. When we two are concocting a new fantasy along “gypsy” lines, David begins with an on-the-road vehicle, while in my continuation of the story our imaginary wagon roll eventually into some idyllic natural setting, with room for gardens and livestock. Harlan and Anna Hubbard of Shantyboat fame combined both versions, living for years on a houseboat but stopping along the riverbank long enough to plant gardens and harvest crops, carrying their chickens and fishing lines downriver with them, and eventually returning to the Ohio after their long, leisurely Mississippi voyage to set up a self-sufficient, electricity-free household onshore at Payne Hollow, continuing their shantyboat lifestyle on land, as Harlan observed in his later books.

October’s first Sunday brought cold, spitting rain, not weather to tempt one outdoors, and I spent most of the day on housework, both the kind that needs to be done regularly but had been neglected because of our recent travels and the kind that is all too easily (especially by me) neglected for weeks or months. There was enough of a break in the rain by late afternoon so that Sarah and I 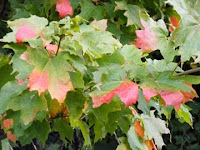 could get out for a long exploration of woods and fields. (Fall color has barely begun. The woods are green. It’s all still to come!) On top of the housework, the outdoor ramble was exhilarating but tiring, so by the time we finished dinner later in the evening (ratatouille made lively with dried morels) and dishes were done, I announced that I was not going to do any more work but just curl up with a book, and you guessed it—or, at least, you’ve probably guessed the general direction of my choice. The Trolley Car Family, by Eleanor Clymer, with illustrations by Ursula Koering, was just what the doctor ordered.

David is sometimes amused when I read children’s books, but when he asked me about this one and I described the setup of the story for him, his face and voice quickly responded, “Oh, boy!” Just his kind of story! Here it is: The father of a family of four is a trolley car driver who loses his job when buses come in. Mr. Parker doesn’t want to drive a bus but asks the company if they will give him one of the old trolley cars and rent him some of their land in the country so the family can live in it—at least until he finds another job and can afford to rent a house again. He drives the trolley car (loaded with family, furniture, clothes and provisions) to the end of the line. How it is engineered from there the last few miles into the countryside is a delicious part of the story, involving a subplot with bachelor neighbor Mr. Jefferson, a crotchety milk wagon driver, and I wouldn’t give it away for the world. All David had to hear was that the family was going to live in the trolley car. “And they build a porch on it, and there’s a barn and a spring nearby,” I added quickly while I had his attention. 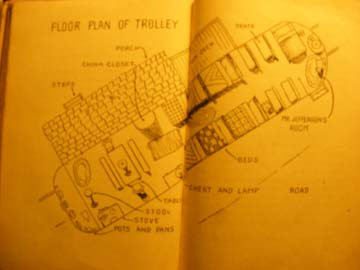 The barn and the spring are key to the success of the family’s life in the substitute gypsy wagon. Soon they have planted a garden and acquired livestock, and the oldest boy is happily planning to live there forever. No longer dreaming of becoming a baseball player, now he’s aiming to be a “dairy man.” 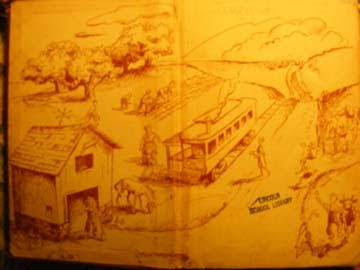 The oldest of the four children is the only girl in the family, and at times I found it annoying that she was saddled with endless housework while her brothers went to milk cows and gather eggs, and even the garden work was all done by the men and boys, because, injustice aside, everyone knows that tending chickens and gardens and even cows--when there are only one or two cows—usually falls to women in a homesteading situation. It is the joy of raising food, rather than being confined solely to repetitive chores that lead nowhere, that brings contentment to the countrywoman, in my opinion. But a reader can’t take excessive umbrage with the distribution of labor in a family as happy as the Parkers, and who could resist Mrs. Parker’s kitchen in the trolley car, a compact space in which everything was reachable to her from the swiveling driver’s stool? And of course there are windows all around!

There is a crisis when Mr. Jefferson, the family’s new friend, comes to the end of his vacation and has to return to his job in town, leaving the trolley car family. The family has anotber crisis when funds begin to run low and they must generate serious income. Will they have to leave behind their trolley car existence and their new country friends? Luckily, this is a children’s book from another era, 1947, and everything works out in the end just as a reader of any age would hope that it would.

WITW is a favorite in our house.

Most terrifying illustration in a children's book: For me, when I was little, it was a picture of an attic, with a stuffed owl, and the owl had only one eye! Our live-in babysitter, who was a high school art student, had to draw in a second eye before I could listen to the story without screaming my head off.