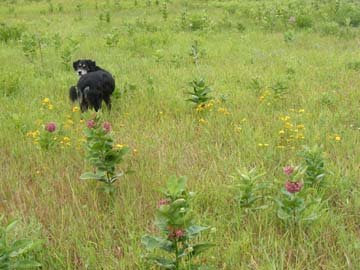 It’s raining, it’s pouring, it’s not good weather for a long dog walk (picture above is from yesterday morning), but the ambience is cozy for my continuing reading of The Death of Woman Wang, by Jonathan D. Spence, an account published in 1978 of events in a small region of rural China in the seventeenth century, T’an Ch’eng county, which in that time period simply could not catch a break. If it wasn’t flood, it was drought and famine or bands of roving butcher-bandits in search of plunder and victims of soldiers requiring to be fed and sheltered. One year after another, crops were lost, families starved or murdered, and still the taxes came due. Of the “observers” (as Spence calls his sources), P’u sung-ling is definitely my favorite. In his stories, miracle and fantasy come interpenetrate reality, and there are moments of prosperity and occasional happy endings. Surely the people of T’an Ch’eng, gone so long now, deserved prosperity and happiness as much as anyone! P’u did not have an easy life himself, and there is plenty of murder and misery, hardship and poverty in his stories, but even at that, in his fictional renderings he was kinder to T’an Ch’eng and to himself than Fate had been. 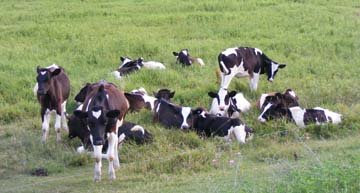 David and Sarah and I went for a slow county cruise Saturday night here in Leelanau, where fields of green alfalfa and lush corn, bales of hay, orchards bent down with cherries and sturdy, healthy livestock made a picture of prosperity and good fortune that contrasted sharply with my reading. If this rain keeps up too long, the sweet cherries will take on too much water and split, and growers’ hearts will break over the loss of a beautiful crop. Ironic, though, that the better the overall crop, the worse the price and vice versa. It seems perverse. In any case, no one in Leelanau will face starvation. 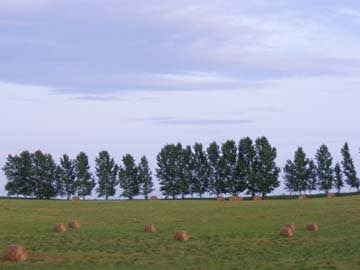 Dog Ears Books had a lot of visitors on Saturday. Many friends who had not been in Northport for a while showed up, along with one couple who had not visited before, Larry Nelson of Stray Dog Bookstore in Three Rivers, Michigan, and his wife, Nicola. (Bookman’s holiday!) 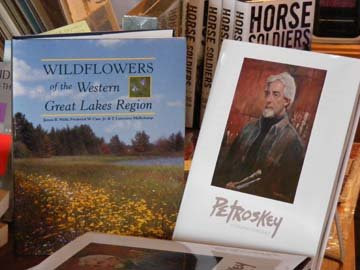 Between visitors, I found time during the day to be transported by lovely images in two big, beautiful books, Wildflowers of the Western Great Lakes, by James R. Wells, Frederick W. Case and T. Lawrence Mellichamp, and Fred Petroskey: A Leelanau Portrait, by G. R. Kastys, both of which seem rather expensive until one thinks of all the years of happiness each volume will provide. One of the joys of being a bookseller is to hold and turn the pages of books like these, to place them into new hands, and to send them on to new homes. I feel I am thus, in my modest way, sending joy out into the world.

Finally, I've photographed Queen Anne many times but never, I think, more successfully than this. 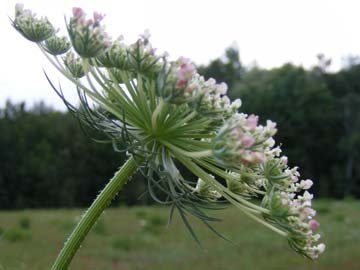 That's a lacy parasol fit for a Queen! What's wanted this morning, though, is a serviceable umbrella, or a full rainsuit with wellies. It is pouring over here, and the sweet cherries have already cracked. Agricultural pursuits are not for the faint of heart. Nor is independent bookselling, come to that, but fortunately we have amongst us the brave and stubborn!

Oh, yeah, they split. Poor cherries! All that work, by humans and trees alike! The independent bookseller in Northport had a better weekend than the orchards, though. I sold a couple paintings out of the Painted Horse Gallery today, too.