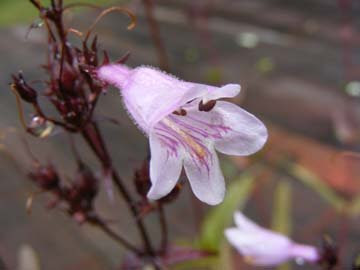 The flowering perennial known as penstemon, or beardtongue, seems currently out of fashion in gardens, judging from the many nurseries that do not stock it at all or have only a single plant left over from last year, though the penstemon site I just visited claims the species is “growing in popularity.” The flowers of the variety (or two?) I have found are unspectacular. Lovely in close-up, to the casual glance they are small in size and pallid in hue. You would not pick a bouquet of them. (A few stems, however, provide subtle surprise in a mixed arrangement.) No, it is the foliage that I find so pleasing, providing contrast against spears of green iris leaves and a color bridge between the red of a Japanese maple (out of camera range in this shot) and the flowers of lavender. 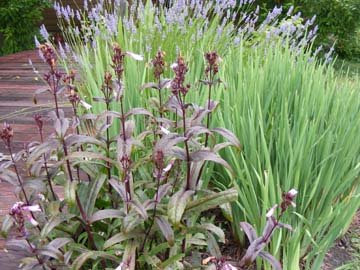 In a small garden, the restfulness of a limited color palette in blooms can be offset by variety of color and texture in foliage, without any sacrifice of simplicity of serenity. Thus my plea for penstemon. Find it, plant it, love it!

In a recent discussion, a friend defended creative financial “products” (the conversational scare quotes my own, not his), and I told him I think part of the problem began when banks started calling various services and schemes “products”--and getting away with it--when nothing new had been produced. Friend didn’t back down, saying something had been produced, in the form of intellectual property. My position, as the Muse next had it emerge from my lips, was that the so-called “products” were only “augmented promises,” with no increase in value to back them up. “’Augmented promises?’” Friend exclaimed, startled and suspicious. I never heard of that!” “Of course not,” I told him. “The phrase is my product. I just made it up. It’s a new intellectual property.” He snorted. But why? Because my words were meant to reveal rather than to hide, elucidate rather than trick?

Someone may write a song or a poem or a play or a novel, and that creation is intellectual property, something of value newly produced and available to others. People pay to hear songs, buy books, see plays. They get something for their money besides a way to get more money by escaping responsibility for loaning money. If a loan is not a product—and I don’t believe it is, though it may enable production of something else—then how is splitting it up, trickily, into untraceable little bundles some kind of production?

I have been reading a book by Simon Leys, published in 1985, called The Burning Forest: Essays on Chinese Culture and Politics. The first essay, on poetry and painting, drew me in; enmeshed, I have been drawn, fascinated, through the essays on politics. In the excerpt below, Leys is talking about so-called “China experts,” but what he says is beautifully applicable to economic experts of our own day:

The Expert should in all circumstances say nothing, but he should say it at great length, in four or five volumes, thoughtfully and from a prestigious vantage point. The Expert cultivates Objectivity, Balance, and Fair-Mindedness; in any conflict between your subjectivity and his subjectivity, these qualities enable him, at the crucial juncture, to lift himself by his bootstraps high up into the realm of objectivity, from whence he will arbitrate in all serenity and deliver the final conclusion. The Expert is not emotional; he always remembers that there are two sides to a coin.... After every statement, the Expert cautiously points to the theoretical possibility of also stating the opposite; however, when presenting opinions or facts that run counter to his own private prejudices, he will be careful not to lend them any real significance—though, at the same time, he will let them discreetly stand as emergency exits, should his own views eventually be proved wrong.

Economics, like politics, is too important to be left unchallenged in the hands of experts. We can no longer afford the proliferation of insubstantial products. We couldn’t afford it in the first place, but it has taken a while for the blank check we handed over to be charged to our account.

As for the Five Elements--Water, Wood, Earth, Fire and Metal--I cannot seem to leave them behind. Here are all five together in another of my gardens. This garden is sadly neglected, except when I visit it with my camera. 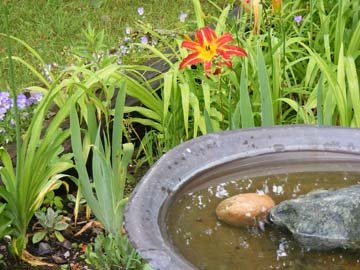 The penstemon looks so delicate and I love the foliage.

Your dawn meadow photo in the earlier post is magnificent!

Thank you, Mr. Neckmann. I am on a mission to spread the word about penstemon--can you tell?