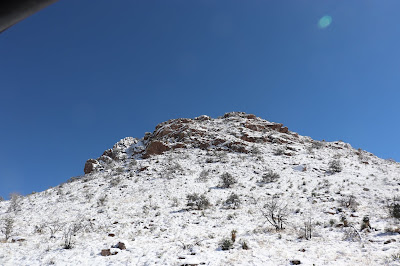 Snow, that is. We’re from Michigan and have seen lots of snow, and we’ve seen snow before in Arizona, too, both in the winters of 2015 and 2018 and now again in 2018-19. But when the forecast for last Friday promised “severe weather,” with possible accumulations of up to 22” at our elevation, that out of the ordinary. So when I got up Friday morning, then, after a night of wind and rain, I’ll admit I was disappointed to see not a snowflake in sight. The temperature was dropping, however — not what temperature generally does here between 6 and 8 a.m., but drop it did — and by 8:30 the rain at last turned to snow, and the white stuff came down nonstop all day. Well, down and sideways and sometimes even up.

We didn’t even walk down to the mailbox that day, let alone start the car and drive to town. Instead,  except for meals and a couple of dog sorties, we had quiet hours of reading and conversation — also lots of looking out the windows, on my part.

Saturday brought another blue sky morning, with bright sun shining down not only on snowy peaks but also on white mountainsides and snow-filled washes, every branch and twig of mesquite bearing its tracery of snow. I don’t know how long I stood gazing, mesmerized, at the south-facing cabeza, the one we see from the cabin, watching it disappear into and reappear from the clouds, changing moment by beautiful moment. 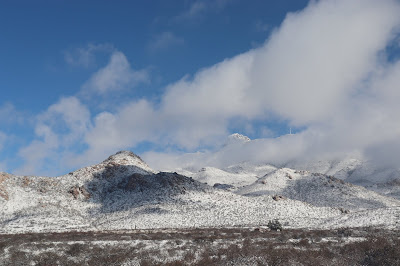 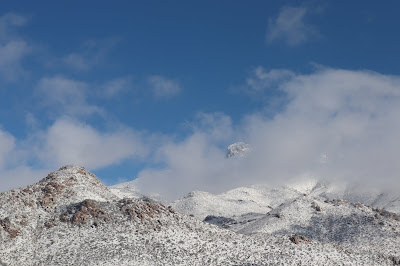 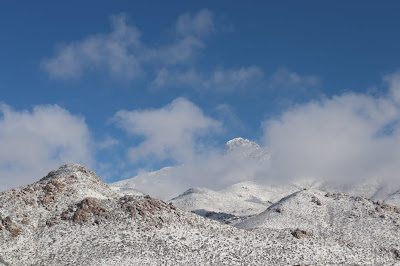 The gentler rises, the ones without dramatic rocky peaks, were transformed by snow, as well, their basic structures, contours, and stegosaurian ridges made more readily visible and obvious by the contrast of dark and light. 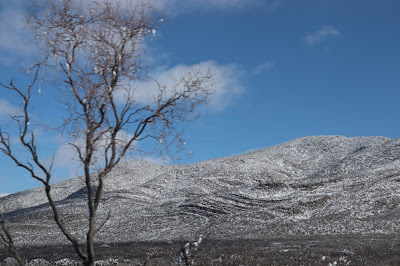 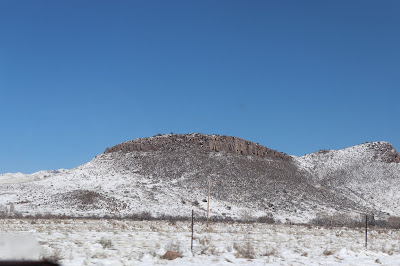 Mountain folds were softened, shadow effects made sharper. Overwhelmed on our drive to meet a friend in Willcox, and knowing the snow effects to be ephemeral, I couldn’t turn my head quickly enough to take it all in. 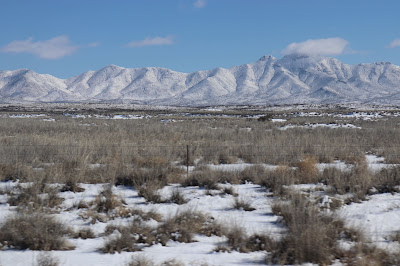 Then, the Artist and I couldn’t help but think: if mountains we knew as everyday neighbors were so breathtakingly and dramatically changed by snow, what would the always dramatic Chiricahuas be like on such a day? And how many opportunities would we have to answer that question for ourselves? Would there ever be such another winter snow in southern Arizona for us? Maybe not. And so we set out down the road toward the Chiricahua National Monument, a road that never fails to please and even to thrill on the most ordinary of days, which this was decidedly not. 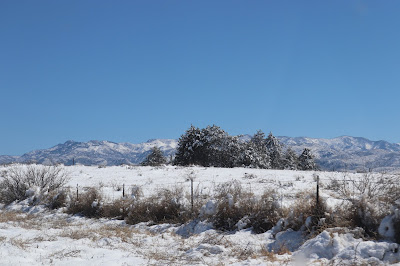 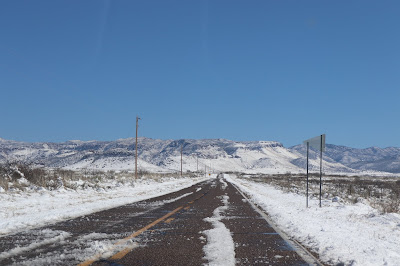 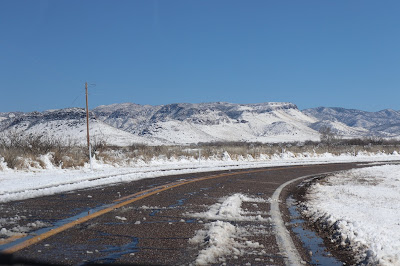 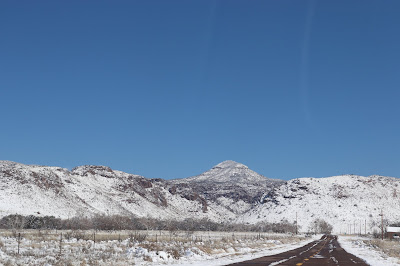 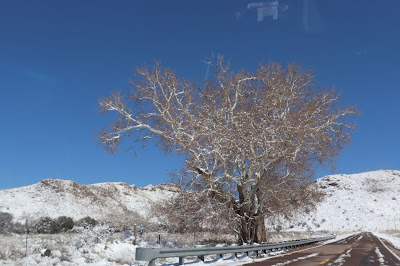 Oh, those ancient, majestic sycamores! What must it be like, ranching in such grandeur? 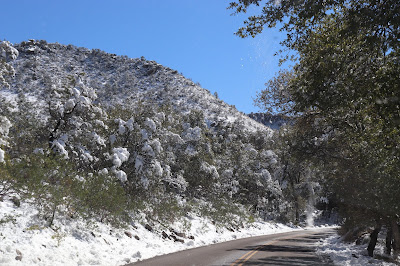 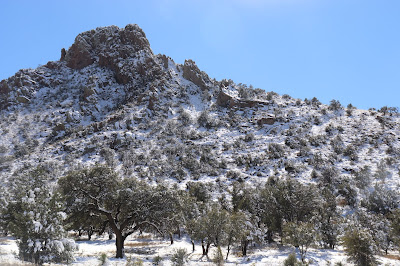 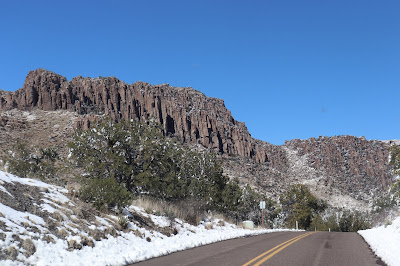 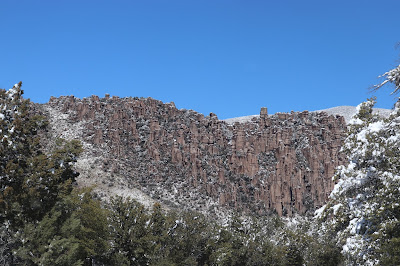 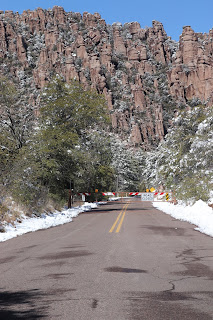 I was not disappointed that the road up to Massai Point was closed. The excitement of narrow, shoulderless, icy mountain roads I do not require. Anyway, we still had loveliness to encounter, by taking the road south from the monument to “go around the block,” the long way home, stopping to admire trees sparkling with snow in the washes. 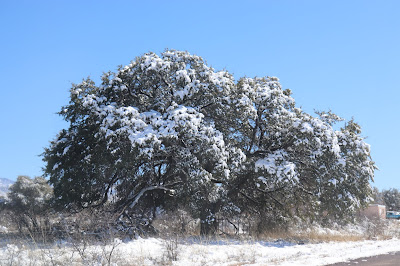 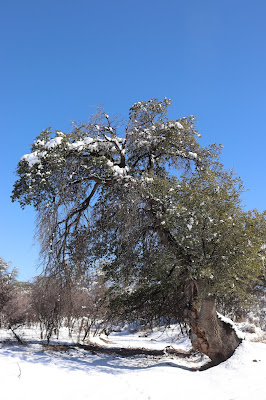 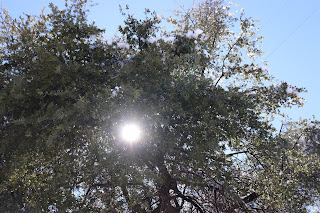 I’ve altered my final image for the day, a shot of Dos Cabezas as we neared home again, taking out the color to leave only black and white and shades of gray. The result, I think, emphasizes what snow does to highlight mountain contours. By late afternoon when this shot was taken, the snow had melted on the lower slopes. There was not a cloud in the sky, but see how the mountain makes its own shadows with a little help from the sun? Sufficient unto itself. 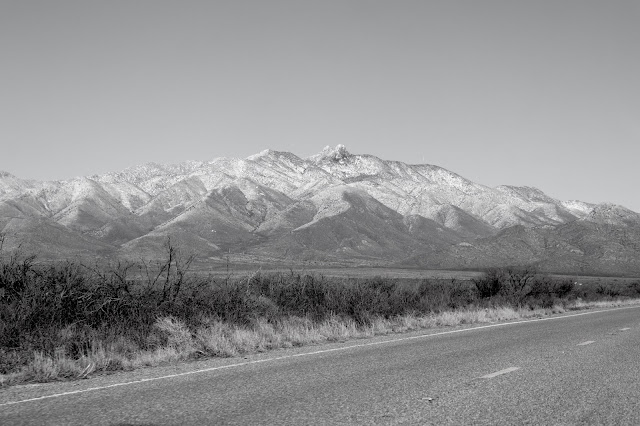 One more thing: I am currently reading John McPhee’s Rising From the Plains, which tells the story (among others) of the formation of Wyoming’s Rawlins Uplift and the formation of the Medicine Bow and Snowy Mountains, and not for the first time I am frustrated at not having the complete story of the origin of the Dos Cabezas Mountains. The Grand Canyon story is well told and widely available. The Rocky Mountains garner plenty of attention. The Chiricahua National Monument has brochures and books explaining the volcanic beginnings of that range of southeast Arizona “sky islands.” But more and more I realize that one story does not explain all mountain ranges, that every range has its unique history not duplicated exactly anywhere else on earth. And I want to know the history of my mountains, as well as that of others in the neighborhood. It occurs to me that if I were obscenely rich, I would commission a whole staff of geologists to research and publish the history of every mountain range in Arizona. What a project that would be! The first installment, though, would have to be the Dos Cabezas Mountains, because I am not living in the scale of geologic time and can’t wait ten million years.

…The Teton landscape contained not one the most complete geologic history in North America but also the most complex. …After half a century with the story assembling in his mind, he [geologist David Love] can roll it like a Roman scroll. From the Precambrian beginnings, he can watch the landscape change, see it move, grow, collapse, and shuffle itself in an intricate, imbricate manner, not in spatial chaos but by cause and effect through time. He can see it in motion now, in several ways responsively moving in the present—its appearance indebted to the paradox that while the region generally appears to have been rising the valley has collapsed.  - John McPhee, Rising From the Plains

This is what I want for the Dos Cabezas Mountains: a temporal scroll of its entire geologic history, the picture of its changes, as they unfolded, over all of time.

How did those particular mountains get there? Some of the many smaller ranges are less published and studied. There is some information on the Dos Cabazos here
based on U235 halflife as it turns into Lead as well as the geologic typography. It isn't very helpful, being written in 'geologicalese', but pp 779-778 (toggle down) offer a historical geology. The numerical terms ma and ga (mega and giga annum) are the more comfortable million and billion years. It would seem the formation took place in the late pre-cambrian in the larger time span of the paleoproterozioc with the volcanoclastic activity moving SW to NE over some 20-40 million years.
I suspect that might be out of your wheelhouse, as it is out of mine. Contacting the Geology Dept
at one of the AZ universities might provide enough interpretation and additional information to
put together an understandable story...maybe even a movie? :)
ps. you may need a geological time scale
to translate from the dry technical to the possibly very interesting story....

SIGH!!! McPhee provides the time scale in the front of his book, but the other thing he does is give a narrative to the changes through time, and that's what I want. Also, some of the rocks may be precambrian, but that doesn't mean the mountains looked then as they look now. It's all those millions of years in between that get left out.

One of the sad things I've learned from reading is that, in a way similar to sociology shifting from "qualitative" to "quantitative," geology has split into subspecialties, with "field geology" now being considered the most old-fashioned and bottom of the barrel. Field geologists are the ones who spend their lives outdoors, who recognize rocks and land formations by sight, who ask themselves questions about what they see and then form theories and look for evidence that confirms or disconfirms their best guesses. Modern (postmodern?) geologists mostly work in laboratories and with expensive instruments. Some of them come to geology from physics. They do not bother to obtain intimate acquaintance of specific locales. It breaks my heart.All that fancy information and no recognition of what's really there.

I only knew two geologists (MS). The first was a high school friend who spent summers prospecting with his uncle in the four corners. He
was so taken with the hands on prospecting that he got a masters. He knew much of formation, but mostly was looking for minerals, petroleum etc. The second was more theoretical, into chemical analysis and oddly accepted plate tectonics, while being a new earth
creationist type. (?!) I guess in come cases we end up with little technical information about mountain formation and are left with the
Native American stories of their origin?

BB, Precambrian outcrops in the area of Dos Cabezas certain show on a map of the state in Geology of Arizona, but the chapter on “The Precambrian Era” makes no mention of anything in Cochise County. A later chapter tells of the volcanism that formed the Chiricahua Mountains 30 to 20 million years ago and mentions metaphoric core complexes (magmas that did not reach earth’s surface, i.e., formed no volcanoes) that built the Pinaleños Mountains, north of Cochise County in Graham County. But what happened in the region of the present Dos Cabezas Mountains between the Precambrian and Tertiary periods? How were those mountains and the Dragoon Mountains formed? Lynn R. Bailey’s book, The Dragoon Mountains, notes that the range is generally rounded “in contrast to the mid-section and northern portion … which are serrated due to an intrusion of granite through the Paleozoic and Cretaceous rocks about seventy-three million years ago. Weathering {geologists call it exfoliation} of the intruded quartz-monzanite created rough and craggy terrain in the mid-section and at the northern end of the mountains.” Bailey tells us that folding and faulting were responsible for what came to be used as “passes” through the range from east to west and back. Texas Canyon, through which the present I-10 passes, is another region of exfoliated granite. — But how and how long ago did all these processes take place? It’s the timeline I want: a specific timeline for Dragoons and another for the Dos Cabezas Mountains. Because the latter look almost like a continuation of the Chiricahuas, and yet the Chiricahua Mountains were formed by volcanoes, not by “folding and faulting.” What meets the uneducated eye upon first acquaintance can easily lead the mind astray.

To change the subject, see my post after this one for the reason we could not go higher in the Chiricahuas after the snowstorm. If we'd tried a couple of days later, we wouldn't have been able to get as far as the visitors center!