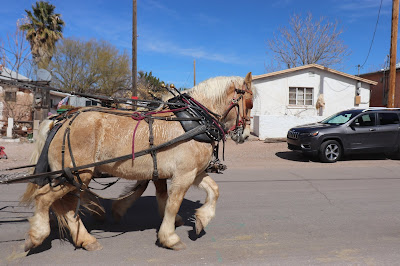 I don’t remember the context, but the observation was made to me years ago, with a Gallic shrug, by my friend Hélène: “One cannot plan everything.” So true, isn’t it? And while sometimes we chafe against life’s surprises, other times they are nothing but delightful and can even “save the day” once in a while. 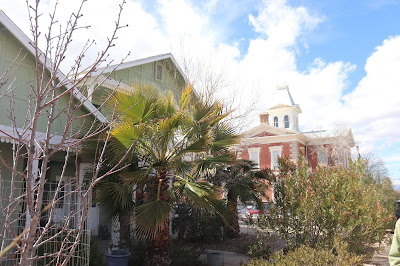 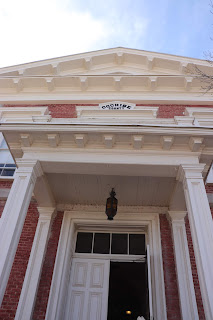 We had two objectives on Saturday when we made a trip down to Tombstone with a visiting friend. The first was stymied — rather, we were in accomplishing it — precisely because it was Saturday. Also, apparently, because it was Saturday the streets of Tombstone were thronged with tourist families, despite a biting wind. None of the three of us had ever seen such dense crowds in the Old West town before, so we had not expected to find so many full parking lots or such lines waiting for restaurant tables. Doubtless the visitors were having a wonderful time. At least, I hope they were. We three, however, had had a quieter day in mind and decided against achieving our second objective, possible though it was. Instead we made a beeline for an open door we had spotted while circling blocks looking for a place to park. 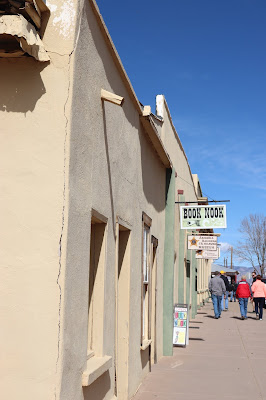 A little “book nook” called our names. It turned out to be another Friends of Library bookstore, and not even really a store, because, as the volunteer at the desk explained, “We don’t sell books. You just leave a donation.” So we did, all three of us, and our otherwise pointless trip enlarged our personal libraries. 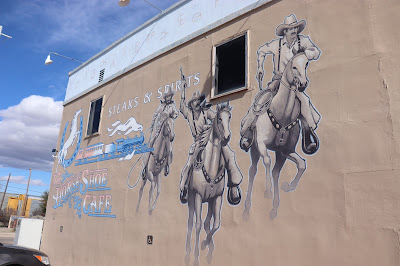 Is a last-minute idea a plan or something else? Cold and hungry, we took refuge in Benson at the Horse Shoe Cafe. Stopping in Benson also gave us the opportunity to introduce our visiting northern Michigan friend to the work of a Southwestern artist acquaintance, mural painter Doug Quarles. 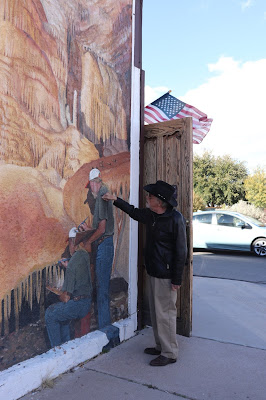 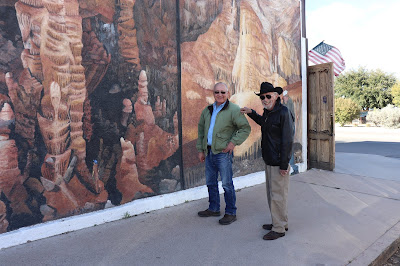 On Sunday, we started out with a sketchy plan, but a plan nonetheless. Only a few miles from our winter cabin is the road leading to Apache Pass and what is left of old Fort Bowie. Twice I had been thwarted in attempts on this road: the first time, my friend Clare and I wanted to hike the trail to the fort ruins, but a flat tire on the road in put the kibosh on that plan. When the tire was finally changed, I couldn’t blame Clare for not wanting to tempt another on that road. Then last year the Artist and I turned in but went less than half a mile before the washboard surface determined him to turn around. The Artist hates washboard! But knowing I have had a yen to explore Apache Pass Road, the Artist suggest we give it another try. And hallelujah! There were only hints of washboard now and again!

And oh, what a wonderful surprise! I hadn’t thought it through, I guess, because I’d pictured a continuation of the straight road — not minding that, because of beautiful grassland, grazing cattle, and mountain views — until we got to a parking lot. It was so much more than that! 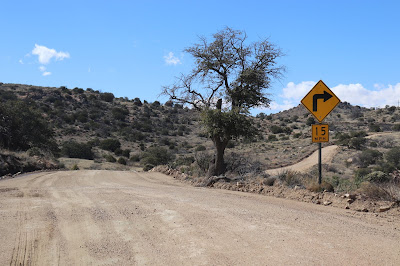 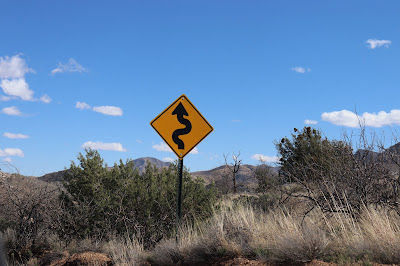 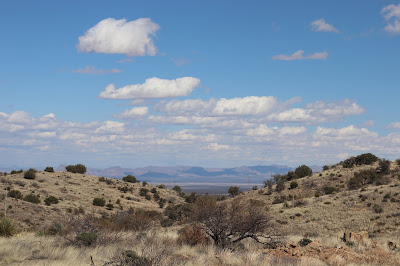 Signs warned in words and with icons of “curves” and “mountain grades” as we proceeded. I thought of travel with my parents and sisters in Kentucky and South Dakota and how we girls loved signs promising winding road ahead.

We stopped at trailhead and read information on the kiosks and picked up an informational brochure with map. Sarah would have been happy to take the mile-and-a-half trail to the old fort, but it isn’t that much fun having a dog on a leash on a trail. Also, the wind was very cold! And the Artist wasn’t really up for the hike, anyway, though I explored a few steps to find small yellow flowers in bloom, which of course only whetted my appetite for more of the trail. 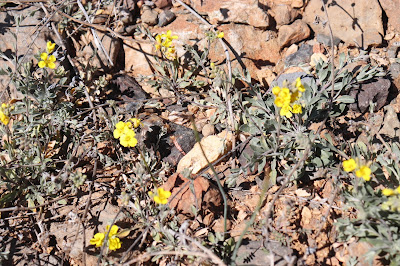 (Readers, could this be comb draba, Draba oligosperma, a member of the mustard family, even though Audubon’s Field Guide to North American Wildflowers, Western Region, does not include Arizona in comb draba’s region and gives its flowering time as May through July? If it isn’t comb draba, what is it? The flower definitely has four petals, and the leaves are leafless and hairy. Arizona people, can you help out here?) 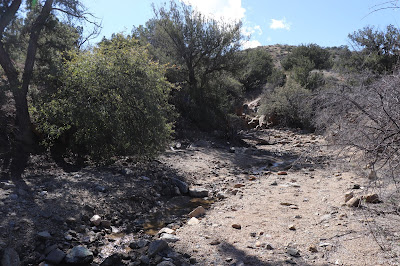 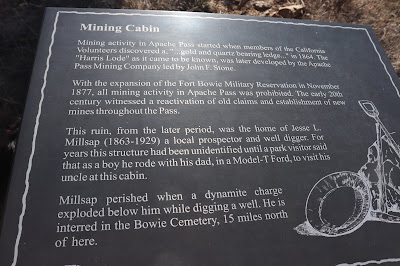 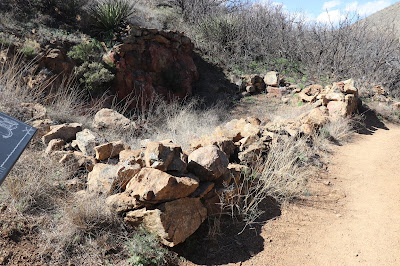 Our Michigan visitor and I went down the trail just far enough to cross the creek (I can never resist the sight of running water) and inspect the stone ruins of an old miner’s cabin before our whole party continued by car on the exciting road — which, after a while, much to our surprise, turned into paved road. It was then we remembered that we could stay on this road clear to the other side of the expressway to the town of Bowie on our way back to Dos Cabezas. 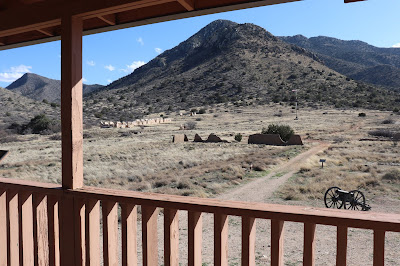 Construction began on the fort in July of 1862, and it was closed in 1894, eight years after the “Apache Wars” ended, i.e., after Cochise (hereditary chief) and Geronimo (public spokesperson) surrendered to the United States government. Fort Bowie was established as a national historic site in July 1972.

(I was baffled for a long time by the local pronunciation of Bowie. “Boo-ie,” people around here say. The explanation, it turns out, is that the fort was named for regimental commander George Washington Bowie, who pronounced his name with the ooh sound in the first syllable, unlike James Bowie, who claimed to have designed the first Bowie knife.)

The fort ruins and visitors center, like Apache Pass Road, were much more than we expected — ruins more extensive, visitors center more welcoming and informative. 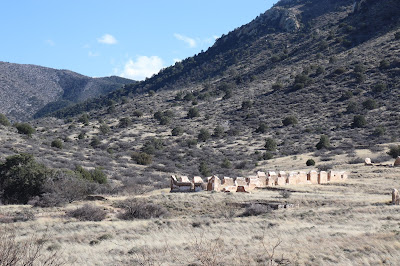 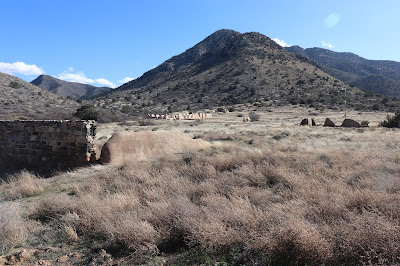 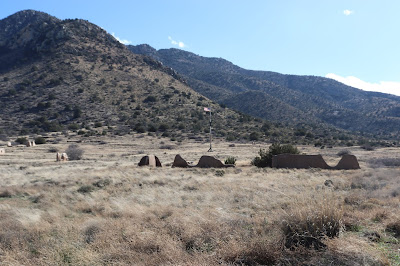 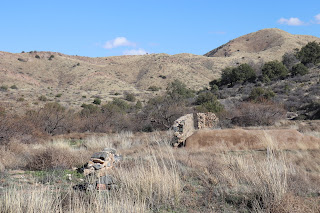 If I am interpreting the site correctly in light of the historic map recreation, the remnants of stone wall, set apart from adobe remnants, originally housed the fort’s powder magazine and gun shed. Corrals and stables were to the left in my photographs, barracks and quarters to the right. 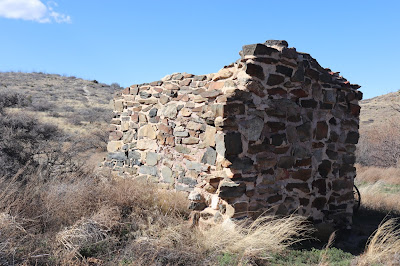 Naturally, I could not leave the visitors center without a book. Here is the one I chose — this time — but I will be reading about Cochise and his son, Naiche, for a long time to come. 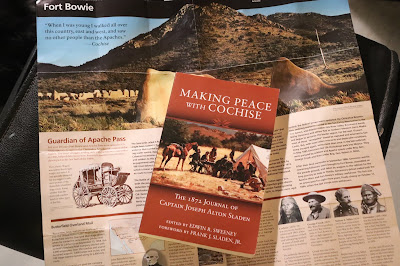 Fort Bowie merits more than a single visit, and I am resolved to hike the trail before this year’s Arizona season comes to a close. Leaving to continue north to the town of Bowie, and from there to I-10 back to Willcox, we circled back southeast at last, having made a complete circuit around my beloved Dos Cabezas Mountains. Much more of an expedition than we’d set out on, but definitely worth the extra effort and a slight departure from the original sketchy plan. 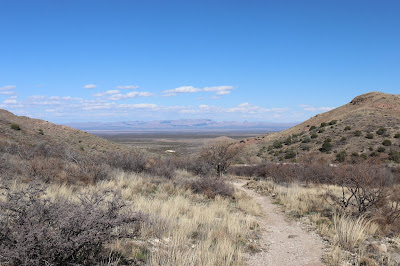 It all sounds and looks wonderful! We thought we'd be in Phoenix in a couple weeks, but things got complicated and now we are going to try to get out there the end of March or beginning of April. Maybe. Talk about sketchy plans!

Dawn, I call mine "the revisable life"! Makes sense, don't you think?

Circling the mountain range sounds like a desert wilderness trip. Ft. Bowie sounds fascinating. I looked up the cemetery near the fort and concluded that being a
mail carrier in those days was extremely hazardous!

Definitely hazardous work, carrying the mail through the mountains in the 19th century!

But -- no one is helping me out with those little yellow flowers -- ???