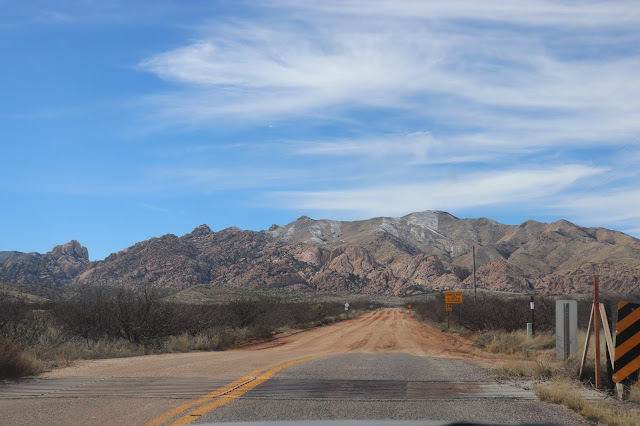 …The Dragoons’ rocky mid-section was a seasonal campsite of the great warrior Cochise. His bones rest somewhere on the east side of the mountains.


It was Cochise who endowed the Dragoons with an almost mythical quality.

- Mines, Camps, Ranches, and Characters of the Dragoon Mountains, by Lynn R. Bailey


As had been the case with our expedition to old Fort Bowie, the road to Cochise Stronghold far exceeded our expectations. We had anticipated the straight road west from 191 to end at a parking lot near a trailhead. Nothing more, but, once again, our expectations fell so far short of reality that as we made our way back to Dos Cabezas later in the afternoon we were still distracted by what we had seen, mentally reeling, and hardly able to think about anything else.

For a while, though, it looked as if the adventure would be put off for another day. Having forgotten to look at the gas gauge before reaching Sunsites, the horridly named rural subdivision on the outskirts of the ghost town of Pearce (the name it uses for its post office), we discovered that the Sunsites community has no gas station. A former gas station and convenience store back the road a piece was closed up, out of business. So, back to Willcox or on to “The Thing,” a combination food/gas/souvenir stop on I-10? I voted for “The Thing” but wanted to take Dragoon Road only as far as North Johnson Road, even knowing the latter to be unpaved. And so it was, not only unpaved but, in many stretches, washboard — not the Artist’s road surface of preference; however, we both appreciated the absence of fences and the scenery in general, and my longstanding curiosity about Johnson Road was finally appeased. So if we saved the Stronghold for another day, this day’s drive for me had still been worthwhile. But though we took I-10 back east from “The Thing,” we took the first exit south, 191 again toward Sunsites and the road to Cochise Stronghold.

… [B]ut now the air is so clear that one can see the breaks in the rocky face of the mountain range, though it is fully twenty miles away. It may be further. Who of the desert has not spent his day riding at a mountain and never even reaching its base? This is a land of illusions and thin air. The vision is so cleared at times that the truth itself is deceptive. 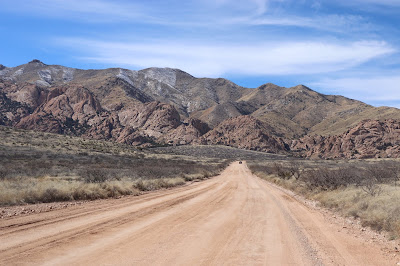 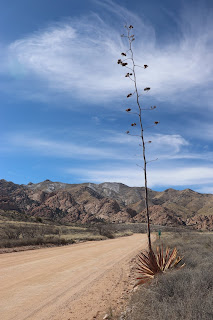 A mountain ahead is always impressive. Also, while one continues to move toward it, one also has the paradoxical impression that one will never arrive. Closer and closer, larger and more impressive, more detailed and multifaceted, the Cochise Stronghold section of the Dragoon Mountains is no exception to this experiential rule. But even this much — being still a distance from the mountains, on a more or less straight road — takes one’s breath away. All the more so, then, when pavement comes to an end, and a red dirt road stretches ahead to disappear as it turns south into rocks and trees. Full of anticipation, then, but not at all impatient, because each moment was already perfect, we advanced slowly, feasting with hearts and eyes. 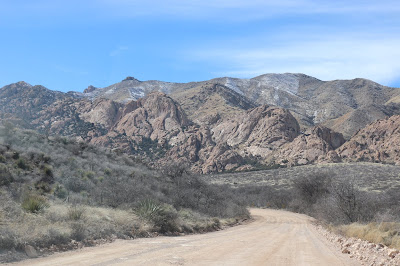 And then our road turned and began to wind above a rushing mountain creek, brimming with snowmelt, with lovely trees around each curve. “I didn’t expect this!” “Neither did I!” Oaks! Manzanita! Running water!

“Winding about among the foothills, we at last struck the bed of a crooked stream, and following it back, up a moderate ascent, through a narrow pass, rock bound on either hand, we entered a gradually broadening valley in the very heart of the mountains….


“As we looked back on our trail, we saw that our entrance had been through a narrow canyon; at the further end, was another canyon similarly protected.”

We came to a temporarily stranded motorist, driver sitting in the driver’s seat, hood up on his old sedan. “Just givin’ ‘er a chance to dry out a bit,” he said, in response to our inquiry. “That last one was pretty deep. But my car’s older than yours. You should be okay if you keep to the right.” 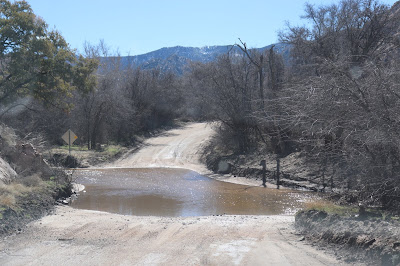 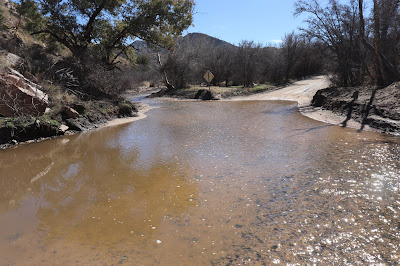 Reconnoitering on foot around the next curve, I found water, deep and wide, flowing over the road. As the other driver had explained, though, it was shallower on the downstream side, and if we kept just to the edge of the pebbles (right side of photo below) we should be able to ford safely. And so we did, and on we went, enchanted. 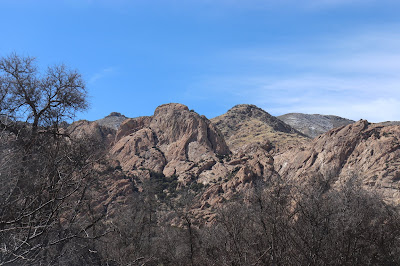 The next bit of water over the road was every bit as wide but did not seem as deep. More confident after one success, on we went. I should note that the Artist was at the wheel. I had been driving when we turned onto Ironwood Road, but he offered to change places so I would be free to deploy my camera more readily. 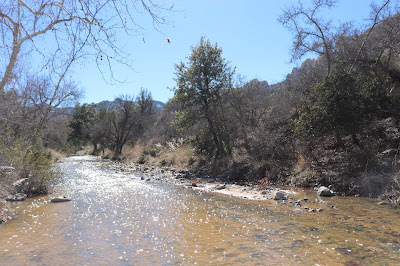 Have you ever noticed how excitement sharpens appetite? And that excitement itself is most pleasurable when taken in alternation with spells of rest? So we felt, anyway, when a parking area off the side of our road beckoned. The sign said “VEHICLES WITH HORSE TRAILERS ONLY,” but there were no horse trailers in sight that day, so we “deplaned,” as it were, long enough, first, to stagger around and exclaim at the beauty of the spot, and second, to sit on a bench and refresh ourselves with water and sandwiches and trail mix. To have horses in such surroundings! Heaven on earth! And did someone live here once? What is the story of this old stone building? 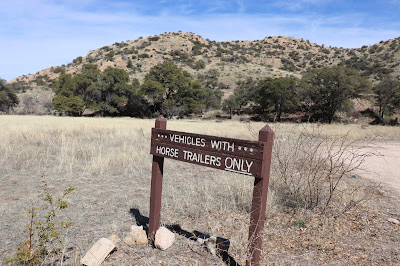 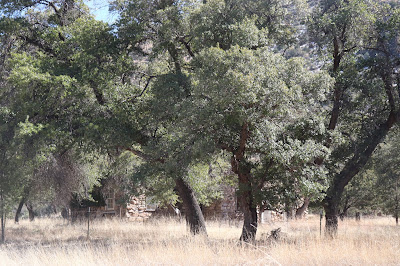 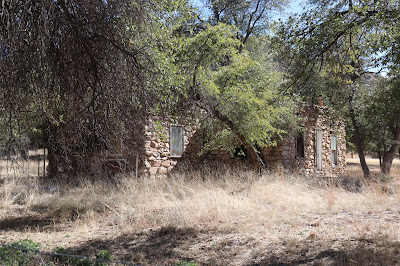 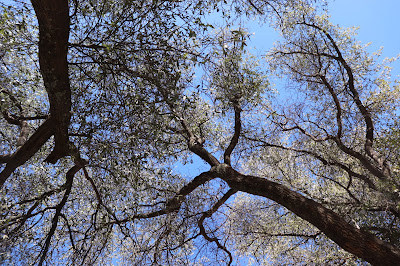 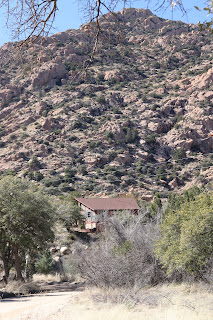 Surprisingly to us, there are bits of private property along the access road to the campground and hiking trails, and here and there a house. One perched dockside above the rushing mountain stream. Which site would be preferable, one on the mountain itself or one some little distance back with a view of the mountain? The Artist, naturally, voted for a view site. I don't know. I like the hidden-away aspect of the mountainside. 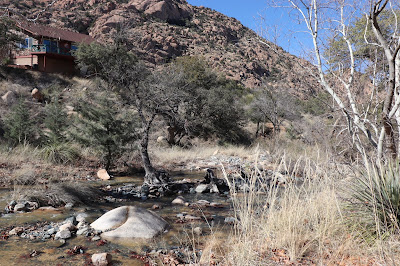 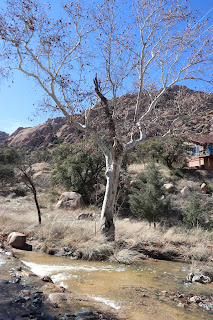 Eventually we came to a sign telling us we were within half a mile of the official campground, but soon destiny decreed that we would reach no farther that day. After four successful fords, we agreed that this last water crossing looked problematic. Not to put too fine a point on it, deeply problematic. And the mountain would be here another day, when the water across the road would be much shallower if there at all. Ten million years from now, the mountain may not be there in its present configuration, but it is there now, and we, though not here forever, are here now. 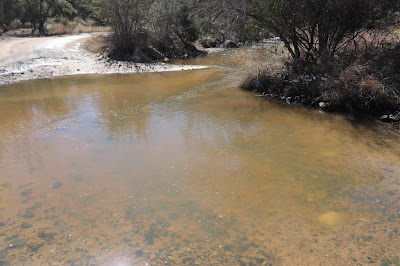 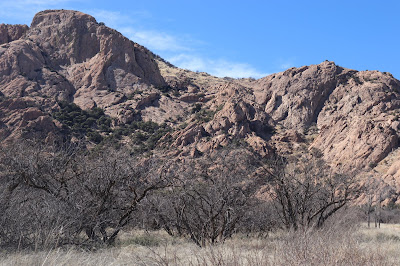