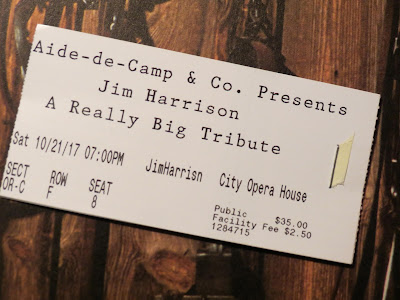 Down by a couple of ponds outside Willcox, Arizona, back in early 2015, I pursued a flash of brilliant red with my camera and captured, to my great delight and excitement, an image of a vermilion flycatcher, a bird I had never expected to see. I am hardly what might be called a “birder,” serious or otherwise, but even my aviphobic husband, the Artist, became somewhat interested in the birds of Arizona. We went out of our way, for instance, to pilgrimage to the western wintering grounds of sandhill cranes. But that solitary vermilion flycatcher was more a private triumph for me, one I could hardly wait to share. “Is it a big deal?” David asked. Not excited. So when we planned a trip from our Cochise County home base to Santa Cruz County to visit old friends, I was eager to share my sighting, knowing they would appreciate what a big deal it was. And that was a lovely evening we had in Patagonia, sitting outdoors outside the restaurant (so Jim could smoke) long after dinner was finished and darkness fallen. I hoped for many more such evenings, but that was our last with Jim and Linda, as she died the following fall and Jim less than half a year later. 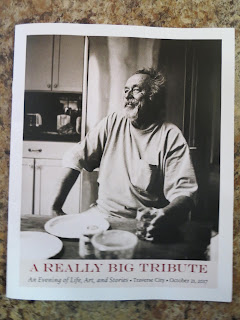 Saturday evening at the Opera House in Traverse City we attended an event billed as “A Really Big Tribute: An Evening of Life, Art, and Stories,” the event taking its name from a posthumous collection of Jim’s essays on food (and life and art and stories) titled A Really Big Lunch. We had no idea what to expect. Also, while I had taken my camera in the car, I decided against taking it in with me for the evening (though I’m sure other people will be posting pictures on Facebook and elsewhere), so my report will be idiosyncratic and sketchy at best.

In the course of the evening, various people from Jim’s life spoke of their friendships with him and their work with him, and they read from his work and from work that he had found meaningful. I cannot attempt to capture the overwhelming flood of detailed memories, but here are the speakers, in order of their appearance:

Gary Wilson, event planner and “silent partner” in planning the evening of tribute

I am serious when I say that the deluge of personal memories presented by this cast of participants was overwhelming. So many people, so many stories, so many different perspectives on a man and writer so many of us loved! All the words continue to roil and tumble in my heart and mind, but certain phrases struck deeply in the moments they were uttered:

Afterward, old friends were gathering here and there in Traverse City to continue the evening, but David said if we went anywhere at all, he would be most inclined to stop at the Blue Bird in Leland for a drink, “for old times’ sake,” since in many ways that's where it all used to happen. We wondered a bit what we would find there and if the bar would be filled with rowdy young strangers up for fall color. "If it looks impossible, we just won't go in." Fine.

Happily, not so. There were half a dozen or so people seated at the bar, one of them old friend Cris Telgard (who had been at the "Tribute," too), and the atmosphere calm and welcoming. We were happy to “belly up to the bar” with Cris and have him introduce us to a couple of new Leland residents -- with ties of blood, as it turned out, to old Leland friends. David was soon engrossed in conversation with the new couple, and Cris and I fell into Arizona talk. Then --

“Wait a minute,” he said. “I have to run out and get something from my car.”

It was a magazine.

About a year earlier, he had bought an old copy of Arizona Highways from September 1951, the month of his birth, in near-mint condition, with the entire issue devoted to cattle ranching and cowboys. Cris didn’t find much in the issue that spoke directly to him, but there was one feature he knew would speak to me, and so he had been carrying the magazine around in his car for months, waiting for our paths to cross. Never mind that we live only about 7 miles from one another – all of us tend to become very busy with our own lives, especially when we have businesses to run. 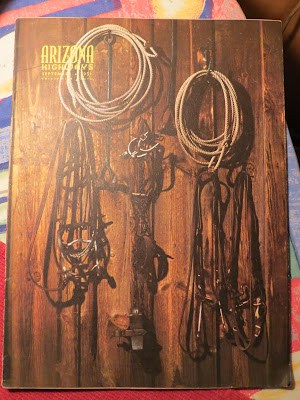 Cris encouraged me to open the magazine and look for the reason he was giving it to me. “Keep going,” he said – and there it was! “My little cow town!” 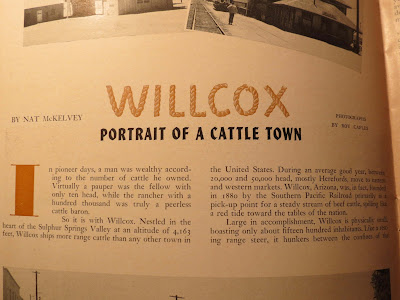 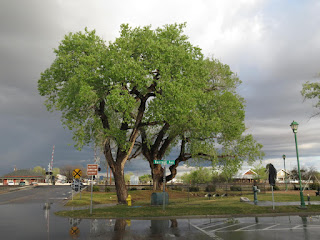 I’m sure the residents of Willcox would be taken aback to hear their town called “little” and particularly to have someone who spent only three months there – and not even in Willcox but out in the ghost town beyond the playa – using a possessive pronoun in connection with it. I wrote down “Red Rock West” and the name Nicholas Cage on a bar napkin for Cris so he wouldn’t forget to look for a film I love because of its Cochise County setting, and Cris urged us to stop overnight in Mesilla on our way West this winter. Because – yes – after three years of wondering if I would ever see the ghost town again, we will be returning to Dos Cabezas.

There will be bittersweet moments, I know. For one thing, we will not have the happy thoughts of Jim and Linda over in Patagonia, an easy day trip away. But we will once again have cows in the yard and coyotes yipping and howling and singing in the mountains at night (as they do here at home in the woods and fields of northern Michigan). We will have Arizona’s winter birds and the dry mountain air that lets me breathe so easily. We will have yellow legal pads (I have already bought a pack) for our winter’s writing, along with David’s paints and canvases and my sketchbooks and pencils. And we will have, besides memories of our first sojourn on the frontera, time for new experiences to form new memories, attached to the former like a new layer of sediment on older solid rock. 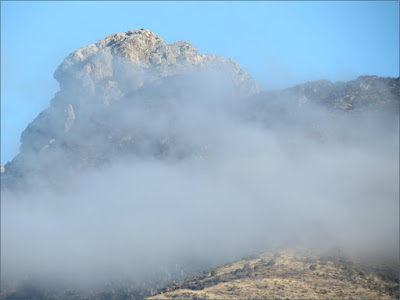 When we finally got home on Saturday night, we were shocked to discover that it was already Sunday morning, 1:45 a.m. to be precise. In the old days, that would have been no reason for a party to end, but these days are different. We couldn’t remember the last time we had been out so late.

It was more than worth it. The memories, the old friends, the stories -- then wrapping up the evening with Cris at the Bird to bring it all back home again. Perfect.

And it was 2 a.m. before we went to bed! In the old days, that would have been nothing, but nowadays that spells a really big evening. 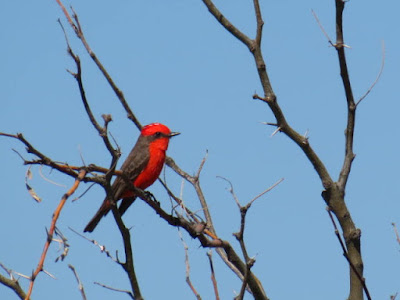 What a wonderful evening.. thanks for taking us along for the ride...

That settles it. I'm going back to blogging. One way or another I have to get my work done!

I look forward to the news from the frontera. Don't forget your camera.

Glad you could come along, Barbara! Gerry, forget my camera? As in, forget my head? But yes, please, do return to your blog! MANY of us have missed it!

Spectacular. Thx for sharing the thoughts!

YESSSSSSS! I was hoping that someday somehow you'd be able to get back out there for a winter! I am so excited for you!

I'm excited for me, too!