In most places and most of the time, liberty is not a product of military action. Rather, it is something alive that grows or diminishes every day, in how we think and communicate, how we treat each other in our public discourse, in what we value and reward as a society, and how we do that. 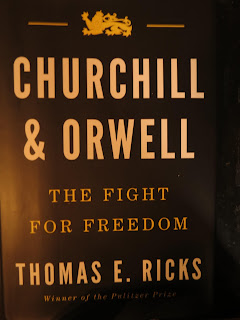 Coming to this book on Churchill and Orwell, it didn’t hurt that I had read Orwell’s Homage to Catalonia not long ago and still had that story pretty fresh in my mind. Orwell identified as a Leftist all his life, but Catalonia opened his eyes to the true nature of the Communist Party. He quickly realized that the Communists were every bit as totalitarian in their approaches and their aims as were the Fascists and that his real enemy, therefore, wherever it reared its ugly head, was totalitarianism.

He would leave Spain resolved to oppose the abuse of power at both ends of the political spectrum. After Spain, observed the literary critic Hugh Kenner, he would be “a leftist at odds with the official left.” “It is unfortunate that so few people in England have yet caught up with the fact that Communism is now a counter-revolutionary force,” Orwell wrote in 1937.

Churchill, in a strange way, was more a presence in my life as far back as I can remember. “Winston Churchill without the cigar” is how my parents described their first baby (me). But I had never studied his life, so Churchill’s many political setbacks and disappointments (both before and after WWII), as recounted by author Ricks, gave me a new perspective on the British leader’s startling tenacity. Before England’s declaration of war against Germany, Churchill had been unpopular both personally and for his belligerent views.

The leaders of the Tory Party felt [in the 1930s] that as part of keeping Hitler mollified, Churchill must be excluded from a position of leadership.

But in 1940 Hitler began his invasion of Holland and Belgium, bringing Parliament at last to a realization that Chamberlain must go. So Chamberlain would resign, but who would replace him? Lord Halifax, the king’s first choice? Lord Halifax who had requested that the British soccer team give the Nazi salute when playing against the German team in Berlin? No, said Chamberlain, Churchill is the man you want. And so Churchill was appointed rather than elected to serve as Prime Minister.

“I hope that it is not too late. I am very much afraid that it is. We can only do our best.”

Churchill never sugar-coated the truth when he spoke to the English people, and they trusted him for that, almost instinctively it would seem. Neither Churchill nor Orwell was willing to forsake truth for a party line, and both at times suffered for their inflexibility when it came to truth-telling. For instance, largely because the U.S.S.R. had been an important wartime ally of Britain and the United States, Orwell had a hard time finding a publisher for Animal Farm -- surprising difficulty considering publishing track record up to that time.

Both men also had strong opinions and made sure they had facts to back up their viewpoints. Orwell especially proved a ready willingness to change his mind when faced with facts repudiating his earlier position. It must be admitted, however, that either would have been a difficult life companion.

Churchill was as relentless as a terrier in his pursuit of facts but at dinner parties would launch into monologue, showing so little interest in other people’s lives and stories that he would even recite memorized poems to ensure his ability to hold the floor. He always knew more than anyone else about the topics that interested him, and he had no patience for any other topics. Then there was the drinking. All in all, difficult!

Orwell, unpretentious in dress and manner, comfortable with and sympathetic in general to common people, was overly sensitive to smells, but worse – the real deal-breaker for me – was the lack of self-awareness he showed in what Ricks calls his quick and casual prejudice against the Jews.

The fact of the matter is that Orwell was always tin eared about Jews. During World War II, Orwell would write extensively against anti-Semitism, but in the course of doing so he failed to reexamine his own writings of the previous decade. After the war, he had surprisingly little to say about the Holocaust....”

It is easier to find excuses for his anti-Zionism, since he was suspicious of all nationalisms, but was this particular nationalism more distasteful to him than others? One cannot help but wonder.

Churchill’s genius lay in seeing the Nazi threat for the world danger it was; his virtue was believing in the courage and perseverance of the English people, despite the many strikes against them at the outset of the war. Heaven only knows where Western civilization – and one uses the word with some trepidation in this context – might have gone without Churchill holding out against Hitler and against all the appeasers in the British aristocracy and government.

Orwell’s intellectual gift was his ability to see through party propaganda and cant to the dangers of totalitarianism on both ends of the political spectrum, and his artistic gift, in a spare style very different from Churchill’s oratorical writing, enabled him to bring that clear-sightedness to life in dramatic popular fiction.

What would Orwell make of our world today? Ricks notes that the question is often asked. Notably, individuals living under repressive regimes the world over recognize in 1984 the way their governments twist truth and relentlessly curtail freedom. Also, ironically, apologists from both the right and left eager to claim him as their own.

In 1984, protagonist Winston Smith lives under constant state surveillance. Fear of Big Brother and Communist repression of individuals dominated political discussions in the United States throughout the second half of the twentieth century, explaining why so many agreed with the slogan, “Better dead than Red.” Big government, regardless of party, was the enemy to be feared. Ricks points out that today’s surveillance in our own country is done more often by business than by government. It is not “the State” but “the Corporation” that follows Americans through every step of their day, noting what products they buy and use, which entertainments they most enjoy, and how they interact with family and friends.

Orwell saw that people might become slaves of the state, but he did not foresee that they might also become something else that would horrify him—products of corporations, data resources to be endlessly mined and peddled elsewhere. He would no doubt have been a powerful critic of such things.

And so, once again, two political extremes face Americans. This time the dilemma popularly posed (i.e., in misleadingly simplistic terms) is not between Fascism and Communism but between unrestrained “predatory capitalism” (the leftist view) and what has been called a “nanny state” (the rightist view). But as was the case with the twentieth-century dilemma posed between Fascism and Communism, I would argue that today’s debate too begins with a false premise. There are avenues and choices beyond simply a “nanny state” and unrestrained “predatory capitalism”), and we should, in the name of freedom, reject both extremes.

Unhappily for the present moment in our country, the State and the Corporation have joined forces, with the State holding onto its authority over citizens at the same time that it grants the Corporation, now legally recognized as a “person,” huge unfair advantage over us. Our own Congress! Over and over, they purport to be “saving” us from a "nanny state" by stripping us of legal, environmental, and other health protections rightly the role and responsibility of government. (We may be moving toward a “police state,” but at the moment we are definitely galloping away from anything that could remotely be called a “nanny state”!) At the federal level (and in many states), executive, legislative, and judicial branches appear to have agreed to sacrifice the interests of American citizen to rich and powerful corporate interests. The latest such legislative move protects financial institutions against citizens’ class-action suits. Anyone who is surprised, however, hasn't been paying attention. Farmers have had to pay attention, because their oxen are being gored, outrageously, on a regular basis.

This is a fine mess we’ve gotten ourselves into! Where is an Orwell to show clearly of the dangers we face? Where is a Churchill to lead us back toward freedom? 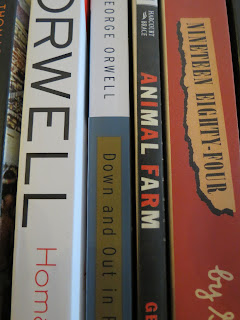