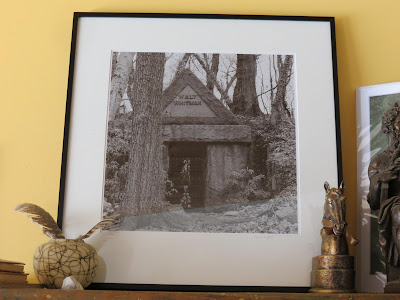 After nearly a quarter-century in business, I have a pretty good idea who appreciates my bookstore. The appreciative may be regular local browsers or people from far away who visit once or twice a year but never leave empty-handed. (“This is the high point of our trip,” one such customer-friend said to me this past summer.) They may ask me to order something for them when I don’t have in stock what they need, rather than ordering it themselves online. We share news of family and friends and pets and travel. Selling books to my staunch supporters is a lot more than a series of “business transactions.” I don’t take any of this for granted – it still feels quite wonderful, after all these years – but the phenomenon has become familiar to me.

More surprising are first-time visitors who come bearing gifts of appreciation. Why would they? Well, sometimes there is a chain of connections linking my bookstore to strangers coming through the door. That’s what happened last week when Tom Corbett and his wife, Beverly, from Ann Arbor came in with big smiles.

It was a mention of Jim Harrison books in an area magazine that brought the Corbetts to my bookstore in Northport. A poet friend of theirs had known Harrison in Lake Leelanau. I asked their friend’s name and didn’t recognize it, but Tom explained that he, Tom, and his friend, Red Shuttleworth, had both received Western Heritage awards for their work.

“How long did you know Jim Harrison?” one of them asked, and my mind reached back to my first meeting with Jim and Linda. David, wanting to introduce me to them, had taken me over to their old French Road farmhouse (the house’s future remodeling not even a plan back then) when I was up from Kalamazoo on vacation. I remember it as late enough in the summer evening –it would have been August – that the porch light was on. We stumbled in on an unusual scene in the Harrison house, where few dared to stop by without calling first: a traveling poet had come on pilgrimage to meet Jim, accompanied by his wife, their baby, and a very large dog. I described the scene to the Corbetts. “It was an Irish wolfhound,” I recalled. “I’d never seen such a tall dog in my life, and I’ve never forgotten it.”

The faces of my new acquaintance lit up, and they exclaimed excitedly, “That was him! That’s Red Shuttleworth! He’s always has Irish wolfhounds!”

They wanted to show me a picture of Red, but I shook my head and said I had no memory of what the man looked like. I only remembered the dog.

“I think he was teaching high school English,” I offered, and they nodded. Yes, Red had taught English in high school and community college for years.

What were the odds? The Corbetts had never met Jim Harrison themselves, and I had met Red Shuttleworth only once and remembered only his dog, but because of the dog I remembered the incident, and that connected the Tom and Beverly and me. We were all delighted.

“So you’re a poet, too?” I said to Tom, recalling what he’d said about a book award. No, he was a physician, but he and Beverly had lived for a while on a reservation in New Mexico, and Tom had collaborated on a project that extended over many years with Native American photographer Lee Marmon to produce their prize-winning book, Laguna Pueblo: A Photographic History. 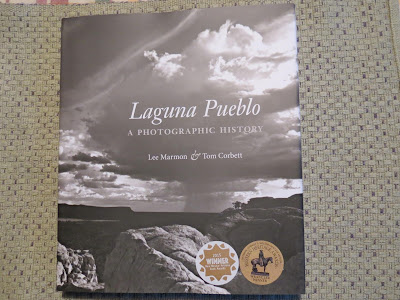 Tom went out to their car and returned with a copy of the beautiful book and inscribed a copy to me. Could I buy it? No, it was a gift. I was overwhelmed. 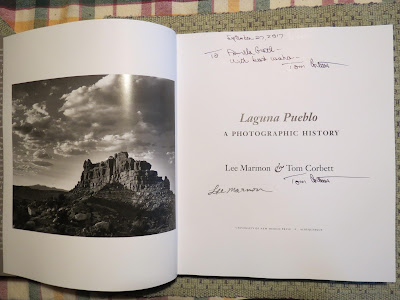 That meeting was over a week ago, and now I have finished reading the text of Marmon and Corbett’s book and have gazed long and carefully at the photographs, and it’s plain to see why the book received a Western Heritage Award. Besides the photographer's stunning images taken over several decades, there are also historical and family photographs, stories taken from written archival records, and recorded oral histories, all documenting life at Laguna Pueblo and how it has changed over the years but also held onto many important traditional ways.

An additional bonus from my meeting with Tom and Beverly was learning about Lee Marmon’s daughter, Leslie Marmon Silko. Sherman Alexie says of her best-known work:

Ceremony is the greatest novel in Native American literature. It is one of the greatest novels of any time and place. I have read this book so many times that I probably have it memorized. I teach it and I learn from it and I am continually in awe of its power, beauty, rage, vision, and violence.

I’m excited about reading the work of this writer and searching out additional Native American voices in our country’s literature. 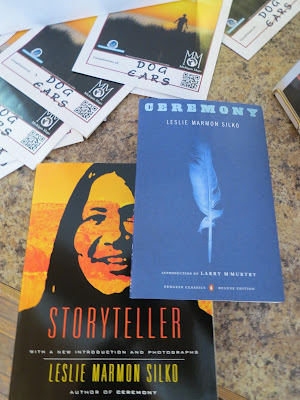 All these connections, of course, came about by way of years spent in Leelanau County, besides getting to know people through my bookstore. And really, it was Jim who was the catalyst in bringing the rest of us together now, in 2017, reminding me once again that community is more than people living at the same time in the same place. It is many ties that link us over time and across space, sometimes over great distances and in surprising ways.
Posted by P. J. Grath at 8:56 AM

What a great story!

Red Shuttleworth has produced photo documentation on Facebook dating our meeting at the Harrisons' house to 1976. Forty-one years ago? Is that really possible???

Pamela, I am one of so very many who appreciates your bookstore and all that you add to our village! Could you order me a copy of Ceremony?

Thank you, Ty! You have a pretty huge fan club yourself, I hope you know! More copies of CEREMONY coming soon -- maybe tomorrow? I'll be happy to set one aside for you.