Scent of Apples, Lead Me On and Carry Me Back 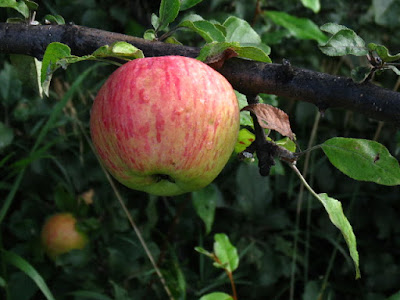 But when nothing subsists of an old past, after the death of people, after the destruction of things, alone, frailer but more enduring, more immaterial, more persistent, more faithful, smell and taste still remain for a long time, like souls, remembering, waiting, hoping, upon the ruins of all the rest, bearing without giving way, on their almost impalpable droplet, the immense edifice of memory.

This, friends, is why one reads Proust! He penetrated so deeply into the passing moments of his life that he fixed them, for us, and for all literate time. When other books disappoint, when sleeplessness comes in the dark of the night (as it did to the narrator of Remembrance of Things Past), one can pick up any volume of Proust, open to any page, and be calmed and made happy. It is even possible to close wakeful eyes (without turning on a light to read) and rehearse in one’s mind the beginning of a lengthy section of the story – the differences between the boy’s bedroom in Combray and his hotel room in Balbec, the ways in which his expectations of Balbec fell short of its complicated reality, his imagination’s pictures of places not yet visited and the magic of their place names....

And so I put aside Daniel Defoe one night in favor of Proust, and the next day another magical book came my way, Wallace Stegner’s unclassifiable Wolf Willow. Almost immediately, reading the introduction by Page Stegner, my Proustian literary antennae began quivering.

It is the history of a small town called Eastend (renamed Whitemud in the narrative), where Wallace Stegner spent the most formative years of his childhood. And it is also, by synecdoche, the chronicle of a process of white settlement on the northern plains, a process that reaches its climax and end in this particular short-grass subdivision of southwestern Canada.

But Wolf Willow is utterly atypical of conventional history. What we have here is history filtered through the evocative and judgmental mind (and memory) of the region’s most illustrative native son; Stegner’s response to his subject is a kind of stratified formation of anthropology, sociology, geography, geology, and ecology applied to a literal place—and to literal place as a state of mind.

Yes! This, I think, is the book that will, finally, lead me into the work of Wallace Stegner, a writer whose novels have previously resisted my attempted incursions. The first sentence of the first chapter is everything I want it to be:

An ordinary road map of the United States, one that for courtesy’s sake includes the first hundred miles on the Canadian side of the Line, will show two roads, graded but not paved, reaching up into western Saskatchewan to link U.S. 2 with Canadian 1, the Trans-Canada Highway.

Road map! Unpaved roads! U.S. 2 and the Trans-Canadian Highway! (Place names!) With Stegner's words and lines my imagination flies northwest-west from the northern lower peninsula of Michigan, past the Dakota of my birth, and up to the northern borderland. With the author, I explore and remember the place where he grew up, hearing as a child about “the Cypress Hills,” thinking it somewhere nearby by and not realizing that he lived in the region so named. The town he finds has changed dramatically. Once “bare as a picked bone,” it is now full of trees. The change is charming, but he cannot find in the landscape his own and his family’s past until, coming down to the river itself, where today’s children are playing, he is assailed by a familiar smell, “pungent and pervasive” but at first eluding identification. He investigates further, inhaling the odor of the old bathhouse shack, sniffing a handful of mud. Finally...

I stand [on the bridge] above the water and sniff. On the other side I strip leaves of wild rose and dogwood. Nothing doing. And yet all around me is that odor that I have not smelled since I was eleven, but have never forgotten—have dreamed, more than once. Then I pull myself up the bank by a gray-leaved bush, and I have it. The tantalizing and ambiguous and wholly native smell is no more than the shrub we called wolf willow, now blooming with small yellow flowers.

This smell, Stegner writes, is as evocative as Proust’s madeleine and tea.

For the moment, reality is made exactly equivalent with memory, and a hunger is satisfied. The sensuous little savage that I once was is still intact inside me. 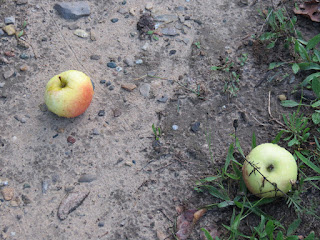 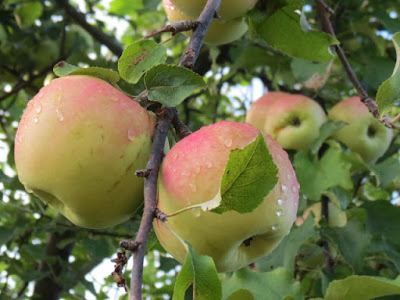 Is September more redolent of memory-evoking aromas than other months in the Midwest? Sun-kissed apples on trees or in the grass, warm to the touch, or rain-wet apples glistening on branches or bowls of apples on the porch on a rainy day, filling the dense, humid air with their perfume -- apples and sunshine or apples and rain – either conjunction holds volumes, and those volumes open to a succession of years. 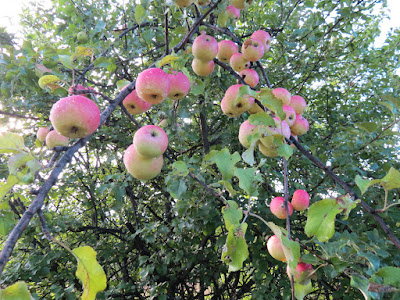 The apple tree in my parents’ backyard was an entire universe. That world’s year began for me in spring when the tree burst into generous bloom, its delicate white petals tinged with fugitive pink, bouquet upon bouquet, fragile flowers inviting bees with rich yellow pollen and heavenly scent. During that season I imagined the tree my tropical island, where the staff of life was blossoms in place of bread.

In summer I often retreated high into the tree’s leafy branches with a book, hidden from the busy world of family below and in the house. How seldom human beings look up! They could have seen me much oftener than they did, but I was happy to be invisible, enjoying that childhood fantasy. Sometimes, though, a friend would be invited to join me, and when the playmate was Jimmy the tree became what we called back then a “rocket ship.” We broke off twigs to leave sharp, raw ends and impaled on those points small, hard, green apples to be the control knobs of our ship. We would “blast off” over and over again, leaving earth far behind. Did the earthbound, pedestrian world have any idea what was happening above their heads? 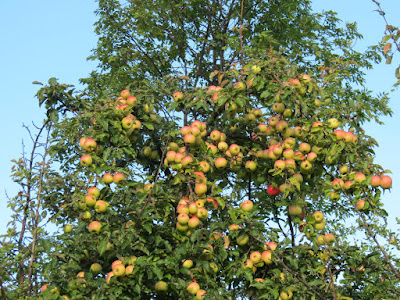 We knew nothing of apple varieties in our family. Fruits of the backyard tree we called “pie apples,” to distinguish them from the “applesauce apples” of the trees in the side yard (the second lot that was also home to a pear tree and raspberry patch). One thing all three apple trees had in common was that the fruit would fall faster than we could usefully gather it up. Good apples went immediately into pies and sauce and, for longer-term storage, into bushel baskets to be stored in the basement “cold room.” (The “cold room” was in the back of the house; frontmost in the basement was the “coal room” with an iron door opening to the driveway for delivery of coal. Learning to distinguish the two names sounding so much alike felt like a giant step forward to my three-year-old self.) But punky, mushy brown, wormy apples had to be picked up, too. They could not be left in the grass to rot. We two little girls, my sister and I (the baby sister still too young for the job), had no objection to the firm, crisp apples (white-fleshed and tart when bitten into), but the others were repulsive to the touch, and my father had to bribe us with coins if he wanted the job done well. 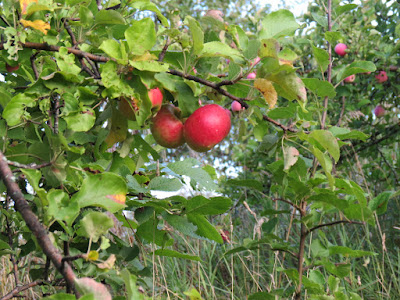 One year when I was six and Deborah three and our baby sister newborn in July, Deborah and I were taken to spend a month with our grandparents outside Springfield, Ohio. Their backyard was orchard but no monoculture: there were apple trees of different varieties, different kinds of plums, peaches, pears, and a grape arbor heavy with fruit over the brick-lined walk from house to outhouse. Here, too, the branches of the apple trees were my private world. One August afternoon as a storm approached I clung near-frenzied to the branches of an apple trees that swayed wildly in the wind until compelled by my grandmother to come down and into the house. (I saw myself as a wild thing of Nature; she saw me as a little child.) The storm arrived and raged. In the aftermath, my grandparents’ transformed orchard was a shocking sight. Fruit littered the ground like hailstones, and it was impossible to take a single barefoot step without treading on bruised and shattered apples, peaches, plums, or grapes. Fruit cultivated lovingly for winter use, as well as for sale, had been laid waste in less than an hour. Nature might not be cruel, but she was definitely unconcerned with human plans. 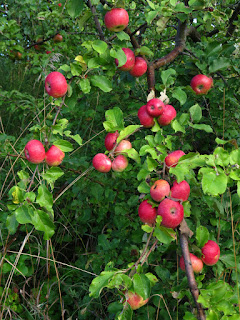 My adult Septembers continue to be rich in apples. Old orchards in Alger County in the Upper Peninsula, planted to supply lumberjack camps, survive as remnants of those old days, producing apples year after year. Along town streets, washboard roads, and two-tracks, branches hang heavy, trees drop riches to the ground, and the air is filled with apple perfume and wasp flight. Every year I look out again for one particular tree in Grand Marais and remember a long-ago yard sale and the old man who encouraged me to gather up as many of his sweet, yellow-skinned apples as I could carry away.

Then there was the autumn I picked for John and Phyllis Kilcherman. Paid by the box, it was as much as I could do, picking as fast as ever my hands could fly, to fill a single box in two hours. What was the pay per box? That I honestly don’t remember. What I remember is the scent of apples all around, in every kind of weather, cold rain on wet days running down the back of my neck, hands turning numb when the fall weather turned cold, and distant voices from crews in other parts of the orchard, drifting on the wind to where I worked my solitary assignment.

Did my sisters and I offer apples to our teachers when back-to-school time came around? I suppose, perhaps. But the scent of apples does not carry me back to school, I’m happy to say. It takes me outdoors instead, along dusty roads, and up into the trees themselves, branches swaying in the wind.

Comfort me with apples! Bring back to life that "sensuous little savage"! 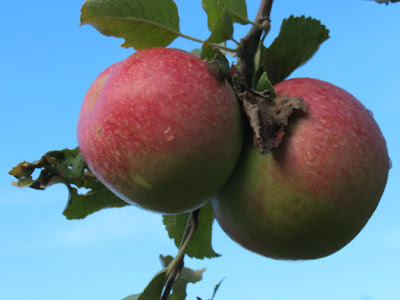