In Which We Explore the Other Side


Other Side, yes, but not at all the Dark Side. Hardly that! Our annual U.P. getaway, lovely as it was in so many ways, had been just too short after a summer of retail captivity, and while I was hungry for more time out in the world, David had been thinking about the area where his grandfather had farmed and where his grandparents are buried. We had not made an expedition over to the Michigan’s Lake Huron shore, the “Sunrise Side,” for about fifteen years, and it’s not much over 200 miles from Traverse City, easily close enough to make the trip with a single overnight.

And so we started out on a Monday morning. 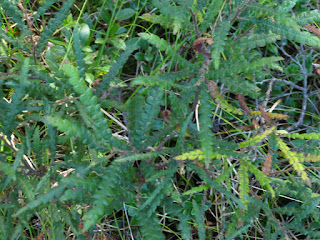 When we drive up to the U.P., we take either 31 or 131, so neither of us had been east of Kalkaska for a long time. On the west edge of Luzerne, stopping to let Sarah have a run and do a little exploring of her own, I found the first discovery of the day’s explorations, a mysterious and fragrant green plant co-existing with patches of wild blueberries and lichen. This is what sweet fern looks like. Its fragrance, however, is the real excitement, and I was holding and smelling it for the first time in my life. Unbelievable!

The next surprise was no farther down the road than Mio. 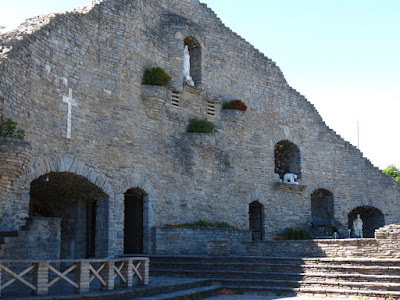 You don’t have to be Catholic to explore and be impressed by the Our Lady of the Woods Shrine (“a Pilgrimage with Mary”). The inspiration for the shrine came to a young priest in 1945, and work was begun in 1953, “without a penny to spend and two borrowed shovels,” says the free brochure. My first question on seeing the very large and complex structure had been how a little parish in Mio, Michigan, had ever raised the money for such an ambitious construction. The brochure’s answer:

Much of the work was done by hand with the aid of a huge scaffold, a homemade elevator, shovels and wheelbarrows. It is estimated that 25,000 tons of native Onaway stone and an equal amount of cement were used to construct the shrine. The Shrine rests on footings that are 8 feet deep and 4 feet wide. The finished product is filled with spiritual and natural symbolism of Michigan. 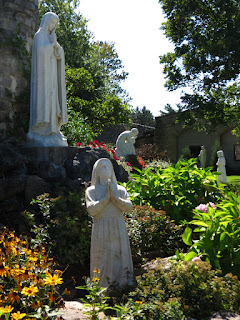 Indeed, Mary has a lot of company. We approached the Shrine from the back, pulled off the road by the sight of it, and so we came around to the front by the right wing, that part dedicated to Michigan – the Upper Peninsula, Tahquamenon Falls, Father Jacques Marquette, and the deer of the Lower Peninsula. Have you ever heard of St. Hubert? He is the patron saint of hunters. My artist husband appreciated the wildlife sculpture as much if not more than the statue of the saint. 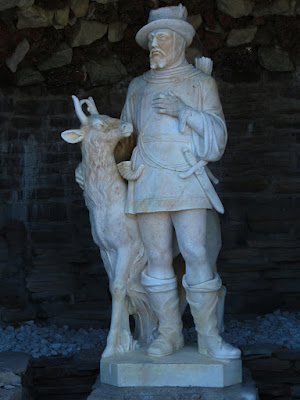 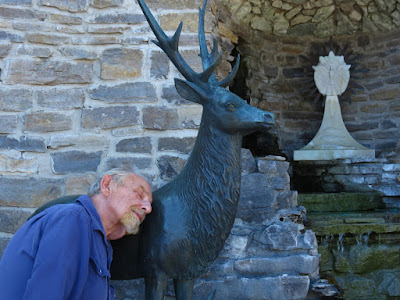 Built into the towering, curving stone wall are many niches and grottoes, and more statues stand in the gardens, as well. There is Our Lady of Guadalupe from Mexico, Our Lady of Fatima from Portugal, from France Our Lady of LaSalette and of Lourdes, and Our Lady of Mt. Carmel from England. I was especially charmed by the colorful Our Lady of Czestochowa, an image that owns a most colorful history, which I quote here only in part:

In the 14th century, the painting was sent to Poland in response to a dream had by Prince Ladislaus of Opola. An attack by the Tartars prompted the Prince to flee with the painting. He stopped in the town of Czestochowa. The painting was installed in a monastery and church there that the prince built for its protection. The monastery was overrun by the Hussites in 1430, but they were unable to remove the painting.

In 1655, Poland was overrun, leaving only the area around the monastery remained unconquered [sic]. After those remarkable events, Our Lady of Czestochowa became the symbol of the Polish National Unity and was crowned the Queen of Poland. 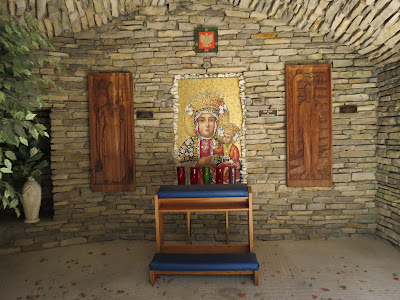 Russian troops in 1920, we are told, withdrew when they saw an image of the Virgin Mary in the clouds. 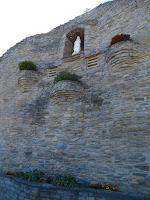 The Shrine is worth traveling to see. It is beautiful, both in itself and in the work and faith it represents. On October 9 a Year of Mercy Mass with Bishop Raica will be held at 11 a.m., outdoors, weather permitting. In case of inclement weather, the mass will be celebrated in adjacent St. Mary’s church. 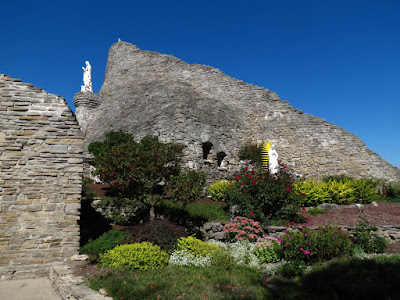 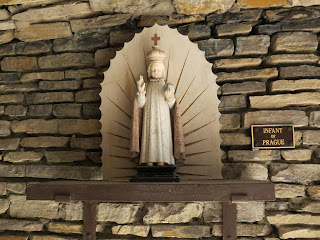 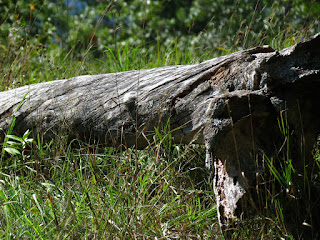 David and I cannot claim to have discovered the Au Sable River, but we did manage on this trip to find many beautiful little county roads, giving onto even smaller access roads that allowed us appreciate the river from uncrowded, tucked-away vantage points. “This is great!” David exclaimed joyously. “I don’t have any idea where I am!” To which I responded with matching happiness, “I’m not even looking at the map any more!” 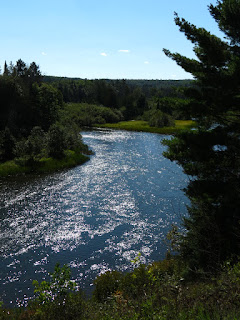 On one tiny dirt trail when we had to pull over to let a vehicle pass in the opposite direction, David and the other driver stopped to exchange a few brief, friendly words. In parting, David said, as he often does to gallery visitors in Northport, “Enjoy the day!” and the other fellow replied, “Keep ‘er watered down!” 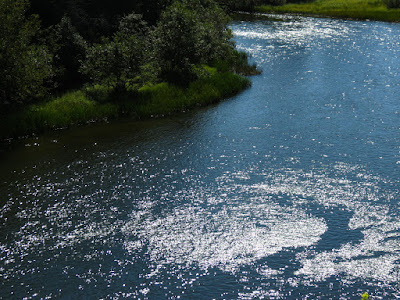 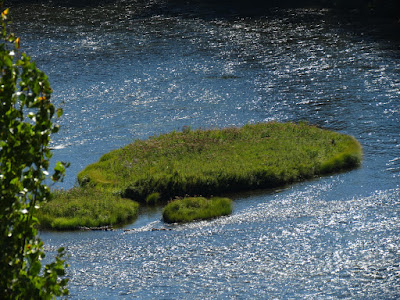 The little crossroads of McKinley was almost nothing but wonderful old log cabins. Log and stone – the vernacular architecture of northern Michigan. Not a starter chateau in sight! 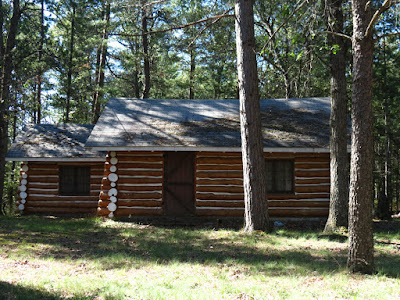 Much of what we traveled over to Tawas to see would not be interesting to other people – a house and barn here, there an empty country corner filled with goldenrod where the primary family farm once stood, a peaceful country cemetery, and the framed photograph of a now-deceased old-timer, one of David’s shirttail cousins, in the restaurant where we ran into the cousin in person fifteen years before. That was the personal part of our pilgrimage, a kind of family time travel. 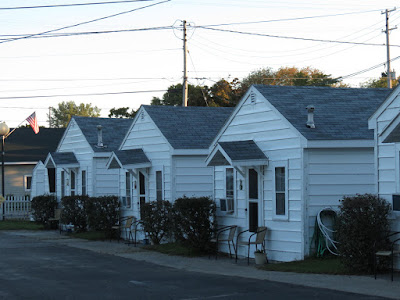 But we also experienced time travel of a different kind in the sweetly unspoiled nature of the Lake Huron shoreline. Do you remember Traverse City’s East Bay in the middle of the 20th century? The little mom-and-pop motels and tourist cabins ringing the beaches? That is Lake Huron still today, from Tawas north to Alpena. The place we stayed had modern siding, but the line of little cabins looked like Monopoly houses (only white instead of green), and inside the knotty pine walls had that rich patina only time can bestow. 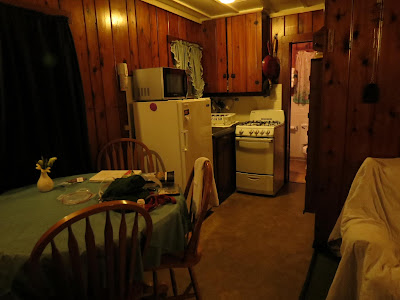 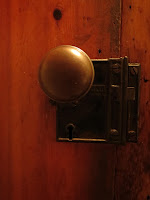 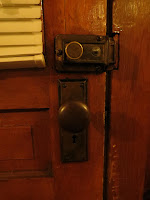 Door hardware and wall decor were many decades old, as well. The floor had a few perceptible slopes and dips, but that is all part of the charm of time travel.

I did not realize until morning that our road had curved around the shore as far as it had to reach East Tawas, and so the sun rose up the shoreline, rather than straight out across Lake Huron where I had expected it. 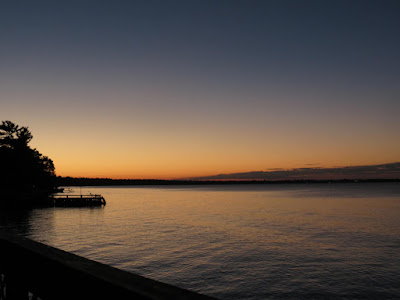 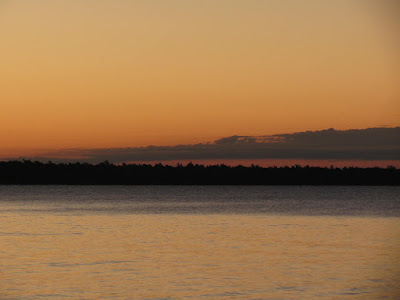 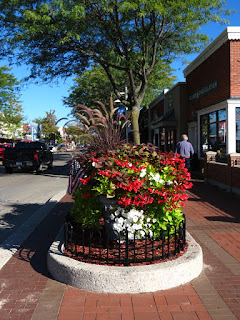 Downtown Tawas is lovely. It's also full of little surprises if you look more closely. 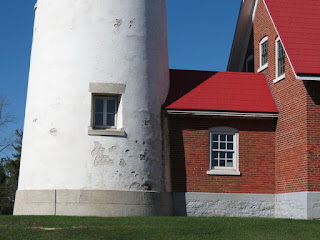 
We used to travel over to Alpena every spring when end-of-winter cabin fever got too fierce, and in those old days our destination was a marvelous old used bookstore and antique shop that reliably yielded up treasures. The bookseller has been up in Calumet for years now, but Alpena’s lovely old buildings are still there, and the town has a more prosperous atmosphere than we remembered from years ago. For instance, we had lunch in a hip little bar/restaurant that would have been unimaginable in Alpena’s old days. The front opened to the street, and there were tables out on the sidewalk. How Parisian! 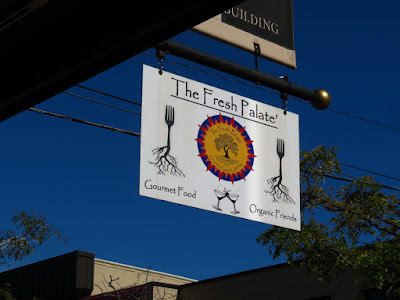 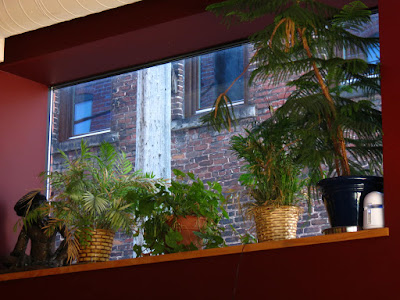 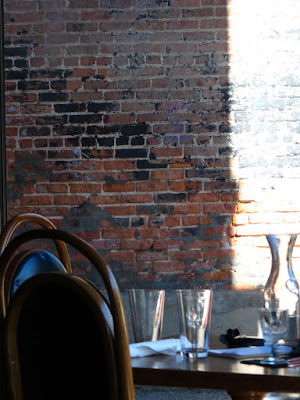 All in all, we felt we had been away from home much longer than two days. We had seen so much! We saw old sights and new sights ... old places we’d seen before but didn’t remember ... things we thought were new that probably weren’t ... new places that will be new to us again the next time. All that was and will be fine. What I do hope is that the modest, unpretentious, friendly and welcoming atmosphere of the Sunrise Coast won’t change too, too much by the time we see it again. Maybe we shouldn’t wait too long? We definitely need to plan for a longer stay the next time. 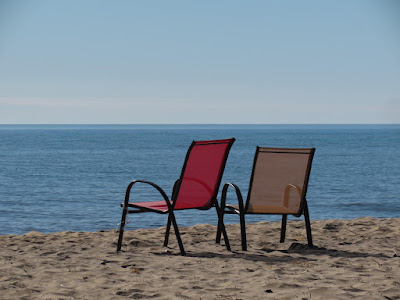 Michigan! How fortunate we are to live in such a varied and beautiful state!

What a wonderful post this is Pamela! I loved reading and re-reading it and the accompanying photos make your trip all the more delightful to imagine.

Deborah, if you look at the latest post on my photo blog (http://shotinlight.blogspot.com/2016/09/where-did-we-go-this-time.html),
you'll see a few "mystery" photos that hinted at this trip. I'm glad you liked it!

Yes, wonderful post. I've never been to that part of the state, makes me want to plan a trip there myself!

If you and Carson want to make a sister trip sometime, your dad and I will give you directions to some of the old family sites.

Lovely! I'm glad you got away again. Yes, the sunrise side of the state is worth exploring!