When I first met David, he was engaged in building a houseboat. We were both enamored of Wind in the Willows, so I was happy to join in, painting iron window trim while he nailed on shingles. Once launched, the houseboat was his Leland summer home and our shared vacation cottage for many years, just upstream from the Riverside Inn before you get to Stander’s Marina. Don't look for it now, though, because it is no longer there. Time, like the river, moves on.

“I beg your pardon,” said the Mole, pulling himself together with an effort. You must think me very rude; but all this is so new to me. So – this – is – a – River!”

“The River,” corrected the Rat.

-      Kenneth Grahame, The Wind in the Willows

The introduction to at least one edition of WITW suggests that the book is a test of character one reader gives to another potential reader, but if we hadn’t both already known and loved the book, I’m sure whoever introduced the other to it would not have been disappointed by the response.

Not long into our own all-absorbing romance, we found a copy (the first of many purchased over the years) of Harlan Hubbard’s Shantyboat at the Bicentennial Bookshop in Kalamazoo. We thrilled while reading aloud to each other from its pages, identifying with Harlan and Anna’s middle-aged love affair, their love of the Ohio River, and their determination to take to the houseboating life.

...[The town of Brent] had long been familiar ground to us. We had kept a canoe there, and spent many days on the river. Yet when we came to live on the river ourselves, a change took place in our relation to Brent and the people who lived there. ...At the time, we did not grasp the meaning of all this, but it was the beginning of a deep and permanent alteration in us. The river would leave its mark.

In those days, when we lived in Kalamazoo, our own river of choice was a smaller stream, the seldom-frequented (by others), easily overlooked Paw Paw River in Van Buren County.

Sometimes we’d have that whole river to ourselves for the longest time. Yonder was the bank and the islands, across the water, and maybe a spark – and sometimes on the water you could see a spark or two – on a raft or a scow, you know, and maybe you could hear a fiddle or a song coming over from one of them crafts. It’s lovely to live on a river.

We did not have the Paw Paw to ourselves “sometimes” but every time we ventured upon another wild stretch, twisting and turning and winding through woodland and wetland, with numerous deadfalls impeding our way. Again and again we would climb out of canoe, or inflatable rubber boat, or the ugly old $5 styrofoam boat snapped up at a flea market (easy to cram into the back of the car and nothing that required careful handling, that indestructible little craft took us on the river oftener than any other) and clamber over fallen branches or entire trees blocking our downstream way, dragging the boat over the obstacle after us. It was worth the effort to have a river adventure all to ourselves. Ourselves and huge turtles, stalking blue herons, watchful kingfishers, butterflies, banks tumbling with wild roses, boggy places filled with prehistoric ferns, and certain deep, sandy pools perfect for a refreshing skinny-dip.

A recent overnight trip away from home took us along the Au Sable River, its tempting bends and islands and rippling waters glinting in the sunlight making me long to be on rather than above those currents.

She loaded up The River Rose, tossed in an army sleeping bag, two life vests, a vinyl tarp, a gallon jug of water, and her daddy's best fishing pole. She climbed in, fixed her oars, and pushed off.


Recently our reading circle convened to discuss Huckleberry Finn. Different readers had very different favorite sections and aspects of the book, but for my part, in the early chapters, I was impatient for Huck and Jim to take to the river, and later, after they left the river, I was impatient with subsequent chapters. I am also, I confess, impatient with the idea that this is a book only for boys (and men). Such a claim makes me eager to re-read one of my favorite Michigan novels of the twenty-first century.

The Stark River flowed around the oxbow at Murrayville the way blood flowed through Margo Crane’s heart. She rowed upstream to see wood ducks, canvasbacks, and ospreys and to search for tiger salamanders in the ferns. She drifted downstream to find painted turtles sunning on fallen trees and to count the herons in the heronry beside the Murrayville cemetery. She tied up her boat and followed shallow feeder streams to collect crayfish, watercress, and tiny wild strawberries. Her feet were toughened against sharp stones and broken glass. When Margo swam, she swallowed minnows alive and felt the Stark River move inside her.

Campbell's fictional Stark River carries me back to those happy days on the Paw Paw, as did my favorite parts of Huckleberry Finn. Open oceans, even the wide-open waters of the Great Lakes, take a different kind of sensibility, different skills, as well as very different kinds of boats. One is intimate with the water of a river, no matter the river’s size, and there is life to be seen along its banks. Not to mention the intimacy of two people together on a river....

Margo saw no evidence of rats, but she knew that wherever there were people, there were rats, especially on the river. Nobody wanted the skins or meat, but Margo did not despise them the way everybody else seemed to. Rats were just creatures getting by on the river as best they could.

Sea dogs and river rats – two different breeds. It is important to recognize one’s own kind, and that much about myself, at least, I do know. 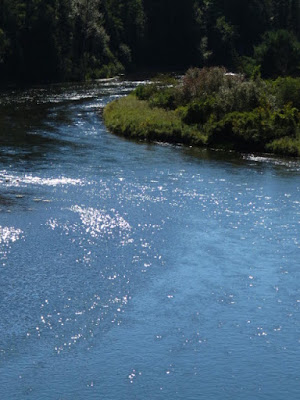 I can never figure out which kind of water critter I am. I know only that I am one. A freshwater sort. It was nice to read this post and think of you out on the river in recycled styrofoam, adaptable as always.

I really love and respond to this river blog. I am sending to my daughter Brita who has a love affair with a boat and the open seas.

My mom and dad began their romance on 5he Huron River. I understand.

I thank all of you for not only visiting and reading but also leaving responses for me. Dawn, I recall some of your posts along the river, remembering your parents (lovely!), though I guess it's fairer to say that David and I began our romance over coffee and books. Also cigarettes, which we both dropped, finally, along the way.

I Love the feelings and memories this blog awakens in me, of days when hearts were young and adventure was a part of the life and love we shared; Canoeing the Au Sable river and the lakes and marshes of Algonquin Park in Ontario, and dream we had of Quetico Provincial Park which never did materialize as we eventually became avid stewards of the Land in later years. But small adventures like the Crystal River and the Platte kept those other adventures alive for us; As the life of the Harlen Hubbards must have given Wendell Berry the Kentucky and Ohio rivers connection to his own agrarian life.
Water was the dream that brought us to Northport in 1948, and made Leelanau our eventual goal.
Thanks Pamela, for your wonderful stories.
Julia