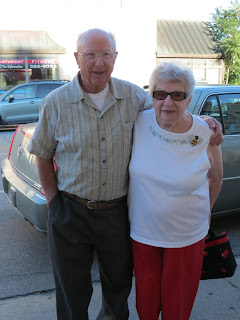 Phyllis and Johnny Kilcherman arrived in state on Waukazoo Street for their Saturday evening book launch, and everything went smoothly from then on. John brought the apples, I made punch and put out cookies, and a sizable crowd quickly assembled. More than one person came early, so as to be able to make the 8 o'clock Sousa concert at the Northport auditorium up the hill (proving my contention that the conflict could be easily overcome). 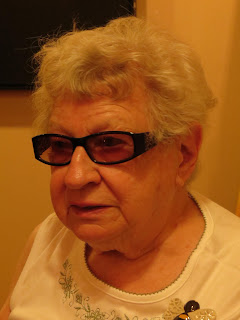 Phyllis Kilcherman's chief focus in the book and in her remarks to the assembled audience was the family farm angle and the recipes. "Family farms are disappearing," she said, explaining why she wanted to document the various families who had lived and worked the land now known as Christmas Cove Farm. 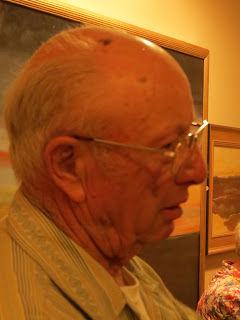 John Kilcherman had stories of playing softball in an old orchard when he was a boy. "Everyone had to hit into left field," he said, "because we didn't have enough players for right field." He told how he first got interested in old apple varieties and started planting one or a few of each at a time, but only on marginal land and along fence rows, as he didn't want apple trees to take up valuable growing space.

It was 1975 when the Kilchermans first started growing apples, "and we had so much fun," Phyllis said, "that we wanted to share them with friends." They began to put together gift boxes. And the rest, as they say, is history. 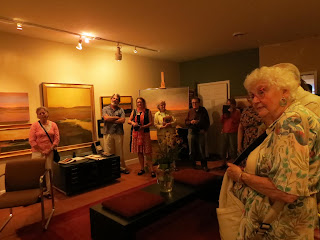 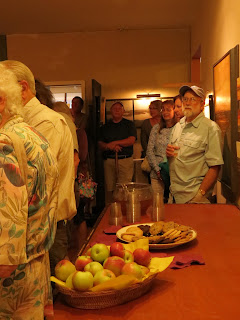 Other honored guests of the evening, pictured below with John and Phyllis, were Dianne Carroll Burdick, photographer, and Susan Bays, publisher (Arbutus Press). 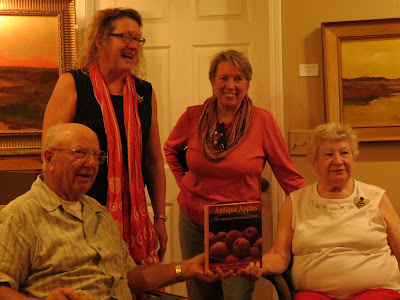 Those who have visited Christmas Cove Farm know that John Kilcherman has an enormous collection of antique bottles, but they may not know he also has quite a collection of old books, featuring (not surprisingly) many books on farming and fruit growing. So it is a serious compliment to the photographer when John says he thinks her photographs of apple varieties are some of the best he's ever seen. All apples were photographed in the orchard, on the tree, in natural light, and the results are spectacular.

All in all, it was an evening of celebration, a dream come true for Phyllis Kilcherman, and the response from the gathered Northport crowd was heartwarming. What a satisfying way to wind up the season's author events at Dog Ears Books! 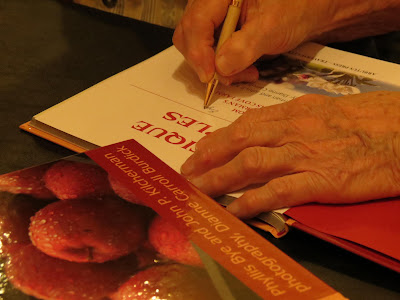 So glad it went well! Love that last photo of the book signing. Very happy her dream came true, wish I could have been there!

It would have been lovely to have you here, Dawn. Thanks for your good wishes, anyway! Or, as John Kilcherman would say, ennaway!

So wish I could have been there... save a book for me, Pamela!