The Day We Let Ourselves Go


“Leelanau UnCaged” was the theme of the recent street fair in Northport. After the event, I received an e-mail from an East Leland woman who said she and friends were curious about the connection between Northport and composer John Cage. It was so tempting to make up a story, all about how John Cage had once visited Northport – incognito, of course – and how the fair was named in his honor in memory of that visit, etc., etc. But while it is certainly possible that Cage came to Northport incognito, there is no evidence pointing in that direction. (Scotch the rumor!) As far as I know, the only connection between our village and Cage prior to Saturday, September 28, was in the brain of Andy Thomas, shown here at the wheel of one of his big Thomas & Milliken trucks, the one that opened up, all along the side, to become a sound stage for live music! That Andy! He and his wife, Gloria, are hard-working folks who are also full of ideas and energy and enthusiasm. Hence “Leelanau UnCaged.”
Major downtown streets were closed and traffic rerouted from 10 a.m. to 10 p.m. The route of the Homecoming parade had to take a major detour, but everyone agreed, post-event, that the change had been a good one. Northport’s Homecoming parade is usually a pretty small event, with only a few family members and locals watching the fire engines and floats go by, but this year, with so many people in town, the parade audience was the biggest ever.

There was art all over the place, indoors and out --

At Dog Ears Books, Fleda Brown came to give her first poetry reading in a year, and from his vantage point behind the counter, David was able to report to me later that I was not the only listener who had to brush away tears. Despite the title of Brown’s new collection, however, No Need of Sympathy, the poems are not about cancer or chemo but were written before the poet underwent that siege. It is poetry that has no need of sympathy. More about poetry, including that of Fleda brown, soon in another post.

Following Fleda's reading, we had another Michigan writer, Omena resident Ken Wylie, signing his recently released co-authored novel, Possessed. Ken's big smile here is because we sold out of all copies on hand. (We have restocked since then, and Ken has signed the newly arrived copies.)

From around the corner came the sound of drumming, and that made me happy. I’d missed pow-wow this last August, and here pow-wow had come to me – well, to Northport. At least some of it. Here are some dancers and drummers on break.

Next, back on Waukazoo Street next, there was a woodwind quintet playing in front of Dog Ears Books. That was a rare treat and pulled in good crowds, too.

Then it was time for the crowds to surge through the building housing the bookstore to the temporary performance space cleared in the back. Crystal Bindi studios in Traverse City had come to demonstrate Middle Eastern belly-dancing. Another Northport first?

Music continued out on Nagonaba Street, where the community band formed up just east of the wood-fired pizza oven. 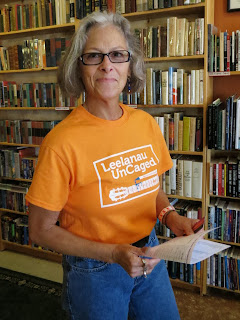 Music continued after sunset, as a few of us tired veterans gathered over pizza and beer to exchange stories. All agreed to call the day a resounding success.

We were certainly fortunate in the weather (rain the week before, rain the week after, and perfectly clear skies for our Saturday), but mountains of credit must go to the instigators, the planners and organizers, the participants, and the crew of volunteers who made everything run smoothly and kept the fun quotient high. 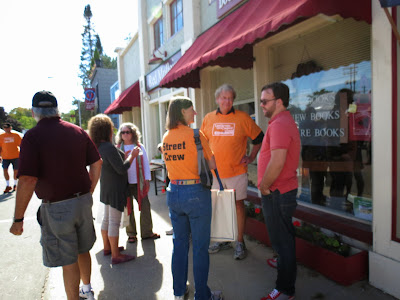 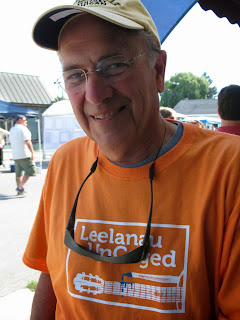 As you can see, I didn't get far from my bookstore on the day of the street fair. I know there were a lot of vendors, along with that music sound stage, set up over on Mill Street. Also, I didn't get any pictures of dynamo Clare Gengarelly. She and her Northport Arts Association -- sorry I don't know all their names! -- put themselves into this event heart and soul, and it showed.

Looks absolutely fabulous! Definitely something to become a tradition. Wow. Lots of art and music and community...gotta love it!