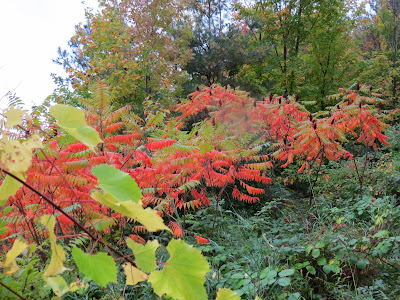 [WARNING: Not a feel-good post, though I did come back to add the sumac photo above. Sigh!]

I’m trying to remain upbeat in public, but sorrow and frustration fill my heart. We were expecting sad news from friends on Monday so were relieved to get good news for and from other friends to balance the day, but before bedtime the good news turned bad, too. I got to sleep but woke before 4 a.m., wide-awake and too upset to read myself back to sleep or meditate away the blues by drawing. Long-neglected bookkeeping benefited from the pent-up energy that needed somewhere to go, and paying bills and posting expenses occupied my mind for a while, pushing trouble to a rear burner. But when the paperwork was done, trouble leapt back again to the foreground, and even drawing paper and pencil could not banish the dark clouds.

One friend was dying (I learned a couple of hours later that she had in fact died about the time I was waking in the dark), and the other friends had suffered yet another severe disappointment in their search for a year-round home. Feeling helpless, I couldn’t get either couple out of my mind.

Losing a friend to cancer isn’t easy. Her husband said she did not want friends to mourn her passing, to remember instead the good times we shared, but I am doing both. I’m not “Zen” enough that I can accept a friend’s dying without a tear – and anyway, if we hadn’t had good times together, there would be nothing to grieve. I miss her already. Maybe some of my friends are, as people say, more “philosophical.” (My philosophy is that grieving and gratitude are perfectly compatible.) Another friend notes that “grief is the price of love.” Indeed!

So there was that. With such a death, though, there’s no one to blame. Hers was a very rare form of leukemia. Fewer than 50 cases have been diagnosed and studied worldwide. It’s pernicious, and it’s fast. The first round of chemo gave her a reprieve, and her family and friends were able to enjoy a few months of high-quality togetherness, our friend able to spend time outdoors in nature nearly every day, living the end of her life just as she wanted to live it. Given the circumstances and constraints, everyone did very well with the limited time available.

The other situation is, in some ways (although it is still reversible, as death is not, I realize), more difficult to accept than death, in that it came about initially through a terrible set-up (evident only in retrospect) and betrayal, and the friends suffering from that initial blow have been knocked down repeatedly since. They have lost their business, and along with it their home, and every time they get their hopes up that they’ve found a new place to live, those hopes are dashed. They are decent, responsible, hard-working people, and they just can’t catch a break.

Leelanau County is sometimes called, even by people who live here, “La-La Land.” It’s beautiful, it’s a tourist and second-home and retirement Mecca, and, increasingly, owners of multiple properties do not want to be “bothered” with a year-round rental (one man actually said that to our friends, dismissing his neighbors’ plight with “I just don’t want to be bothered”) when it’s so much more remunerative to operate a seasonal rental. Some owners of seasonal rental property don’t want to rent it out at all in the winter; others will rent it reasonably until spring, but “You’d have to be out by May first.” And go where? There is nothing to rent in the summer that isn’t priced for the vacation/resort market.

And it’s a growing trend: people retire here, bring their pensions and portfolios, buy anything on the local housing market that’s reasonably priced, put some money into it to cutes it up, and operate it as a seasonal vacation rental. What it means is that fewer people, the ones with more money, own more pieces of property, and that the year-round rental housing market is vanishing utterly.

Once I went, on a graduate fellowship, to a weekend conference at the Aspen Institute. I remember looking at prices of property in the little town of Aspen, Colorado, and thinking that anything available there was like a Leelanau County price times ten. There were jobs in that little town full of movie star residents, but the waitresses and bartenders and baristas and carpenters and landscape crews couldn’t afford to live anywhere near the town. Many Colorado towns fit that description, and now the situation is being replicated in northern Michigan.

It didn’t used to be like this here. It used to be that there were people of all income levels, and they mixed socially, and there was room for everyone. To me, it was, along with natural beauty, one of the most attractive features of Up North life. There’s a lot more talk about “community” now than there used to be back then, but is there more community? More people caring? Working together? On certain projects, yes, always -- in part because there are more and more well-educated, well-off retired people who want to contribute in meaningful ways -- and yet the gap between haves and have-nots yawns wider with each passing month, and I wonder how long the middle will hold.

Is there any middle left in Aspen? Or is it all nothing but top?

This morning, driving county roads, walking along one favorite dead-end road with Sarah, appreciating fall colors under lowering skies, I found my mind drifting again and again to the friend who just died, thinking of the last long, wonderful country walk she and I (and Sarah) took together and the laughter-filled brunch another friend arranged for a group of us. Even as I miss her, what I’m remembering is good times shared.

I’m also remembering very serious talks we had on a wide variety of subjects. She and her husband were comfortably well off in their retirement, but at the same time they lived very simply -- one car, modest home and material belongings. For “entertainment,” they read books, took long walks, cross-country skied in winter, spent time with friends, watched old movies, and volunteered in local groups. They “had theirs,” but they weren’t looking to “pull up the ladder," and it would be so good to brainstorm with her today on disappearing rental housing. Knowing how deeply she cared about such issues, I don’t have to feel I’m neglecting her memory by dwelling on problems faced by other people.

But I have to retreat somewhat from yesterday’s frustrated outrage, because in many (not all!) cases, there’s more than greed behind the trend that’s bothering me. High taxes are another big factor. “Nice” houses, waterfront property, housing within incorporated village limits – all can push owners of rental properties up against the wall, especially if they have to depend the income as part of their livelihood. Who can afford to rent year-round at a reasonable, affordable price if twelve months of such income will do nothing more than cover property taxes and sewer bill and a minimum of maintenance? Some -- hallelujah! -- can afford to do that and do it. Others can't afford to. Then -- well --. But it's a factor, one way or the other.

One issue leads into another, inexorably. The United States is the only major country in the world to fund public education through property taxes. Unequal tax burdens and resulting inequality of schools result from the system of taxation, and the widening gap between wealthy and poor is exacerbated by differences in schooling opportunities. The nest of complications is staggering.

And yet, my immediate concern is that my friends find a home for themselves and their son before snow flies. They are responsible, decent, hardworking, energetic, intelligent, wonderful people! They are not asking for a handout! There has to be a solution to this problematic situation. 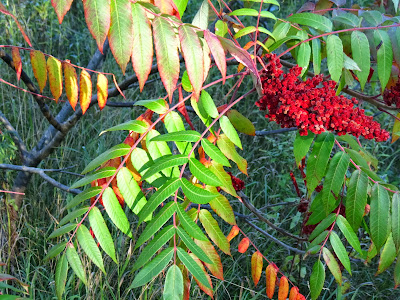 This is difficult. All of it. First I'm sorry to hear of your friend's illness and ultimate death. It's a hard hard thing to lose a friend like that. Nothing I can say will make that better. You are right to mourn and remember.

The housing problem...that's a huge issue. Especially as isolated as you are, there isn't another more affordable option just outside of town, or in the next town over. Surely in a 'community' such as yours there is someone willing to help? We see complete strangers on the news who have suffered tragedy or bad luck and people send money, businesses donate vehicles. Something should be possible for this family.

I, too, believe grieving and gratitude are quite compatible. It is so very said when a friend dies. Why not grieve the passing of someone who brightened our days?