Are We Confused Yet? Still? Again?


The last couple of weeks have been confusing for me, and I've had to work at keeping straight what day it is. Today is Tuesday (I keep reminding myself), and as long as I'm already fighting confusion, I thought I might as well publish this silly draft post today. Changing gears is how adults have to function, isn't it? We need to be able to shift from grief to business as usual to taking care of ourselves and others to being a little bit silly. So here goes --

Woody’s Settling Inn on Waukazoo Street, no longer in existence, was never owned by anyone named Woody. It was Clayton Weeks who bought the old Hotel Bar, fixed it up, and named it after his idol, Woody Allen, featuring on his menu the Allen Burger. Woody’s was next owned by Buzz, and a lot of people thought Buzz had bought the place from someone named Woody, but not so.

Then Woodruff Palmer bought the old Hall and Kellogg Garage building at 106 Waukazoo Street (home of Dog Ears Books for going on seven years now), and it became, unofficially, “Woody’s building,” which was a little confusing. “I’m moving into Woody’s building,” I’d tell people, and they thought I meant the old Woody’s Settling Inn. The two buildings (the latter still standing then) occupied opposite ends of the block. “No, Woody Palmer’s building.” I wanted Woody Palmer to rename 106 Waukazoo “The Palmer Building,” but he thought that sounded too pretentious. The first summer Dog Ears Books had its home here, the building also housed the Painted Horse Gallery and Funky Mama’s consignment shop -- so together we were a vintage dog and pony show, eh?

The old property where stood the Hotel Bar, later known as Woody’s Settling Inn, and also held the original (1993) Dog Ears Books is where the big steel has now risen for the coming Tucker’s of Northport, the planned boutique bowling alley, while the old Hall and Kellogg garage building, present home of Dog Ears Books, is now owned by Clare Gengarelly, who owns and operates a shop called Red Mullein. There’s some confusion about how to pronounce the name, though, so be advised that it does not end in –ion, so it is not like ‘million’ with a different vowel in the first syllable. No. If only that ‘i’ were not there, pronunciation would present no difficulties: mullen is how the word is pronounced, though not how it’s spelled. It isn’t ‘mullion’ as in the window but ‘mullein’ the plant. English spelling is like that. There's also a little confusion due to the new bookshop door. Three separate street entrances! So no, I didn't move again -- I just have a new door and a new wall and another new door, the latter between my place and Clare's. 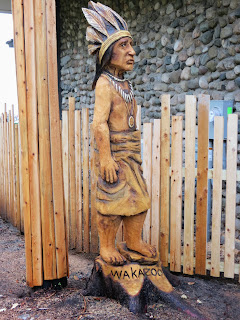 Waukazoo Street takes its name from Chief Joseph Waukazoo, who came north from the Holland, Michigan, area with Reverend George Smith to found Waukazooville, the original of what grew in time to become Northport, and down on the north side of the old depot building (by the marina harbor parking lot, where the farm market is held on summer Friday mornings), some old cedar trees have recently taken on a new look.

The depot and wood carvings are not on Waukazoo Street, but it’s an easy walk from either place to the other – with or without a dog.

Here's my P.S. for the day from the bookselling front: Read it and see what you think -- and what you predict for the future. A good friend the other day (she is also a good customer) came to pick up her book order and explained that she has made a rule for herself: If she learns about a book from me, she orders it from my bookstore. "Don't you think that's a good rule?" she asked. Really, she had to ask? I love that rule!

How interesting again that we're both talking about confusion, or, rather, a cognitive dissonance. Things not being what they seem.

Fleda, I went over to read your post before responding to your comment here and have to say that your reflections on confusion were much, much deeper than mine! Another day I will dig deeper again, going beyond Woody/Woody, numbers of doors, etc.

I'm certainly confused. I think I need a Main Street or something I can spell and pronounce.

I agree with your customer's rule. I kind of do that too...if I read about a book in your blog that I want to read (and I can afford to buy it) I have to buy it from you! :)

Northport has a Main Street, as does the unincorporated village of Lake Leelanau, but both of those Main Streets have become, in the course of history, hidden-away back streets. I love having had four bookstore locations in Northport on streets with interesting names -- Waukazoo Street and Nagonaba Street. Luckily, I don't mind having to spell the street names over the phone, because it's almost always necessary.

I'm just confused naturally. :) My dad has two wooden Indians in the basement. I also am impressed about your friend's rule. Sounds a good way to go.