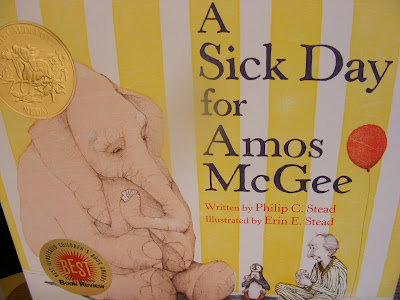 Here at week’s end, I’m sorry to report that February has brought illness to many Up North residents—colds, flu, what-have-you. The only way I can think to turn the sad fact of illness in a happier direction is by telling you of a children’s book that has won both the Caldecott Medal and the award for Best Illustrated Children’s Book from the New York Times. Here it is, A Sick Day for Amos McGee, written by Philip C. Stead and illustrated by Erin E. Stead. 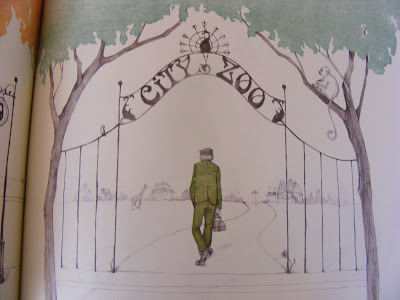 Amos the zookeeper loves his job at the zoo and always manages to spend “quality” time with his animal friends. What will the animals do when Amos has to stay home sick? You might make a general guess, but you’ll want to investigate more closely so as not to miss each engaging encounter. 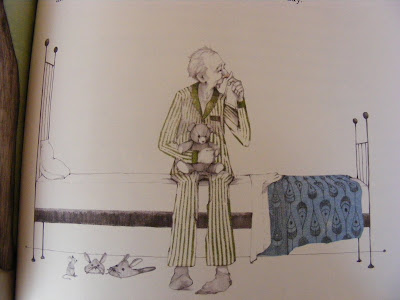 Making this an even better story, I can report to you that the Sneads divide their time between NYC and Ann Arbor, Michigan.

I’m in Part VI (of VIII parts) of Anna Karenina, and things are not going well with Anna and Vronsky, which is no surprise to anyone who has read the book before, as I have, but would probably not surprise anyone coming to it for the first time, either. I set Tolstoy aside to read yet another delightful book by Oliver Sacks, this one his memoir, Uncle Tungsten, which allowed me to live a vicarious boyhood in London. Then it was off for a trip to New York City during Prohibition with Archy and Mehitabel, the irrepressible cockroach and alley cat duo created by Don Marquis. Everyone should make the acquaintance of Archy. It’s difficult, though, as the fictional bookseller in The Haunted Bookshop learned when his wife objected to his taste, to find excerpts to convey that adequately convey Archy’s charm.

That was the cockroach talking, but it’s Archy’s pal, the alley cat named Mehitabel, the free spirit claiming to be “always a lady,” who is the star.

I want to go back a couple of weeks to say a word about Allen Shawn’s memoir, Twin. Well, two words. First, it is called a memoir, so I’m not sure why I expected it to be more about his autistic sister than about his own life; once I got over my faulty preconception, however, I enjoyed the book much more. Second, the audience I expect to be most fascinated and moved by this book is not parents or siblings of autistic children or memoir readers in general but people interested in what goes on in musical composition. Shaw is a composer, you see, and the way he writes of composition and how he grew into it is unlike anything else I’ve read. Musicians and music lovers, here is a book for you, though actually it will interest anyone interested in odd “corners” of the world and the human psyche.

Finally, you could do worse this week than to pick up a copy of the New Yorker magazine, the Feb. 14 & 21 issue. An Adam Gopnik essay begins on page 124 and is, as always, worth several times the cover price of the magazine. Bear with me while I quote just a fragment (and I promise to do so briefly, despite all the many underlined sentences and bracketed paragraphs in the magazine in front of me). He has introduced “cognitive entanglement” and the ways spouses’ memories intertwine, and then comes the Gopnik arabesque:

Google is really the world’s Thurber wife: smiling patiently and smugly as she explains what the difference is between eulogy and elegy and what the best route is to that little diner outside Hackensack. The new age is one in which we all have a know-it-all spouse at our fingertips.

I happen to have in stock, right now, a new paperback copy of Adam Gopnik’s Paris to the Moon and have no hesitation in saying that this writer is a treasure of our time. If Don Marquis hadn’t created Archy the cockroach, Adam Gopnik might have.
Posted by P. J. Grath at 7:21 AM

I'm sorry people are sick. We're a bit under the weather ourselves--I think it has to do with running round with our coats hanging open on the first pretty days . . .

The book looks like good medicine, though - I expected a little kid, and there was Amos! Oh good.

I'm fond of archy and mehitabel, too. I once learned one of those poems and recited it at Stone Circle. But that was before my mind filled with large gaps, and all the poems fell into them.

Finally, a friend sent me a little joke that went something like, "When you're searching for Mr. Right, make sure his first name isn't Always."

I should explain that I (knock wood!) have not been sick (yet?). David has had a cold for about a week, the "My-head-feels-like-a-bowling-ball" kind of cold, but nothing worse. Another friend was down in bed for a week, without the strength even to clip her fingernails. Things "go around" this time of year.

I'm impressed that you recited Archy & Mehitabel at Stone Circle. Seems it would be very challenging work to recite. The high point of my poetry recitation attempts over the years was "To a Mouse," by Robert Burns, one New Year's Eve. But I think I've bragged about that before....

(Yes, there was a smudge on my camera lens.)