What a lot of nerve I have, blogging about gumbo when I’ve never lived in Louisiana or Texas and have not a drop (as far as I know) of Cajun or Creole blood! But gumbo is what I wanted to make for David and Michael’s combined birthday dinner the night before Phase 2 of the kitchen remodeling project was kicked into high gear. Only after making my own chicken-sausage-shrimp gumbo, very slightly modified from Bubba Gump Shrimp Co. Cookbook, did I seek out other versions.

When it comes to recipes for gumbo, the variety is infinite, but two themes are always present: (1) The roux made with browned flour is essential, as are (2) celery, onion and green pepper. The rest, as far as I can see, is up for grabs.

Paul Prudhomme, in his Louisiana Kitchen cookbook, starts by coating chicken pieces in flour, salt, garlic powder and red pepper and frying the chicken, adding more flour and oil to the bits left in the pan to make his roux. He recommends high heat and constant whisking. The lower the heat, the longer the cooking time.

If you brown the flour in the oven (as I did, the night before making the gumbo), how long should it brown? Different cooks’ opinions and experience call for anywhere from 35 minutes to 2 hours. Some say to stir; others say “Don’t touch it!” But however you brown the flour, attention à la roux! “If the roux is underdone, the gumbo will have a kind of floury taste and texture, whereas if you burn the oil, it will taste like burnt oil.” The site giving this important advice looks very authentic and has recipes for catfish gumbo and crawfish gumbo, too.

Some people use tomatoes, others omit them. If you’re using sausage in your gumbo, what kind of sausage should it be? Andouille is held in high regard. Smoked sausage, in general, gets big votes. I had (organic) chorizo in the freezer but then, at the last minute, worried that its spiciness would overpower the chicken and shrimp I had set my heart on. Turned out it was not a good day for sausage shopping at our local grocery store, and I didn’t have time to go anywhere else, so summer sausage got the nod.

Then—well, I’ll give you some links to a few recipes I found online, then tell you how I made mine, which as I say started from a cookbook, one on my shelf at home. If you have a good cookbook library, see what you can find. As for online recipes, there are many, and what I’m giving here is only the tip of the iceberg. Gumbo is good eatin’ on an Up North winter evening.

Let’s start with a recipe from south Louisiana. Looks good. In another, the flour is not browned. Can it be for real? I’m dubious.

From New Jersey comes a recipe that instructs the cook to brown the flour in pot. Many recipes use this method. The ingredient list from this Texas recipe leaves out the okra, with this note: “And while the word gumbo stems from the Bantu term for okra, kingombo, I didn’t add that as well even though it’s quite common to include it for both flavor and its thickening power.” Personally, I cannot conceive of gumbo without okra. But then, I am only a damn Yankee, doin’ the best I can. Anyway, I’ll be trying variations in future, but here’s what I did this February:

First, the night before, I browned flour in the oven in a shallow pan, "roasting" it for 45 minutes and stirring 15 and 30 minutes along. The aroma is strange. I was glad I got that smell out of the way the night before.

Late Friday afternoon, I cooked chicken pieces in a big cast iron pot with lots of water for 45 minutes to create a good, rich broth and then removed the chicken pieces to cool in a colander.

I chopped celery, chopped green pepper (excuse me, bell pepper), chopped onion and garlic and sliced green onions (scallions) and tossed these into a second big pot with olive oil and sauteed the vegetables, turning often with a spatula as they cooked.

To the sauteed vegetable mixture I added the browned flour and, a bit at a time, some of the chicken broth, stirring as it thickened.

Skinning chicken pieces, I took meat off the bones, cut it into small pieces, and added chicken pieces and sauteed vegetables with flour thickener to the broth, along with a can of diced tomatoes oregano, salt and pepper. Unfortunately I was out of bay leaves (at least, I couldn't find them in the confusion of the kitchen project, with boxes of ingredients and piles of dishes all over the house), so I added a very small amount of chopped sage (three small leaves, chopped fine), harvested from outdoors at the last minute. Summer sausage, diced large, was added at this point, also, and then everything simmered for another 45 minutes. While this was simmering and smelling better and better, I had plenty of time to shell and devein the shrimp. 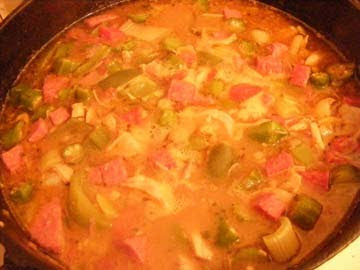 About 20 minutes before dinner I added a bag of chopped okra, and, ten minutes later, the shrimp.

At the very end, I added the filé gumbo powder (which is ground thyme and powdered sassafras leaves).

I served the gumbo in big flat bowls with a pile of steaming rice on top (some people ladle the gumbo over the rice), with hot sauce on the side, an option for diners. Delicious, if I do say so myself!

Sorry I didn’t photograph the gumbo and rice in the bowls. It was beautiful, but we were very focused on digging in.

The next morning, the kitchen was half-gutted again (not the sink and new countertop side), old flooring taken up so new tile could go down. It will be a couple of days before we’ll be cooking in the kitchen again, but--lunch for the remodeling crew? Where’s that pot of gumbo? 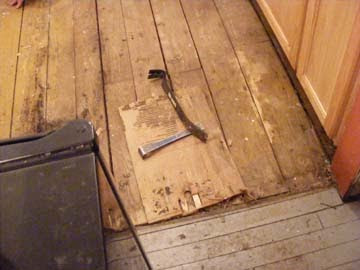 What a great read on a cold, snowy New York morning! I love Cajun and Creole cooking, especially gumbo. I've taken cooking classes when ever we've visited New Orleans. Celery, onion and bell pepper combination is called the Holy Trinity and a browned roux is what makes a gumbo a gumbo. I've not heard of browning the flour in the oven. Interesting idea. Where did you find file? I've looked for it when I've been in your area (soon to be mine, too).

Always been sort of afraid of gumbo....not being a shrimp fan...but I am betting it could be make without?

Dawn, you can definitely make gumbo without shrimp. I was trying to imagine last night, as I was going to sleep, a completely vegetarian gumbo. That was tricky, but there must be recipes for that, as well.

Anonymous (Marjorie???), the two most challenging ingredients to find were the filé gumbo and the okra. Hansen’s in Suttons Bay carries okra but was out of it the first couple times I tried, and no other stores in our end of the county had it. I was surprised that filé was so elusive, with all the foodies around here. Finally my friend Susan C. offered jar of filé, saying that she’d somehow ended up with two, and by then Hansen’s had restocked the frozen okra.

Well, of course it was Marjorie! Her name was right there! Sorry--I'm a little spacey this weekend, with all the hubbub and celebrating and all.

Well laissez les bon temps roullez, Babycakes! I find that the very best way to have excellent gumbo is to have good neighbors born and raised in Louisiana. Sharon and Goldman used to bring back coolers of necessities whenever they went on down home to N'Orleans for a visit. Fresh shrimp and okra and coffee with chicory and andouille sausage and heaven knows what all else, but oh my, did it taste good. Yes indeed, good neighbors are a great blessing.

Good neighbors are a treasure wherever they were born and raised, and you're lucky to have Louisiana folk as Torch Lake neighbors, Gerry. I can only take heart from an e-mail from a friend who married a Louisiana man. She wrote to me, "Just as a woman can write a male character or a white a black one, so a northerner can make her own gumbo any damn way she pleases! And if it pleases ... that's all the vindication she needs! Godfrey never makes his gumbos the same way twice: sometimes with okra or file, others without, sometimes with shrimp, sometimes with chicken and sausage ... AND he enjoyed a gumbo made at a "New Orleans" party last year by two northern women who'd never even had gumbo before. So cook on!" Thanks, Laurie!