Midway Through the Shortest Month 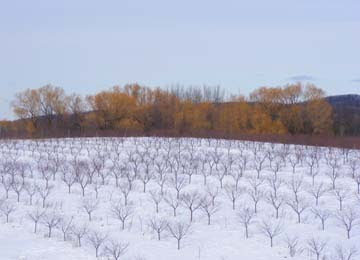 Rick Bass writes of winter depression (in The Wild Marsh) as “the February effect,” even while he acknowledges that it may come as early as October (as colorful leaves are blown from branches to ground and days begin later and end earlier, I muse) or as late as March (which here in Leelanau vies with April for the crown of “Cruelest Month”). He writes of having come (“The older I get...”) to deny a connection between seasonal moods and character. I have been working for over 20 years to see blue moods as weather, something to be endured rather than a cause for meta-depression (“What’s wrong with me, feeling this way?”). Bass has a more poetical, metaphysical way of expressing the matter, postulating “some hand-from-above, or some wave-from-below,” and he describes the hesitation with which he approaches February days, even in “good” years:

...I sense those distant swells below, & venture forth into the world cautiously, not cockily. I advance in the manner of some ground-hugging, upland bird, a grouse or quail, that pauses and then freezes anytime the shadow of a hawk passes overhead.

A friend of ours with an indoor job this year (retail) spent a lot of winters past on an orchard crew, and he told us recently that the two sunniest months of the year in our part of northern Michigan are July and February. He had no scientific evidence to back up his claim, he said, almost apologetically, but here was the telling detail in his personal observations: Many February afternoons, he said, between one and three o’clock, the sun would be warm enough (and reflecting off the snow, don’t forget) that the guys pruning trees could shed one layer of clothing after another until they were working bare-chested, “and that way,” he concluded, “we could avoid ‘pruner’s tan.’”

Do you know about ‘pruner’s tan’? Unlike ‘farmer tan,’ it does not involve a bronzing of neck and forearms, only face, so you might see a guy from a pruning crew all bundled up in his winter jacket and scarf and gloves and think he’d just returned from a vacation in Jamaica—until he came indoors and shed his outerwear, when you’d see that only his face was brown. Pruner’s tan. Add it to your Up North vocabulary.

Tan or no tan, regardless of layers of clothing required, February holds fewer terrors for me and much less angst now that I can think of it as a rival to July in terms of sunny days. (We’ve had a few lately, too, and what a difference they make!) I suspect that what is true for us may not be true of Montana, but the bright golds and yellows of the willow trees that Bass greets with such enthusiasm in February brighten the Great Lakes winter, too. That’s what caught my eye when I photographed the scene that opens today’s post.

Finally, while we’re not big in our household on greeting card holidays, I have no intention of ignoring Valentine’s Day completely. From feelings frivolous to commitment enduring, the world can always use more love, and we in northern climes can always use more ways to brighten a month fraught with potential for morbid thoughts. So here are my three cheers for February 14: 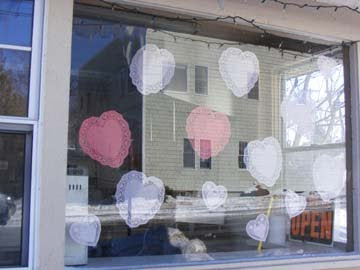 The restaurant is closed for the winter, but the owners have decorated their windows for passers-by. That OPEN sign you see if facing in; the side facing out says CLOSED. The valentines' message is obvious and unequivocal.

Joyeux jour ou joyeuse fête? Canadians are divided. Either way, it's a greeting brimming with goodwill.

3. Together a long time:

Very cool (or should that be warm?) that your sunniest days are in February and July, and that the pruners can actually take off their shirts during one of the supposedly coldest months. From one season to the next, I always enjoy seeing the rows of fruit trees in your photos.

The orchards are beautiful to me, too, in every season, Amy-Lynn. And now I'll be keeping my eyes open for bare-chested pruners in February, a sight I have yet to see!

Is it really the shortest month? Methinks I had forgotten that in the depth of winter. Thanks for this lovely post, Pamela.

Yes, it really is the shortest, Kathy, and since this is not a leap year it's only 28 days. We had sunshine on Sunday and more again today--blindingly bright today, in fact. It feels almost like (dare I say it?) spring!