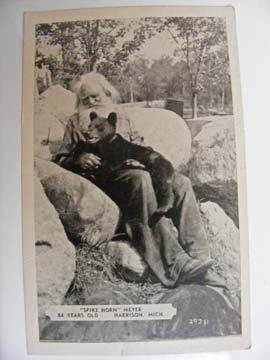 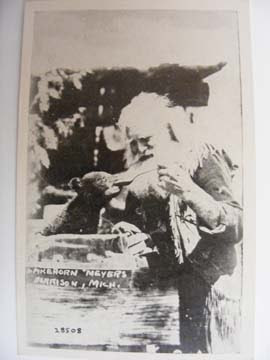 First, as promised, a couple postcards for Gerry Sell, who wanted to see Spike Horn Meyers of Harrison, Michigan. We are told on the front of one postcard that the man in the photograph is 84 years old. The back of the other card is simply titled “Bear Den.” What is the man feeding that bear cub, and what is the Spike Horn story? Gerry, do you know?

Our second stop on week’s promenade is the “Old Club” on the Ste. Claire [sic] Flats. 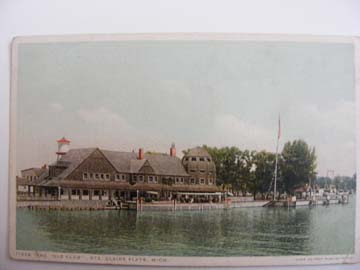 Detroiters know all the suburbs beginning with St. Clair (Shores, etc.), but David graduated from high school in the little town of St. Clair, up toward Port Huron, and at least once, on a trip to visit his mother, we explored the Flats, including Harsen’s Island. (Take the tour yourself. You’ll be glad you did.) The St. Clair is a magical, mysterious river, and the architecture of this old shingled building has a lot of romance, to my eye. I remember buildings like this along the river, where now it’s all condos. 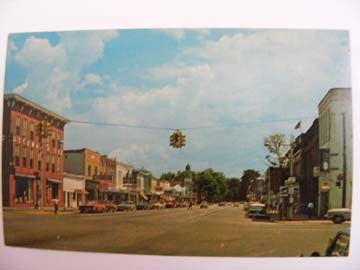 Dear little Paw Paw! Down in southeast Michigan, in Van Buren County, this sweet town was the object of many pleasant weekend “country cruises” when we lived in nearby Kalamazoo. From spring through autumn the chief enticements (besides friends who lived there) were a couple of flea markets west of Paw Paw. Once I took my son and a friend of his to the flea market, and we came home with a kitten; luckily for the kitten, the other boy’s mother said he could keep it, and the cat had a happy home for many years. There was always something wonderful waiting at the flea market. Once it was the world's ugliest boat, which turned out to be the most-used boat of our lives--another story for another time. But downtown Paw Paw was interesting, too. The Dyckman House on the left in this photograph was an old hotel featuring an incredibly cheap dining room. How could they serve meals that cheap? Well, yes, it was pretty shabby in those days, too.... A smaller cafe down the street to the west (behind the photographer), went through many incarnations and was briefly called the Gnomes Inn. A friend worked there as a waitress in the Gnomes Inn phase. I seem to remember a “Smiling G” (Goodwill) store, and there was a wonderful, old-style Ben Franklin, back when BF still had all manner of merchandise, not just craft stuff. Paw Paw is memorable for David and me, also, in what no one else can see, either in this postcard or right there in person: it was the home of one of our first imaginary bookstores! Which building would you choose to house a bookstore?

Have you visited Harbor Springs lately? Pretty chichi, isn’t it? No one looking at the present-day marina would picture the waterfront looking like this. 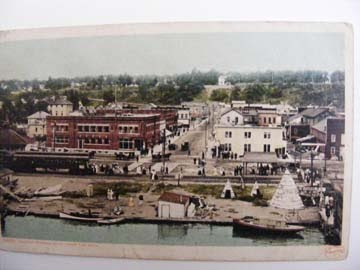 Small, simple boats, an obviously much-used railroad, horse-drawn buggies and carriages, but I don’t see any traffic jams, although judging from the green leaves on the trees, this must be the height of the season.

I’m including the Kellogg postcard below for my Australian friends because--look! On this card the cereal company’s Sydney, Australia, plant is featured front and center! Snap, crackle, pop! 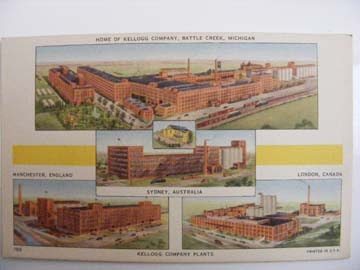 Now back to the “Sunrise Side” (as people on Lake Huron and the St. Clair River call the eastern Michigan shore) to visit Port Huron as shown in four different cards. The first is the oldest, obviously, and I don't know the locale. The other three, from only about half a century ago, judging by the cars, are downtown scenes. View #2 is looking south, views #3 and #4 (see the same large building on the right in both?) looking north. I strain my eyes in that night scene for Diana’s, the fabulous dreamlike sweetshop, on the left-hand side of the street but can’t make it out. Oh, those polished wood booths! The tiled floor! The jukeboxes and the mechanical instruments in glass cases! The hot fudge sundae with gobs of real whipped cream! Can you believe what I'm going to tell you next? Diana’s was bought, disassembled, moved and reassembled in Nashville, Tennessee! “You can still go there,” my informant told me. “You just have to go to Nashville.” Nothing against Nashville, but oh, I wish Diana’s were still in Port Huron! The Eiffel Tower belongs in Paris, and London Bridge belongs in London! Too late, too late! 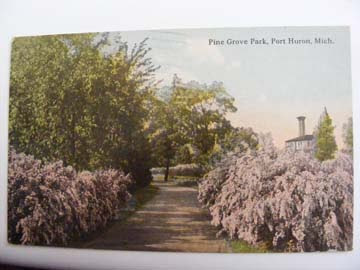 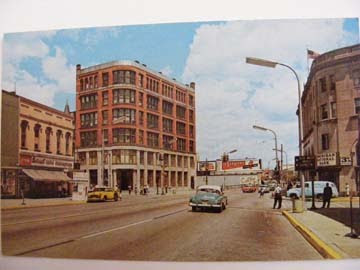 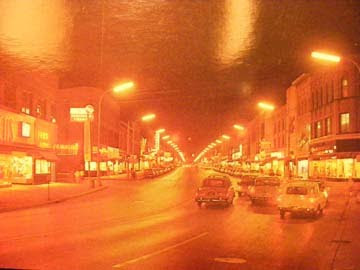 It’s a little late for Christmas and New Year’s greetings, too, but a winter scene on my last card for today is not inappropriate for February Up North, even though we're having a stretch of warm, sunny days that feel like spring, and snow and ice are melting fast! 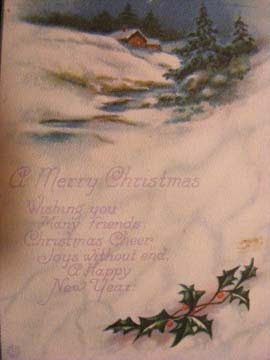 Next week, back to Leelanau--and what other surprises might I unearth?
Posted by P. J. Grath at 1:14 AM

PJ -- These postcards are real treasures. I love that stuff.
Here's a short film from the 1940s, "Roaming Through Michigan," that features Spike Horn Meyers -- as well as Sleeping Bear Dunes and many other highlights across northern Michigan. It's the film version of a vintage postcard: http://www.youtube.com/watch?v=QMR7veI78f8

Thanks for the tip, Jerry. Sounds like you have found a video treasure for us, too.

(Yes, fellow readers and booklovers, this is THE Jerry Dennis, and his new blog is over there in my list, so check that out, too.)

This video is a MUST-SEE! Thanks again so much, Jerry, for sending the link. I found another from the same era but without Spike Horn and with a much lower viewing quality.

Ohboyohboy--I love the postcards, I'm letting the video load (should be able to watch it sometime this week :) ) and I looked for Terry's poem and didn't find it. I sent an email to Woots to ask 'em to help. Terry went to see the famous Spikehorn when he was a boy, and memorialized the place in a poem about an eccentric who kept bears and allowed children to pet and feed them. Not something that a tourist trap could do these days. You probably already know this from the video, but you'll still like the poem if I can find it. Some days . . .

You will love the video, Gerry, and I'll look forward to the poem. There are a few misleading items in the video ("Leelanau" is not a Native American word, and very few cherry pickers looked like the ones you'll see in the travelogue, even in the 1940s), but most is probably accurate, and it's great fun.

You will love the video, Gerry, and I'll look forward to the poem. There are a few misleading items in the video ("Leelanau" is not a Native American word, and very few cherry pickers looked like the ones you'll see in the travelogue, even in the 1940s), but most is probably accurate, and it's great fun.

I found Terry Wooten's poem about Spikehorn and have posted it below. Spike is one of the inspirations for Stone Circle. :-)

There was a magic place
called Spike Horn's Bear Camp,
located just south of Harrison
on old U.S. 27.
It was the only place
in lower Michigan where a person could
feed or pet a black bear without
zoo bars between you and the animal.
Bears, in case you don't know,
are one of the most unpredictable animals.
The police finally closed old Spike
Horn down for safety reasons.
I was there only once in 1950 something.
It was the day after they carted
old Spike Horn off to jail for a week,
for hitting a cop over the head
with a frying pan.
I can't remember seeing any bears.
They must have carted them off too.
I bought some postcards and a pennant
that are probably collectors' items.
They show old Spike Horn with a Rip Van
Winkle white beard and flowing white hair.
He's feeding full grown bears
from his hands and mouth.
He's sitting on a stump
with two little girls,
letting the littlest feed
a huge black bear from her little hand.
He's standing with his favorite bear,
posing hand-in-paw in the middle
of thirteen uneasy people.
He's gone;
gobbled up by the red tape of a new age.
Old Spike Horn has passed on
in the parade of time,
and so have his bears.
And now the tourists can breathe
a little easier.

Thank you, thank you, thank you, Anonymous! You have made this post complete. Now if only we knew your name! Can it be Terry Wooten himself or someone else from the Stone Circle gang? Whoever you are, we're all grateful to you, and I love to picture Spike Horn wielding his frying pan, which was surely cast iron, don't you think?

Hi PJ! It was Wendi Wooten, wife and intrepid business manager of the bard of Stone Circle, who took care of business right promptly, as she always does.

Now you have the poem. Shall I tell you the oral postscript that you will hear if you visit us at Stone Circle?

Thanks again to Wendi, no longer Anonymous. (Gerry has blown your cover, Wendi.)

Gerry, who could say no to your question? It was rhetorical, wasn't it? Postscript, please!

Pam,
I teach Michigan History at MMCC where in the campus hallways they have several great old photos of Spikehorn and his bears. I also the great 1949 video "Roaming Through Michigan" that is mentioned on this site. Just a mile from the campus is what is left of The Spikehorn, with its rundown fence and sign...a remnant of the days when we took the 'blue' roads and actually stopped at places other than fast food chains.
George Wylie

Hi, George, and welcome to Books in Northport. You are Ken's brother! I'm tickled to see you here. David and I still, whenever possible, take the blue roads. I love being IN the countryside and going through all the small towns. Took a memorable road trip once with a fellow graduate student from Ethiopia; we traveled blue roads from Cincinnati to Chicago and stopped at small town diners all the way along. No bears, but it was a great trip.