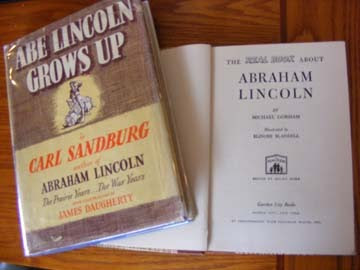 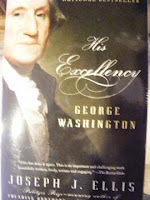 When I was growing up in Illinois, we schoolchildren had Lincoln’s birthday, February 12, as a holiday. Washington’s birthday, February 22--did we get that day off school, too? I honestly don't remember, but naturally our grade school classrooms were full of lessons about the Father of Our Country in February. Every state has a few holidays that other states don’t have, and Chicago and suburban schools still get the day off for the birthday of the Polish hero of the American Civil War, Casimir Pulaski, whom you can learn about here. No, he was never a president. I digressed, thinking about regional holiday differences in the U.S.

In 1971 President Richard Nixon decided we would have one national holiday to honor all American presidents. I suppose it makes some sense, as holidays could otherwise proliferate like the feast days of saints, but honoring “presidents” rather than Lincoln seems like rather a bowl of thin gruel to someone who grew up (though was not born) in the Land of Lincoln. And really, don’t we all believe, whether or not we would agree on a list, that some American presidents have been more deserving of honor than others? There’s potential for another digression, but I won’t take that particular side road today. 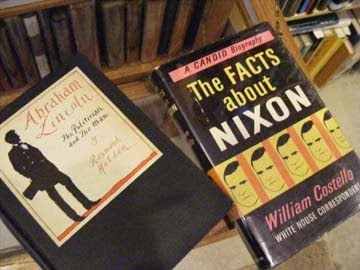 What does Presidents Day, or Presidents’ Day, if you prefer (but please, not President’s Day, the whole point being that it’s not just about one president!) mean to those not in a classroom? That’s what I’m really wondering. What does it mean, and what could it mean? Another day for big retail sales? When did that notion get started, anyway? “BIG WASHINGTON’S DAY SALE!” Somewhat bizarre, don’t you think? I never could understand it, much less get into it.

Here’s my proposal. Since this Monday is a holiday for all federal employees, the post office is closed, and there is no mail delivery—making this the perfect day to sit down and write a letter! Why? To give pleasure to someone you love and, at the same time, to salute and support the United States Postal System. I’m talking about tangible support, not just lip service. Go to the post office tomorrow, buy stamps and send mail!

Some Americans think we don’t need a government postal service and that all mail and shipping services should be privatized. I disagree. Mail service guaranteed to everyone in the country, at reasonable cost, is part of the bedrock of democracy, every bit as important as public education, in my book. As for the reliability of the post office, I have shipped books USPS since my career as a bookseller began in 1993, and never once has one of my book packages gone astray. Not once. I know other people have less happy anecdotes to share, but over 18 years’ experience as a business shipper has to count for something. 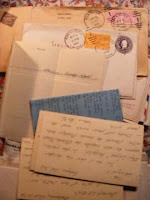 Mine was a family of letter writers, as I’ve written here before, a family for whom the arrival of the mail was the high point of every day. Going to the post office once a week to pick up mail from a special box, my father’s job as officer in some organization at the time, and to send out letters and packages was such a special treat that my sisters and I had to take turns. The sound of the metal mailbox lid (Clink!) beside the front porch door, the impressive way my little footsteps echoed on the marble floor of the downtown post office, the beauty and variety of postage stamps and the possibility (remote back then) that something very special might come in the mail for me was all part of the thrill. My father smoked an occasional pipe, you see, and every year as a girl he and I solemnly entered the Kentucky Club contest. The prize was a racehorse, and to enter we sent in empty tobacco wrappers and a form with the name we would give the horse. Who knew? A girl could dream, and maybe one year....

We never won the racehorse, but I never lost those early feelings of pleasure I associate with the U.S. mail. The time it takes, the non-instantaneous aspect of the mail, the anticipation, is part of what makes it delicious, although through the course of history the time lag between a letter leaving one place and arriving at its destination has progressively shortened. Recently I sent a small package to Australia, imagining it might take months to arrive. How delightful to hear that the book and newspaper were only about a week and a half in transit—and now my new Australian friend has put something in the mail to me! I am so excited! 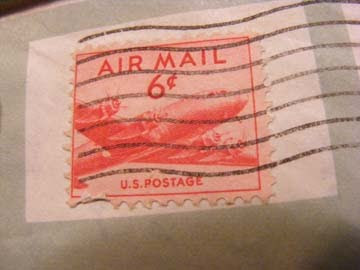 Last week the mail brought me a letter from a local friend spending the winter out West, a valentine from old graduate school pals, a mystery package of treats from the U.P., and a thank-you note from another friend right here in Leelanau. Pleasure, pleasure, pleasure! 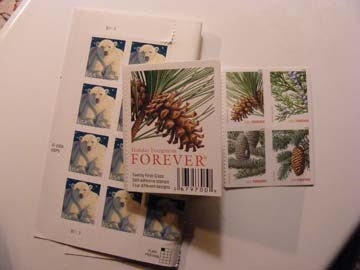 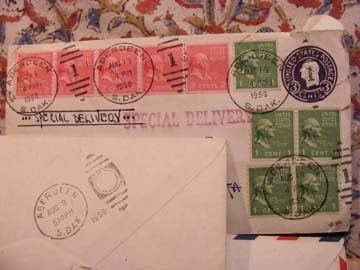 Last year my mother sent me a package containing letters and postcards my father had written her when I was a baby in South Dakota. That’s another thing that makes it delicious: the enjoyment of reading one’s mail can be repeated, if desired, for a lifetime. Of how many pleasures can that be said? 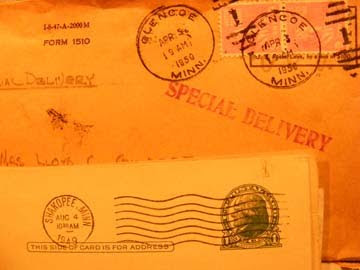 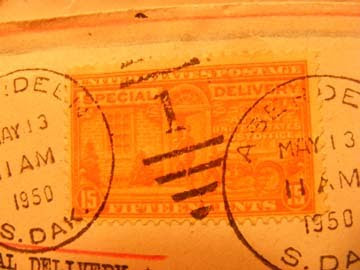 Here are a couple of ideas. One is to make a commitment—yes, I’ll step up first in line—to mail a note or letter to someone you love at least once a week (different someones okay) from now to Memorial Day. The other idea, an additional option, is to mail a book to someone you love once a month in March, April and May.

Note that books can go “media mail,” the new name for the old “book rate” (thank Benjamin Franklin, too, every time you mail a book), but please, if you include a letter or note, don’t cheat! Personal messages included with books mean the whole package needs first-class postage. Sometimes I send the letter and the book separately. Other times I figure it’s worth the extra cost to tuck that letter inside the book. It’s still a bargain when you imagine the joy on the recipient’s face.

Finally, thanks to Gerry Sell for prompting this commitment and challenge.
Posted by P. J. Grath at 9:20 AM

I think it's an extremely good idea to mail off a book a week. It's one way to get the surplus out of the attic. But I am not making a commitment! No indeed, I'm simply turning the idea over in my mind.

Sounds like a plan to me! I LOVE getting real letters, used to write to my Mom down in Alabama every Saturday. She wrote to her mother every week too, even though we only lived an hour away from Grandma.

Heading toward my address book now...

Writing letters this cold February morning gives me something positive to do while we wait at home for the septic guy to come see what's going on with our pump. Oh, the joys of country winter living!

Dawn, I have seen postcards sent between Omena and Northport and between Northport and Lake Leelanau. No one expected instant responses in those days.

Gerry, your uncommitted modification is a noble one. I have faith in you!

Hooray for real mail! I've kept every letter that's ever been important to me. One special file allows me to relive the pleasure -- the absolute, deep-in-the-gut, dance-around-the-room joy -- of a young writer receiving his first acceptance letters from famous publications.
Try as I might, I just can't save emails.
Like P.J., I've been going through a lucky spell: postcards in the past few days from Vietnam and India. Contact!

It's frustrating about e-mails, too, isn't it, Jerry? I mean, I have e-mail correspondence that is very important to me, and that I "save" in "folders," which is to say it's still there in my computer--for now! But everything on my first computer is gone with the wind, and printing out e-mails to save them is not at all the same, even if I could bring myself to do it, and I can't. I'm glad you save letters, too, that you have such exciting letters to save, and that you got POSTCARDS in the mail this week. There's another change: people send photos through their phones rather than postcards. But who keeps phone photos?

Pamela, I love hand written letters and everything to do with them. I once read the story of family members writing secret messages behind the stamps on letters sent to loved ones imprisoned in concentration camps during WWII.

Handwriting a letter a week is an excellent challenge for me.

Amy-Lynn, are you taking up the challenge? I got an e-mail today from a friend who was thinking of promoting handwritten letters on her blog, and I'm hoping she'll go ahead and do it, too. Now she and I need to sit down with pen and paper and write letters to each other. I think I'll do that tonight....

Wrote my first letter last night. As I thought about it I realized there were several people I'd been meaning to write to...for a long time...so I'm on the way! Thanks for the challenge!

I needed to challenge myself, and it’s working quite well so far. Also, I love the thought of all these letters flying through the air! It’s as if we’ve stirred a flock of birds into flight!