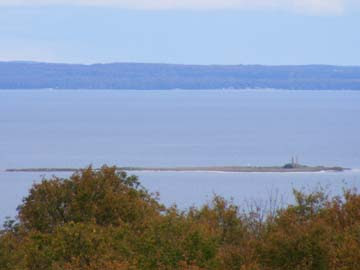 This is a view from the Leelanau County side of Grand Traverse Bay looking east to the Antrim County side. You can ignore little Gull island today. It's the far view horizon where the story is set.

A hundred years ago, the last leg of a journey to a northern Michigan resort might well by accomplished by water. Leland would be approached by way of Lake Leelanau from Perrins Landing, Northport and Omena via Grand Traverse Bay from Traverse City, and Alden (then Spencer’s Creek), Eastport and Bellaire through the “chain of lakes.” So now, come back with me to 1911, where Luella, the first narrator of L. E. Kimball’s A Good High Place, is practicing fly-casting from the deck of her father’s passenger/light-freight steamer, the Mabel, a boat that runs the inland waterway from Elk Rapids up to Eastport through the Torch River and Torch Lake.

I tie on a piece of red yarn instead of a fly, pull out several feet of line with my right hand, and shake the tip of the bamboo rod until the line works its way to the end. Then, holding the rod at twelve o’clock, I lower my arm quickly and smoothly until the rod stops at nine o’clock and the red yarn shoots out ahead of me in a neat roll cast. I strip more line and recast, this time bringing the rod slightly out to the side and back to one o’clock, holding it until the line floats up behind me. Then I bring my arm down to ten o’clock. A pretty fair back cast, which by now has worked the line out a good forty feet. I cast the way I live: not without finesse but with a tendency to overreach, cast too much line to handle.

There are three main characters in A Good High Place, as well as at least three other pretty important ones. Luella begins the story in 1962, having just returned to Elk Rapids, the scene of her childhood, at age 63, and her narrative, in the way minds and memories work, dips back and forth between past and present. Kachina and Keane both appear in Luella’s version of the past, but in the second part of the book we meet Kachina, a Native American woman, in her own life.

She stands, stretches up to her full height of almost five feet, reaches her hands up higher yet and runs them across the oak beam that spans the length of the small log room. She has never wanted more than the one room. Not because she objects to convenience or is disdainful of creature comforts. She objects to the space things manage to displace inside her head, leaving no room for her thoughts. Besides, the roof obstructs her view of the sky, and a bigger roof would simply obstruct more of it.

It is through Kachina’s eyes that we encounter the Northern Michigan Asylum in Traverse City and unexpected aspects of Keane’s character.

Finally there is Keane himself, the man whose youthful animal vitality drew both Luella and Kachina to him in their different ways and kept all three connected decades later. In the early years Keane was sometimes Luella’s fishing partner, while later in life he built Kachina’s cabin.

The river taught me something, he says. Taught me I can stand and fight the current, or I can lift my feet and float on downstream. His hand floats out over the stream like I pictured his body doing. He keeps talking. There are times when you have to do one thing and times when you need to do the other.

Throughout the novel, fly-fishing serves as a metaphor for life, as in "Another point about fishing: you can’t always see them. The fish. And that doesn’t mean they aren’t there." Who else is there, still part of the story, but no longer visible in the landscape? Luella’s mother and baby Emily? Luella father, Cap, and her Uncle George are still alive but each, in his own way, as elusive as trout in a stream. 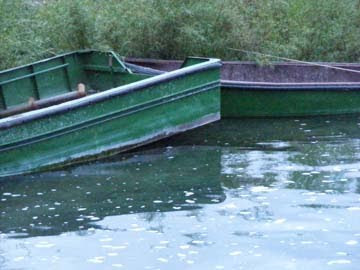 And yet, I don’t think it’s only the fishing or the northern Michigan location or even the combination of the two that reminds me of the best of Jim Harrison’s fiction. The comparison didn’t occur to me at all the first time I read A Good High Place, but my second reading has been different, and I keep wondering what, if not northern Michigan, if not fly-fishing, keeps reminding me of Harrison as I read Kimball’s lucid prose. There are the literary allusions, for one thing. But there is also a certain way this author connects with the characters her own mind has created and put down on paper, characters who now have their own complex reality. A Good High Place has the “moral ambiguity” Don Lystra referred to in a recent e-mail to me, that sense that right and wrong are rarely black and white in situations we confront when growing up and in everyday adult life, so that a novel that presents unalloyed heroes and villains misrepresents life. This author also has a deep, writerly appreciation for the past, in which each of us continues to live even as we move through the present, that present increasingly dense with memories and associations.

There is a lyrical quality to this writing, and there is truth that transcends whatever historical facts the author has used or invented. One truth that particularly impressed me is the presentation of friendship as something complex, mysterious, complicated and at times downright uncomfortable and bothersome. There is no shortcut to a long relationship, whether a long marriage or a long friendship. At the beginning of a relationship, those who will become friends sometimes have to overcome initial antipathy toward one another, and along the way, as each one experiences and perceives a different subjective world, there will be further opportunities for misunderstanding and hard feelings. Yet at the same time, beneath the storms, bonds once forged--in whatever curious manner they are forged--will build their own history over time, and this history of intimate relationships growing up inside a larger community and world history is part of the genius of L. E. Kimball’s fiction writing.

I was fortunate enough to have a visit with Lynn Kimball last Friday at Dog Ears Books, where one of our topics of conversation was all the complicated ways readers come to any writing by white authors portraying characters from other ethnic groups. I admitted to Lynn that when I feel a Native American character is put into a book simply to provide "local color," it bothers me. I see it as Indians being used all over again for their own purposes by white culture, and my wariness about this sometimes prevents me from entering fully into a work of fiction. Kimball's reasoning for including Native Americans in her story is simpler: "They were there." The historical period in which her story is set would not be accurate without them. Also, we agreed that characters in a novel are not intended by their author and should not be taken by readers as ethnic representatives. Each character in a good novel (and this is a very good novel) is an individual, and within any cultural or ethnic group, within any historical period or community, there will be differences across individuals. My initial wariness, which I must admit is a personal prejudice, melted away on my second reading of this book, and I entered fully into Kimball's created world and her characters' lives. I hope to be able to persuade many Dog Ears Books customers to do the same.

So now, is it too much to say now, after reading and re-reading both Kimball’s A Good High Place and Lystra’s Season of Water and Ice, that I am high on Switchgrass Books? Top-quality writing, focus on the Midwest, offered in attractive binding with beautiful covers at very reasonable prices ($13.95 is a howling bargain for this kind of package): this is a bookseller's dream.
Posted by P. J. Grath at 12:17 PM

I have been leery of this book, but I finally read it. It's interesting that you wrote, about one of its themes, "At the beginning of a relationship, those who will become friends sometimes have to overcome initial antipathy toward one another, and along the way, as each one experiences and perceives a different subjective world, there will be further opportunities for misunderstanding and hard feelings. . ."

That pretty much sums up my feelings about the book itself. But I'm pretty sure we ended up friends. Pretty sure.

You know (because I wrote it here!) that my initial foray into this book was cautious. It did win me over. I went back and read it a second time, with my defenses down, and was very glad I did. A good book always deserves another reading, anyway, right?