Still, in Retrospect, Overwhelmed and Gratified 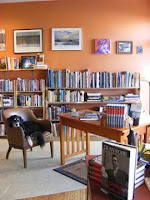 The event on Saturday, October 9, was planned to be two hours long, from 6 to 8 p.m., but people began arriving as early as 5 p.m. Some had mistaken the time, while others simply hoped that the guest of honor would also arrive early so that they could purchase a book, have him sign it and get on to dinner in Leland or Traverse City or get back home to the televised MSU/UM game. An entirely different crowd came late--after the game--and stayed later. Never have I heard the words “football game” so often in such a short space of time! (When worrying about possible conflicts, football had never entered my sports-naive mind. Live and learn!) So basically, Saturday’s became a marathon four-hour book signing at Dog Ears Books, but it all turned our great. Wish you all could have been with us! 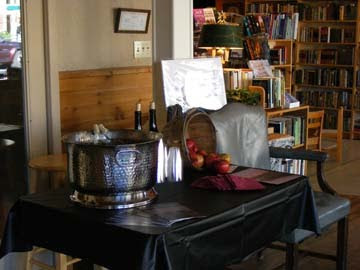 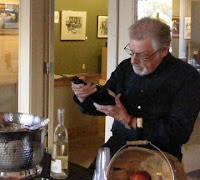 Margaret Bell of Circa Estate Winery had planned to be with us to pour wine, but the winery was short one staff person on Saturday, and with the glorious perfection of this year’s fall weather they were jammed to the rafters over on Horn Road, as everywhere else, and Margaret couldn’t get away, hence David Grath’s fulfillment of the role of emergency bookstore sommelier. Bless the versatile artist’s heart! Interesting and delightful hors d’oeuvres (the most surprising to our guests were the miniature boiled blue potatoes stuffed with cream cheese) came from Northport caterer David Chrobak. 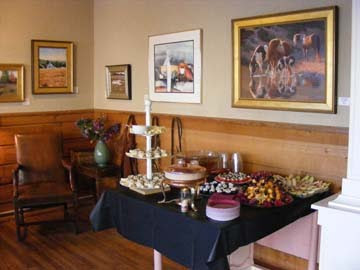 So we had food and wine and books for the early birds, but they had to wait for the guest of honor. Dean Robb arrived precisely on the stroke of six o’clock, not a minute before or after. (How’d he do that?) I went right to work selling books, Dean went to work signing, David went to work pouring wine, and none of us had much time for a break before 8:30 when things slowed down, and even then it was nine o’clock before we put the party to bed, closing the door at last and turning out the lights. Other people undoubtedly took more and better photographs than I managed to get, unable to get far from my post behind the counter to capture other perspectives. 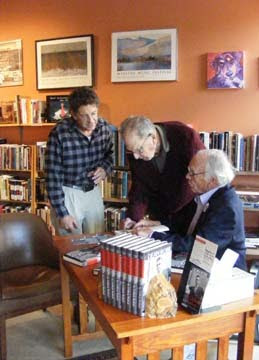 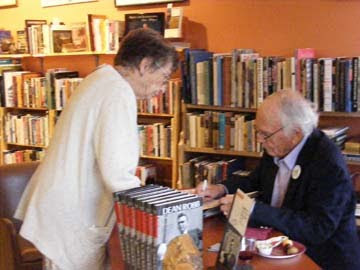 By any measure, though, it was a highly successful event. I could not have asked for more beautiful weather. Then--numbers of people attending, books sold, refreshments consumed, happy faces and compliments galore—it was everything I wanted it to be, and I’ll be reliving the event for a long time to come. People came from Leland, Suttons Bay, Cedar and Traverse City, as well as Northport, among them a handful who had never been in the bookstore before. So many hugs, so much laughter!

Author of the Dean Robb: An Unlikely Radical and Dean’s youngest son, Matthew Robb, called from Detroit halfway through the evening, a call planned earlier in the day, and the only glitch of the whole evening as far as I’m aware was our not being able to get the speaker phone working so that everyone in the room could hear Matt’s voice. (We should have had a second dry run after one brief, elusive success earlier in the day.) Still, his father relayed the other side of the conversation, and when he read aloud Matt’s introduction to the book, a moving tribute from son to father, there was hardly a dry eye in the house. 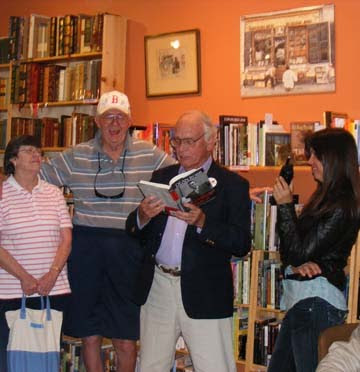 “How do you think it went? Are you happy with it?” Dean asked me around 8:30, a trifle anxiously. We had sold two cases of books and broken into the third. He asked if this was customary (“about what you usually do?”), and when I told him that a more usual number of books sold at a signing was between five and 15 (this is all new to him) he began to realize that it had been no ordinary bookstore evening. 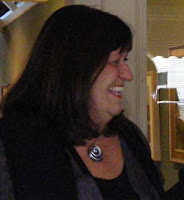 There were many people who contributed to the success of Saturday’s event. I haven’t even mentioned yet Dean’s wife Cindy and everything she did with arrangements in the weeks ahead of time, none of which even begins to touch on all she did along the way while Dean and Matt were working on the book. Dean’s wife and son will understand, though, when I say that it was Dean himself people turned out to honor. His life, his career, his passion, his dedication to civil rights and to defending and fighting for what he believes in all make him a legend in Leelanau and beyond. So basically, I can’t claim a lot of credit for Saturday night. You want a successful event? Host a legend!

Dean, Cindy, Matt—thank you all from the bottom of my heart for granting me the privilege of throwing a party that meant so much to so many people. It was an honor and a joy, and I’ll never forget it.

Postscript to the evening: A Northport friend returning from Mackinac had driven through crowds at the Apple Festival in Charlevoix, crowds in Petoskey and Traverse City, and as he approached little Northport he was thinking how dark and quiet it would be. Then he turned onto Waukazoo Street and saw cars and people and lights! Surprised, he saw there was some kind of party in the bookstore! “I just had to stop and see what was going on. It looked so great!” Well, it felt great to hear that. It all felt great. What a night!
Posted by P. J. Grath at 7:15 AM

And bravo to Pamela, for widespread and steady promotion of the event, for exquisite planning, and for general overall enthusiasm, which makes people WANT to come to Dog Ears for whatever is going on. Brava, brava!

It's such a joy to read about the evening! I wonder if authors have any idea how much thought and expertise and plain hard work goes into a signing? I suppose they do, as the same is true of the writing part. Still, I admire the way you approach each and every event.

Thanks so much, Susan. I try not to be too annoying with my "steady promotion" of bookstore events!

Gerry, I'm glad you could attend virtually this greatly telescoped version. Hey, instead of a TV tuned to sports, how about instant broadcast of bookstore happenings? Would we have an audience? Probably slightly smaller than football.

Glad your evening was a success! I still smile, remembering your delightful book store. I wish many stop by during these beautiful autumn days.

Thank you, Kathy. It has certainly been one of the most beautiful falls I ever remember Up North.