What's Happening Here and There 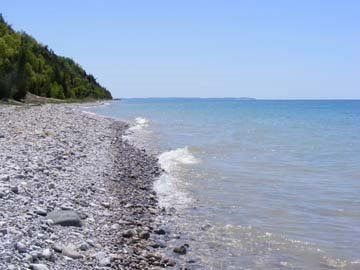 Far from the drumbeat of world events, our fingers hardly on the national power pulse, those of us Up North take note of the world around us in a different way. We’re not ignorant of larger events. Many of us read the New York Times and listen to NPR on a daily basis. Still, it’s the smaller, more immediately enveloping lifeworld (that lovely word of the German philosophers, lebenswelt) that commands most of our attention, e.g., who’s getting married or in the hospital, who just died, who got a new puppy, how does the cherry crop look, where there was frost overnight, whose lilacs are blooming, etc.

Big excitement this week, though, is bears! Yes, black bear sightings in Leelanau County. The Leelanau Enterprise reported three, all in Leland Township, one bear appearing to be making his rounds--the bank and post office--in downtown Leland. Sounds like quite an ordinary citizen, eh? A Leelanau Township friend of ours told us early this week that his neighbor’s bird feeder had been “attacked by a bear” (how did they know? I don’t know), and just a day or two ago David was driving out northwest of Northport and thought he saw a black bear crossing the road. It could have been, he said to qualify his report, a huge black dog, but are there Newfoundlands running free on Garthe Road? I don’t know of any. Then this morning at the bakery I overheard a guy at the other end of the table (I was involved in another conversation and didn’t have a chance to follow up on what I overheard) talking about a bear up in Cherry Home. Can we call this six bear sightings? And would that mean six bears or one bear riding a wide, two-township circuit? The DNR officer quoted in the newspaper estimated the year-round county bear population at twelve to fifteen. I’ve missed them all, even the one back in the mid-nineties that visited downtown Northport. Some people still have sweatshirts commemorating that particular bear, subsequently trapped and relocated.

We did have frost again last night at our place. Will my tomato plants ever get to sleep outside in the garden? So far they have been spending their days outdoors, then coming in to sleep on the porch.

Here’s a little “shop talk” for those who are interested. Book Expo America, BEA, has been going on in New York, but those of us in the hinterlands are no longer left out, thanks to e-mailed newsletters like “Shelf Awareness” and online reports from attendees. Backwoods, backwaters paddler that I am, my vote for favorite panelist goes to poet and novelist Sherman Alexie, who acknowledged that independent booksellers were responsible for his success; that traditionally printed books are more democratic than e-books (“Poor places have very little access [to technology]—still”); that he’s all for “elitist bastards,” as long as they’re elitist bastard booksellers; and that he’s the “the last author whose fiction is not available digitally, a lonely man on an island--I don't know how many of us there are.” I’d love this guy even if he hadn’t come to Traverse City a few years ago as part of a public library speaker series. David couldn’t believe I wanted to arrive so early that evening for what had been billed as a poetry reading. Well, we had to sit over halfway back in the auditorium, and it was standing room only by the time Alexie came onstage. He was no “lonely man on an island” that night! It was one of the few times my husband has ever been speechless.

Another BEA panelist, author James Patterson, whose books account for a dizzying 6.67% of all hardcover books sold, advised independent booksellers to discount bestsellers in order to get some of that market share. I can see it for large independents, but I can’t see it for my little bookshop at the end of an agricultural, retirement and tourist peninsula. People who come to Dog Ears Books for Patterson titles want them used or paperback, and it takes a big volume of bestseller sales to make discounting profitable…which relates to the next interesting item I gleaned from the BEA reports….

This was the big surprise for me: Online book sales account for only 15% of books sold in the U.S.! The largest competitor of independent bookstores isn’t even chain bookstores (30%). It’s general big box stores, with a whopping 45% of new book sales. (I could name store names but refrain out of principle. Why give publicity to those who already have such a huge advantage over me?) Can indie bookstores compete with that market? I don’t know what BEA attendees in general made of the figures, but I’m not going to bang my head against that corporate wall. I can’t get their discounts, can’t buy in their volume, and don’t want—luckily for me, because I couldn’t, anyway--to run that kind of bookstore. Know thyself. Know thy bookstore. Know thy customers. I’m deeply grateful for mine.
Posted by P. J. Grath at 12:15 PM

That last bit--"Know thy customer"--is precisely why I have always valued independent booksellers.

A good bookseller beats an algorithm all hollow at suggesting another book I might like, or letting me know of a bakery where I can get a piece of pie just like the one in the book I just read . . .

And a good bookseller is supreme at suggesting books I might never have considered--books that have value far beyond their sales figures or their reviews.

For one thing, a good bookseller reads.

Sherman Alexie is worth a post on his own. I'm a big fan, even though he irritates me to death. His talent is almost as large as his ego--or maybe his defensive earthworks, I've never been sure. I was at that TC appearance, too, and he was indeed amazing.

Gerry, I have a little something for you and will pop it in the mail as soon as I find an appropriate box. There! Now your curiosity can just simmer in the meantime!