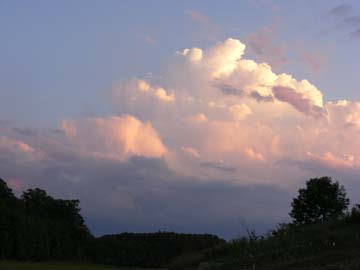 There are plenty of events and activities and plenty of work to fill the dream days. Thursday night was a trip to Interlochen for the annual book sale and to pick up a box of Aaron Stander’s new book, Deer Season, fresh from the printer to the author to the bookseller’s hands. Tomorrow, of course, is the long-awaited book signing with Hillary Porter and her young people’s novel, The Colors of Beech Hill. So, we are busy, busy, busy, but there was still time last night to become lost in the clouds. 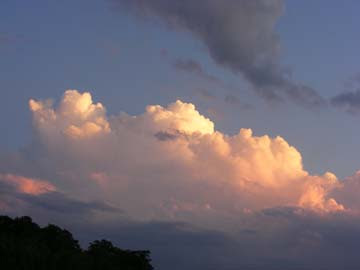 --And now, at the eleventh hour, here's a late-breaking book review from Columbus, Indiana:

The Colors of Beech Hill by Hillary Porter
Reviewed by Liam Greven, Age 12, Columbus, IN

“The main character of this book is a boy named Nick. He is around my age and lives in Northport, Michigan. He is having problems with a bully, which makes him quit his baseball team. To get away he goes to the top of Beech Hill and discovers his sister’s old tree fort. He finds a new kid named Tony there and they become friends very quickly. Also, Nick’s dog Sport plays a big role (which is fun for those of us who like dogs). Tony comes up with a great idea to end his Nick’s problems, and he tells great stories about the place he used to live, Colorado. Throughout the story, Nick deals with some tough situations and some sad ones. You might say that his life has been a bit tragic so far. There are also some political things in it that make it more complicated. I don’t want to give up too much information, though!

“This is an extremely good book that is a little sad, and also happy. It is not a very hard book to read I didn’t think, but it was fun anyway. I would also call it thoughtful, plus it gives a great way to deal with bullies. I enjoyed it very much. You will too!”

Thanks, Liam! Wish you could be here with us tomorrow! 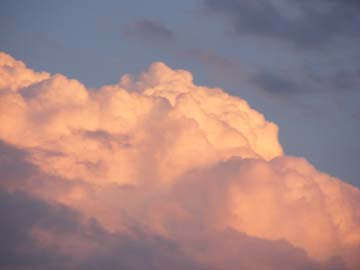 I noticed, too, how substantial the clouds seemed last night. I left the day job at 10, and there was still a lingering glow on the cloud-cliffs facing west. Not sunset-glow, just . . . light.

Didn't know Aaron Stander had a new book out. Shows I've been living in a cave. Must get out more. Must read Deer Season.

What a great reviewer Liam is. Wish I were there today!

Gerry, I sneaked some reading in today--first five chapters of Aaron's new book. It begins in the U.P.

Deborah, I hope Liam sees your comment. I wish you were here, too! David just took Sarah home, and we'll begin setting up soon for the event....