Another Friday already, and summer seems to have arrived at last. My hands were chilly, hanging damp laundry outdoors on the line this morning, but later on, walking from Dog Ears to the Eat Spot, I was too warm in a light denim jacket. Ah-h-h-h! Lilacs are already beginning to fade. That’s a little sad. On the other hand, I’m eager for the Canada anemones down by the creek to flower and will be saying “At last!” when their cheery little faces appear. 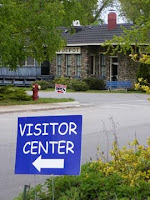 But already we have cheery faces all over town. A summer resident who winters in Kalamazoo said she hardly recognized Northport when she drove into town. There are colorful umbrellas now over the picnic tables at the Drive-Thru BBQ next door, for one thing, and a sweet board fence along the sidewalk. What Bruce Viger did many years ago for Stubb’s, what he did next with the Eat Spot, he’s doing now with the Drive-Thru. What would Northport be without him? 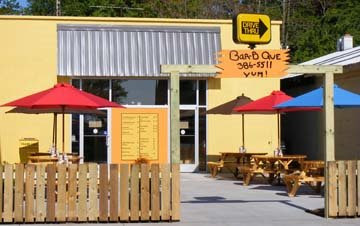 Overnight the flowerboxes in front of the Painted Horse Gallery were filled, so the whole front of our building is blooming now. Large pots of flowers also appeared along the sidewalk by Northport Fitness and on the corner in front of the Filling Station. The bridge over the creek just before Barb’s Bakery and the Willowbrook are bright with flowers, and next door to me, at Funky Mama's, Stephanie is giving all the credit for her flowers to Ben Wetherbee, a summer employee at Northport Nursery, now a branch of S&J Landscaping. 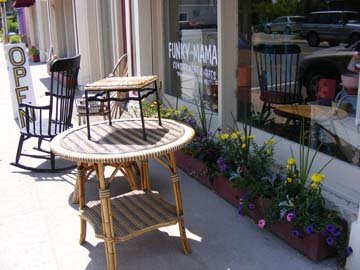 Already it’s almost Father’s Day! If Dad is a reader, I have several recommendations. First—no surprise!—is Doug Stanton’s Horse Soldiers, the tale of a special ops team in Afghanistan. For the scientifically minded dad, there’s Angels and Ages: A Short Book about Darwin, Lincoln and Modern Life, by Adam Gopnik. The dad who likes to cook could use Mario Batali’s Italian Grill or Jerry Minnich’s North Woods Cottage Cookbook, while Robert Olmstead’s novel, Coal Black Horse, will be fascinating fiction reading for Civil War buffs, and Expeditions, a novel by Karl Iagnemma, tells a story of “father and son, religion and science, exploration and exploitation,” set in the nineteenth century in Michigan’s Upper Peninsula. I’ll stop here with the recommendations, only because the possibilities are beginning to overwhelm me. Needless to say, I have many other books that would make wonderful gifts—Barbara Siepker’s Historic Cottages of Glen Lake; Brian Leigh Dunnigan’s A Picturesque Situation: Mackinac Before Photoghraphy, 1815-1960; Michigan Starwatch for the man with his eyes on the heavens; books on fishing; books on dog training; books—books—books! Did I say I was going to stop?

Two weeks from tonight, the stage of the NCAC will be filled with cheery faces and the air filled with song. It’s the spring concert by the Leelanau Children’s Choir and Leelanau Youth Ensemble, directed by Margaret Bell. That’s Friday, July 19, 7:30 p.m. I have tickets here at the bookstore, $15 for adults, $5 for students. Tickets are also available at the NCAC box office.
Posted by P. J. Grath at 10:47 AM

I've found out that Bonnie Black did flower boxes in front of the gallery. Thanks, Bonnie, and happy birthday!