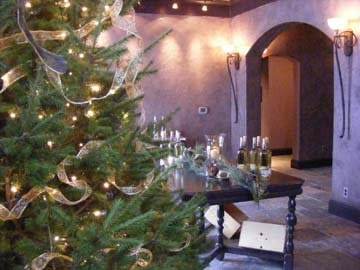 It was the next-to-last day of the Dog Ears Books season, and I’ve extended my December sale through Saturday, January 3, but after Saturday the bookstore will be closed until April. [This post would have been up earlier in the day, but things got too busy. Sorry!] Fischer’s Happy Hour Tavern is already on vacation for the month of January. The Eat Spot is closed for the season. Barb of Barb’s Bakery hasn’t said exactly when they’ll lock up for the winter but probably in a couple of weeks. Meanwhile, Stubb’s Sweetwater Grill and the Treasure Chest soldier on, along with Tom’s Grocery and The Filling Station, abd Sally Coohon will welcome sewers and knitters and quilters and other hobbyists and crafters at Dolls and More all winter, offering warmth and lessons and camaraderie along with goods for sale. In business and the rest of human life, as in nature at large, endings and beginnings overlap, woven together by continuity.

[Spelling has now been corrected in the following section.]

New Year’s Day saw the opening of a new winery in Leelanau County, and since we know the owners and had been fortunate enough to sample one of the new wines before the opening, David and I ventured over the township line to Circa Estate Winery on Horn Road. Margaret Bell is vintner there, her husband David the grower, and anyone acquainted with these two will bring high expectations to Circa. No one will be disappointed. Everything about Circa is top of the line, from gleaming vats in the cellar to a long, sweeping, dark wood bar, grand piano and gracious appointments in the tasting room. All of this, however, is in service to the wine, which, as it should, holds center stage.

Fine wine begins in the vineyard, with grower, vintner and workers nurturing the vines and fruit at every step of their growth. Only half the grape clusters that form are left to mature on the vines, and it is advisable to cut away some of the leaves to let the sun’s warmth reach the grapes, but this must be done carefully and the results closely monitored, because too much light would scald the fruit. Later on the clusters that do not mature must be pruned away. Michigan law permits addition of imported wine or juice, but Margaret Bell will have none of that: every drop of Circa wine is produced from Leelanau County grapes, most of them grown on David Bell’s vines. 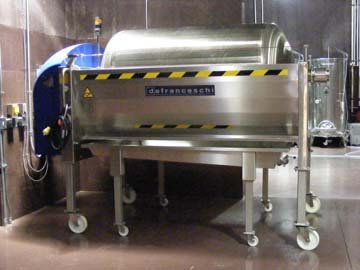 So David delivers harvested grapes to Margaret, and she and her winery staff take over from there. Most wineries de-stem and crush in one operation, but Margaret Bell uses separate operations, and between the de-stemming and crushing, grapes are hand-sorted to insure that no errant stem, twig, leaf or substandard grape is pressed. The press seen above is usually outside but was brought indoors for the opening tour. Behind it, through a tall archway, stainless steel fermentation tanks from Italy gleam. Margaret does not believe in aging white wines in oak—only red. “Do you really want to chew through white wine like a beaver?” is the way she phrases the matter. I would not know how to answer that question except that I have tasted Margaret’s pinot grigio, and the result speaks for itself. 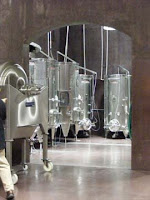 The complicated bottling line itself takes three or four workers to keep things moving along. 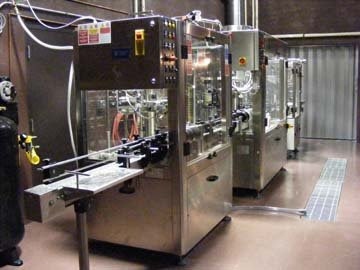 So now let me tell about my first experience with Circa wine. We were at the home of friends, where the Bells were also guests and had brought a bottle of their pinot grigio for us to enjoy and evaluate. For all their knowledge and expertise and high standards, the Bells are as far from being wine snobs as anyone you would want to meet, which is good because neither David nor I could pass ourselves off as wine experts. (When anyone asks, I say that my three grades of wine are Undrinkable, Drinkable, and Really Good.) But what’s important to Margaret Bell is that people be encouraged to taste wine and describe it in their own words, not words put into their mouths by anyone else. Passionate about wine (as about music), she finds joy in sharing her passion and seeks to draw others into the fold, not to exclude anyone.

The bouquet eluded me. Was it too subtle for my untrained nose, or did I not sufficiently warm the glass with my hands to release it? I’ll take more time with that in future. But my first sip more than made up for anything I missed in aroma. It was only the smallest sip, and it was the most interesting, most complex wine experience of my life, modulating ceaselessly on my tongue, claiming my full attention as wine never had before. I was reminded of the first time I saw the modern dance group, Wellspring, perform in Kalamazoo. Here was something that captivated me utterly and took me to places I had never been before but for which I had no vocabulary. How does one talk about dance? It is not literature or philosophy or even painting. (I say “even” painting because anything I have to say about painting is from the heart and with bits I have gleaned through life from David and artist friends, not from formal study.) How does one describe the taste of wine? Margaret did not disdain my inarticulate appreciation. It is part of her nature to encourage novices. 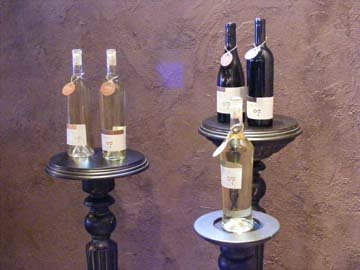 Back to that first of glass. Never have I taken so long to drink a single glass of wine. It wasn’t only the first sip that had so much to say—in a language I am now, because of it, eager to learn to translate—but each successive sip. And I did sip that entire glass, very slowly, falling away from the general conversation to focus on the discoveries my mouth was making. This, finally, is my story: one in which words fail me. But really, what difference would it make if I could produce dozens of adjectives? Words would not give any reader my experience. So now I look forward to the visitors we will have in the spring and summer and fall, because we can take a few of my beloved back roads over to this new winery, where they will have for themselves an experience they will never forget.

This Saturday evening it is David and Margaret’s daughter, Gillian Bell, who will take center stage at the Suttons Bay Congregational Church, 7:30 p.m. Gillian now lives and works in New York City but came home for the holidays (and the winery opening) and will present the annual recital so many of us count on as part of beginning each new year. No tickets are necessary. Don’t miss this!

Well, things were lively in Lake Leelanau on New Year’s Day, with NJ’s open and busy, and in Leland, where the Bluebird and the Merc were drawing big crowds, but back where the old sheriff’s department, jail and courthouse used to stand in Leland the music had died. All these county operations are housed off M-204 now, and the old sign for the designated smoking area, next to a snow-covered picnic table, was finding no takers. When we lived next door, I loved the lights on the Christmas tree outside the courthouse building this time of year. Now there is nothing but rubble. 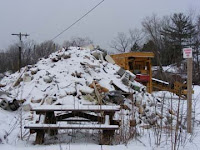 To everything there is a season, and in every season both beginnings and endings are found.

I am currently reading Timbuktu, by Paul Auster, and The Manor, by Isaac Bashevis Singer.
Posted by P. J. Grath at 8:28 AM

Your local businesses have some great-sounding names! Dog Ears Books is brilliant, and I love the sound of Stubb's Sweetwater Grill.

I'm not a prolific wine drinker, but I go through that kind of ecstatic savouring experience with mushroom soup!

I've put your blog on my 'First Class Blogs I like to read' list, if that's OK with you?

We also have the Northport Bay Dog and Cat Company, where I took Sarah today to have her little paw fur trimmed up. Her white socks are now neat and tidy again.

I'm honored that you have put my blog on your list. You are probably my first giraffe reader. I'll be cutting back to once-a-week blogging very soon but will try to make up for the drop in frequency with lots of fresh material.

What? Pamela on vacation!
(You'll miss the Northport Winterfest in Feb.)
We'll miss you.
Don't forget the postcards.
Bill & Sally

Bill and Sally, you will get your share of postcards, but I'm not calling it "vacation." I'm calling it "working on other projects," one of which is writing. My goal is 14 new draft chapters (to put with seven old draft chapters) by the time we come back. But it will certainly be a vacation from snow and ice and answering the telephone, and that will be very relaxing.

I love Bill's wine grades! Should have expected something like that from him.

I am always anxious to try a new winery's wines. Michigan makes some very good wines. By the way, the grape you mentioned in Pinot Gris (French) and Pinot Grigio in Italian (not Pinot Grigiot). Being a book person I thought you would want to be corrected.

Thanks for setting me straight on the spelling. Let's hope the question of wineries being able to ship wine gets straightened out. Our county economy is holding its breath.

I'm glad to hear that Circa opened on schedule. With our packing to head back home we didn't make the trek out on Thursday to see if they had or not. I can only hope they'll still have some of that Pinot Grigio left when we visit Northport this summer.

Best wishes for your time away on other projects, and I hope you find some nice places for Sarah to play.

Walt, I asked Margaret if a couple from Woodstock had been by, but they said no one had identified themselves that way, so I guessed you hadn't made it. Don't worry--Margaret and David are already planning for the distant future when the next generation takes over the business! They plan to be around for a long, long time.

I wanted to spend more time with you in the bookstore while we were in Northport, but my cold made getting up and leaving the house a matter for serious consideration. I was there with you in thought while I curled up on the bed and read. Looking forward to returning to Northport in warmer weather and better health. Enjoy Florida. There is much to love.

Marjorie, you've given me an idea for the Imaginary Bookstore in Northport (don't have room at Dog Ears): couches scattered throughout the store, like those in Shakespeare & Co. in Paris, where friends, browsers and customers low on energy can curl up and read on the premises! Sorry about your cold and that you missed the Circa opening, but it will be spring again before we know it (almost). Hope your New York State winter goes well, too. Wishing you good health, happiness and prosperity--.