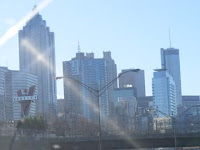 We circled Atlanta this morning on I-75 and exited onto Hwy. 19, our road for the day. Traffic was so light it was almost nonexistent—nice for us, not all that good for businesses in the little towns along the way. I don’t get it. Why would people pound down the expressway, playing deadly dodge-‘em with huge trucks, when they could be rolling along on a velvety divided highway, enjoying the scenery? We spotted our first palm trees of the South outside Griffin, Georgia. There were also large, feathery stands of some yellow-green, ferny sort of plant. Bamboo? My heart began to sing at the sight of what I call my “cloud pines,” their graceful shapes towering over shorter trees and burned-over ground, and David and I made noticing and commenting on an architectural style characteristic of Georgia and northern Florida our Appreciation Project for the Day.

There must be a name for this style of house. I suppose it would be called some kind of bungalow. The basic building is a simple square with hipped roof. The four sides of the roof come to a peak over the center of the house. This peak is sometimes flattened rather than pointed and may support a widow’s walk at its summit. There may be a porch on one or more sides of the house, sometimes wrapping the entire bungalow, and there may be additions to the square, either symmetrical or not. Whatever the variations on the basic classic style, every example I have ever seen has had a welcoming, sheltering, generous look, and such a house is particularly charming when surrounded by a pecan grove, the stately trees spaced wide enough apart to form a series of graceful allées. 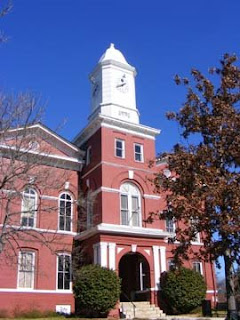 These appealing houses (sorry I was too busy appreciating them to use my camera), the cloud pines, herds of cattle taking their ease under the Georgia sun (apparently untroubled by cold), and finally a quiet red dirt road where Sarah could stretch her legs—but before that, and long before Americus (which I’ll have to save for another post), we hit the jackpot in Zebulon, Georgia, county seat of Pike County, both the county and the town named for Zebulon Pike, famous American explorer of rivers and mountains. Coming into town, David pulled over to park across from the courthouse, and I could hardly believe my eyes when I saw a bookstore just ahead on our side of the street. It wasn’t just any bookstore, either, but a big, beautiful, exciting bookstore, featuring new and used books, rural Georgia photography, coffee and a young but fascinating history. 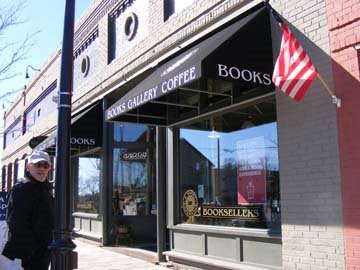 A Novel Experience has been in business for three years and has three owners, Chris (whom we met), Karen and Susan. Before the building could house a bookstore, however, it needed a roof. For seven years, the building at 426 Thomaston Street, with its dirt floor, had stood open to the rain. It took a lot of vision to see a potential bookstore on that site, but Zebulon has a lot of can-do citizens, and a re-development grant from the state of Georgia through the Downtown Development Authority made loan money available to buy the block, one side of Courthouse Square. A restaurant, an office center and the Chamber of Commerce now share that side of Courthouse Square with A Novel Experience.

We were excited, however, long before we heard anything of the building’s history, because this bookstore is gorgeous. The space is so large (like Amy in Little Women, envying girls with nice noses, I always envy booksellers with huge spaces!) that there is plenty of room for a number of cozy nooks—one for the children’s corner, another for coffee, a lovely area in back like a parlor, complete with fireplace. David and I were like kids in a candy store. 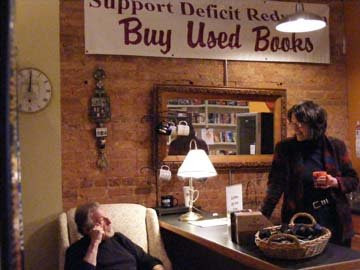 Here are three shelves, each with the name of one of the booksellers on it, the books on that shelf being that woman’s recommendations.

And here is a close-up of the soulful wall treatment. Nothing fake here: this is what had to be done unless the wall were to be covered up, and that would have been a shame, wouldn’t it? 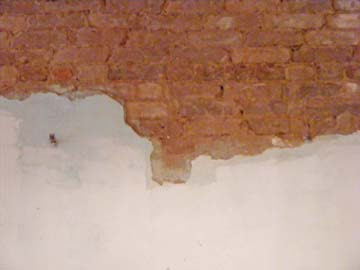 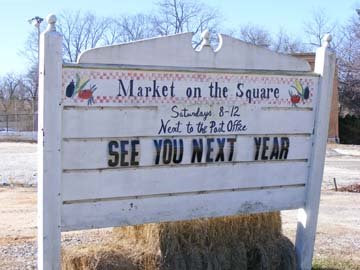 Chris, a psychotherapist in her other job, is also a horsewoman. She is also active in the Chamber of Commerce and in local agribusiness (her term). Pike County is positioning itself as a major organic grower. Thus the sign down the street advertising a seasonal farmers’ market. 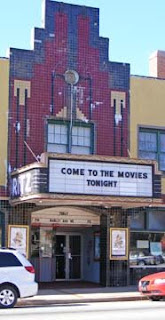 Down the road in Thomaston, county seat of Upson County, where we had lunch at English’s Café (homemade chicken-pecan salad on toasted wheat) and I photographed this sweet little old theatre, happy to see that it is still in business (currently showing “Marley and Me”), we met a couple from Indiana. They had just come from Americus, our destination for the day, and we traded recommendations. They sent us to the café we will visit tomorrow, and we sent them to A Novel Experience.

As we continued south from Thomaston, David exclaimed with great satisfaction, “Now this is traveling!” Amen!

Loving your news from the road!

Glad you are enjoying the bulletins. We are seeing so much that I've had a lot to write about, but once we get settled I won't keep posting every day--though I have already enough for two more posts with pictures. No, three! More from the bookstore in Zebulon, pictures from Habitat for Humanity's Global Village, and pictures of the Georgia house style I love. And now we are in Florida, where there's a whole new palette to choose from. Phew!