A Start to Catching Up

Days after the fact, still euphoric from the inauguration, I'm starting the catch-up game with our trip. 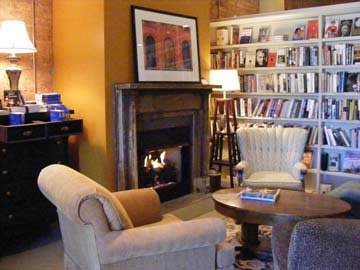 This was one of the most inviting of my pictures from A Novel Experience in Zebulon, Georgia, and somehow I missed it in the post with that story. Also missing that day were any photographs of the house style I was trying to describe (I also forgot to include the possibility of dormers as a variation on the theme), so below are some examples. Former President Jimmy Carter’s boyhood home outside Plains is in this style, also. 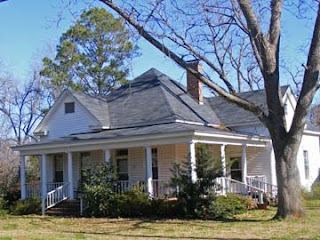 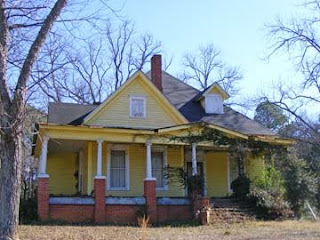 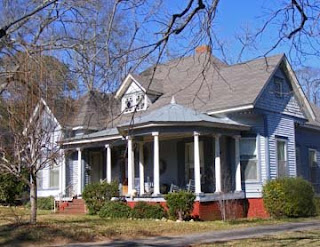 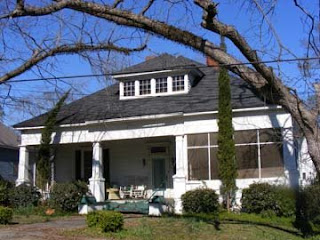 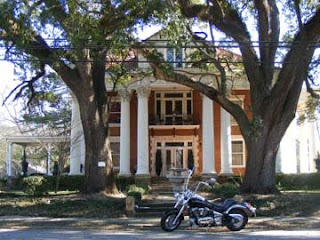 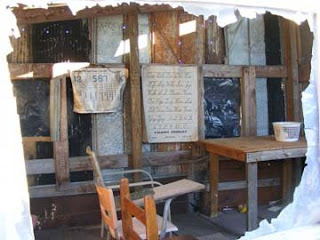 Arriving in Americus, Georgia, in time to visit the on Habitat for Humanity Global Village last riday afternoon, we gave ourselves the self-guided outdoor visit, winding first through a narrow, winding recreation of a street through a typical Third World slum (the image here shows a slum school room as seen through a broken window) and then out into a series of Habitat-built family houses, their style and materials varying according to country. (Children taking the tour can have a “passport” stamped in each house, i.e., country, they visit.) When we reached the house built in Botswana, with its bright blue trim, I was happy to recognize from my reading the reason for the color: blue is the color of the national flag of Botswana, and people there often paint the doors of their houses blue out of national pride. (This, I confess, I learned in the Alexander McCall Smith novels featuring the lady detective, Mma Ramotswe.) The cost of sponsoring a Habitat house like this in Botswana, where nearly half the population lives in poverty and unemployment can reach 40 percent, is only $4,100. Cost in other foreign countries ranges from below $3,000 to over $12,000; Habitat houses in the United States would obviously be more expensive to build. 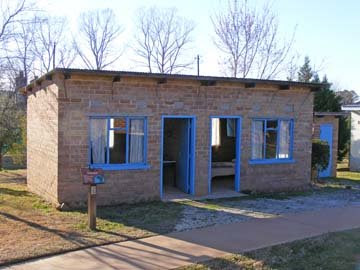 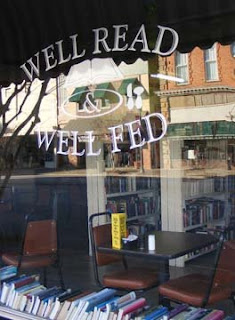 Next morning in downtown Americus, a little before nine o’clock, the café-bookstore called Well Read and Well Fed frustrated us with a vision through the windows of books and tables and a sign on the door saying the place would not be open until ten o’clock, so we got a coffee to go at a gas station and took the road toward Plains. The young woman working in the gas station, I noticed, switched back and forth from English to Spanish as if both were native languages for her, and for some reason that made me very happy and made up for the disappointment downtown. Eight miles out of Americus, we found the Plains Trading Post, one of our regular stops, open for business and visited a while with Philip, the proprietor, buying peanuts, gospel tapes and postcards before heading over for breakfast at Mom’s Kitchen, where we’ve had Sunday dinner on our other three visits to Plains. This time, at Saturday breakfast, we were told that if we were to stay over, Jimmy would be teaching Sunday School in the morning, as usual, before leaving for the inauguration in Washington, and we could have our picture taken with him. I asked if people in Plains would be getting together to watch the inauguration, and it was as I thought it would be: the old auditorium in the former high school, the school Carter attended and which is now a museum, would be the official gathering place on Tuesday. What a great place to be! (In some ways even better than Washington, I couldn’t help thinking. My heart is always at home in a small town, and I have a particular affection for Plains.) We had been on the road for a week already, however, and, many motels down the line from Michigan, were still miles from our Florida destination. Staying through Tuesday would have meant four more motel nights and restaurant dinners. So….

So on we went, approaching Suwannee by sunset, by nightfall sharing a dinner of fresh-caught fish with friends, and the next day enjoying 65-degree temperatures while strolling through flea markets, buying fresh tomatoes and grapefruits, a cap for me and a toy for Sarah.

Sarah can’t get over the exciting smells—first Georgia, now Florida. When David and I watch a movie set in a foreign country, he often says to me, “We’re someplace else!” As I read Sarah’s mind today, that’s what she seems to be thinking.
Posted by P. J. Grath at 4:20 PM