A Correction and Some Old Oddities, on the Last Bookstore Day of the Season

I stand corrected--specifically, on my spelling of a wine grape name from yesterday’s post, corrected by an anonymous commenter. (Susan, was that you?) I found two spellings online but should have known better than to trust the Internet, where errors proliferate and where I have now been responsible for spreading this one. How far the former spelling champion has fallen! The correction, however, sent me to Tom Maresca’s book, Mastering Wine, where I am somewhat comforted to read that pinot grigio is not known for a “big aroma.” At least I didn’t get that part wrong. Maybe I need to buy a case in the spring, sear the correct spelling into my brain, and explore the subtlety of the bouquet.

Last night I added books to my Librarything listings (see link at right). Adding only a few at a time, slowly, as the spirit moves me, I find it interesting to see which of my books are shared with other members. So far I have a little disappointment that no one else has listed Memoirs of an Unrepentant Field Geologist; Reading the Landscape; or The Rural Efficiency Guide. I had hoped to find other fans of those wonderful old books, but the titles in my library that have the largest number of other members listing them are better-known books: Wind in the Willows; The Borrowers; Walter Mosley titles; Harlan Hubbard books; The Art of Simple Food, by Alice Waters. This is fine, of course, but has no one else discovered the less-known old oddities?

Here’s one such that came into my hands the other day, Three Tony’s Scrap Books, by Tony Wons, a radio personality during the Great Depression. The books are compilations of “scraps” he collected and that his listeners clipped and mailed in, and I’m especially interested, given the time period, to see if there’s any wisdom there for our current crisis. Here’s something about finances from that old expert, Anonymous:

And here’s a thought articulated by Lord Avebury, who I’m guessing and hoping would be the Lord Avebury also known as Sir John Lubbock, friend of Charles Darwin and author of one of the books in my library, but no citation is given beyond “Lord Avebury” in the book. The thought is:

Rest is not idleness, and to lie sometimes on the grass under the trees on a summer’s day listening to the murmur of the water, or watching the clouds float across the sky, is by no means a waste of time.

That punctuation is not what I would have used, but I fully endorse the sentiment.

It’s the last day in the bookstore, and the Christmas tree has to come down today, but I’ll wait until later in the afternoon to undecorated it, leaving the lights on until the last. In fact, maybe I’ll leave the lights on a few more days, since we’re not leaving town until other tasks are completed, and, as I always maintain, holiday lights in windows or outdoors are very cheery at this time of year. Although at this moment, early afternoon, the sun is shining in Northport!!! 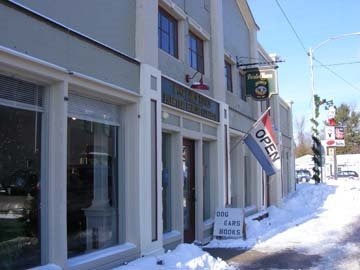 Chateau Chantal has a particularly nice pinot grigio - not overly expensive either. It's priced on their Web site at $13.99.

Have you seen the various adaptations of "The Borrowers" ?

It was our friend Karen from Walloon Lake who first introduced us to pinot grigio years ago, saying it was her "new favorite wine," so it always reminds me of her.

We saw one film version of "The Borrowers" that I did not like at all. What was with the addition of "bad" borrowers to the story? Don't mess with my favorites, I say! I have probably written this before, but when "The Black Stallion" film came out (we saw it long ago in Kalamazoo), I hesitated to see it, having loved the book so very much. Except for the boy playing Alec being so young, though--and I could live with that--I had no complaints about that movie. From the first shot of the black stallion rearing up on his hind legs, I was a captivated 10-year-old all over again.

Loved "Rest is not idleness." Sometimes I tear at what remains of my hair and grouse that "I need time to think!"

Have a safe trip, send us notes, try not to gloat about the Florida weather . . .

I'm trying to remember the movie with the bad borrowers. Was it the old one with Eddie Albert, the one with Ian Holme, or the more recent comedy one with John Goodman?

It was the John Goodman version. Can't remember if I've ever seen the Eddie Albert. Pod, Homily and Arietty are such old friends, though, from the illustrations in the book, that it's hard for me to see them any other way.

Gloat? Gerry, would I gloat? I do hope it won't be as cold for us on the Gulf Coast as it was three years ago (our last time there), when the thermometer plunged below freezing, half of our friends' supposedly perennial garden died, and we had to make an emergency shopping trip to buy space heaters to huddle around in the evening. That went on for a while, and then it rained for a week. There was, however, no ice and no snow, and we had no set schedule to meet.

I thought the 1970's Hallmark "Borrowers" adaptation was so close to the book. The later one (BBC or TNT?) was pretty close too.

The Goodman one is basically a merger between the first Borrowers book and a "Home Alone" style plot of slapstick to hold off a home invasion (with a little bit of Toy Story)... but I like it. I figured that there had already been "True" adaptations, so why not wing it a little? I tend to always like Goodman's acting work, and the Borrower characters were well played, with some ingenious and clever production design for their clothes and housing and artifacts. I thought it was kind of clever that the human family that the Clocks borrowed from had the surname of "Lender".

I think it is fun if you don't mind them bending the story a lot. It's not like it hasn't been played to the book already. Twice.

I am sure I'd feel differently about the Goodman movie if there weren't already true-to-the-book versions.

I recently bought a copy of the old Eddie Albert version. I think it is in the public domain now.

Oh my - I hope you have more seasonable weather this year. The nice thing about being from Michigan is knowing the true meaning of the word "layers." I know you'll have a great time no matter what tantrums Mama Nature decides to throw. Good reading, good writing, good painting, good walks - and good suppers!