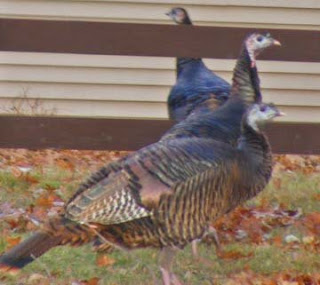 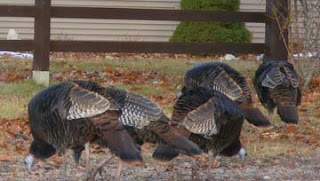 These wild turkeys have nothing to do with my morning thoughts, but I spied the flock wandering around Northport the day after Thanksgiving, too late to post them for the holiday, and they’ve been hanging out on my desktop ever since, waiting their turn on the blog.

Luxuriating beneath the covers for the second snowy morning in a row, my mind drifting from one thing to another until it reached Mackinac Island, I found myself asking, “How did I get here?” Then a reconstruction: I had begun by reminding myself of the new Bill Moyers book. This brought to mind a weekend philosophy conference (1994?) at the Aspen Institute, with Moyers scheduled as moderator. He could not attend, due to illness, a great disappointment to me, but the conference itself was a glimpse into another world for me. About a dozen graduate students, of whom I was one, had our expenses paid by the Institute. The only other female grad student was a young, beautiful, brilliant rabbi’s daughter. All the males were clean-scrubbed conservative Catholics, natural law adherents. “Law all the way down,” one of them affirmed. I couldn’t resist teasing him a little: “I thought it was turtles.” This memory brought in its train the wonderful turtle sculpture on Mackinac Island….

One of the young Catholic men, learning of my love for Bergson, loaned me Maritain’s book on Bergson. (It did not tempt me to transfer my allegiance.) This memory led me to reflect for the –nth time on Bergson’s treatment of Xeno’s paradoxes. Bergson’s basic insight was that the paradox is not in reality but in the intellect’s analysis of reality. (We know, after all, that the arrow does reach the target, whatever the paradox has to say about the impossibility of this result.) His second insight: intelligence leads us astray when we apply it outside its area of expertise, which is inherently practical. Thus the paradoxes and conundrums that result from metaphysical inquiry.

Oh, no, not more philosophy! Very well, then, how about chocolate? There is a wonderfully simple recipe on the Baker’s baking chocolate box for Chewy Chocolate Drops. I will not reproduce it here but will suggest an addition, one I have not yet tried: chopped dried cherries. Chewy Chocolate Cherry Drops! That may be the best idea I had in my morning musings.

I feel compelled to thank all those who contributed to a magical Saturday night in Northport. After spending an afternoon in our chicken coop (albeit somewhat more than a shelter for fowl), with the wind whipping snow around our little red building and our new (well actually old – but recycled) little wood burner bringing us and some friends warmth for the first time, we hurried down to the village to participate in the annual Christmas Tree lighting. It was an evening only duplicated in childhood storybooks. The music, the people, the hot cider and Christmas cookies followed by the warmth of the shop owners inviting everyone in for more holiday-inspired goodies, made for one of those evenings you think can only happen in one’s imagination.

To top off the evening, we ended the Northport experience celebrating the generosity of a local bookshop keeper and her artist husband. An antique bit of history that used to grace their home will now complete the wood burner experience in our little coop. Thanks to all for the marvelous evening.

Z, it was great to see you two on tree-lighting night. Yes, Northport does magic well. As for the old cast iron kettle, keep it on the woodstove, filled with water, to humidify the winter air in your coop. We will enjoy thinking of it in such an appropriate new home.