Here and Now, Our Time in the Sun

In a recent post with my annotated list of books read in previous weeks, included was Jane Barry’s A Time in the Sun, set right here (i.e., where I am at present) in Cochise County, Arizona. When I finished the novel, I passed it along to a neighbor (who is now captivated as I was by all the familiar locales in Barry’s historical novel), so I can’t look this morning to see where the title appears in the story, but I remember it was near the end. The idea is that all of us alive have our time in the sun, limited by mortality.

As the end of the year (with more holidays) approaches, I’ve been reading old journal entries from a year and two years ago and am struck, despite all the COVID and political horrors, by the happiness the Artist and I found in our most ordinary days, and I think what a blessing it was that we could not then see into the future. The love of my life is gone now, along with our last two beloved dogs -- a long-established pack and a pack with only a brief history -- but we did all have time together in the sun. And now it’s Sunny’s turn. 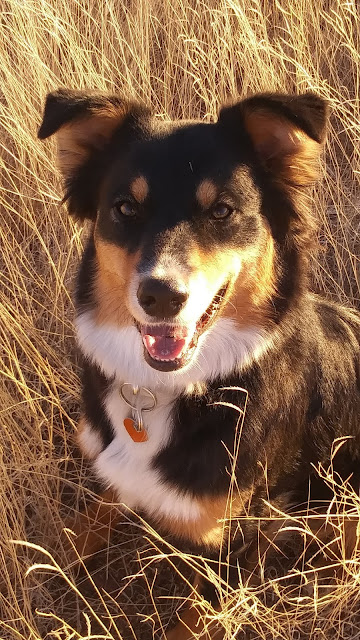 Sunny Juliet and I go out for a ramble on the range most mornings, joining a neighbor and her dog. The year-round resident canine is Boss Dog, Sunny the teasing youngster who sometimes needs to be reminded of her place, but in general they get along well, so while SJ and I also take walks on our own, we enjoy most of all being part of a ghost town foursome. 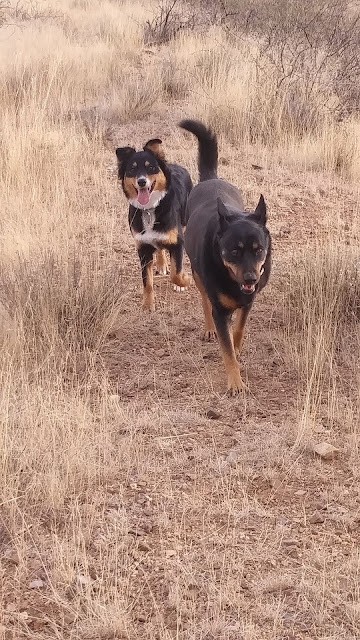 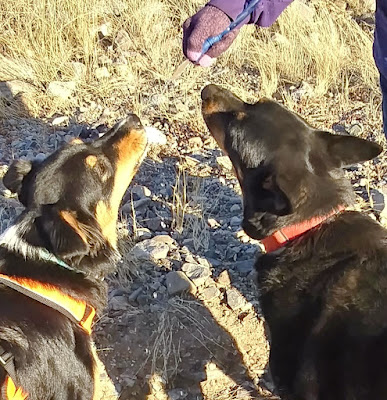 Although I’ve only finished reading three more books since publishing the last list, I’ll add them in here, so as not to fall so far behind until the next time.

122. Caputo, Philip. The Voyage (fiction). Honestly, I probably would not have chosen this book to read except that it was urged on me by a friend – and because both of us had met the author, separately, through another mutual friend who was also a well-known author. That said, this is a must-read novel for sailors, fresh- or saltwater! I am not a sailor, and so the detail of every move the captain and crew made went far, far over my head, but for those who understand it all, the picture would be riveting. The story, anyway, is riveting even for a non-sailor. Three teenage brothers and the friend of the oldest set off from Maine to sail to the Caribbean in the year 1901. The brothers have been seen off, unceremoniously, by their father, who tells them he doesn’t care where they go, except they are not to come home until the end of the summer. The reason for the patriarch’s abrupt dismissal and other family secrets are revealed only gradually in the course of a story of adventure on the high seas. Highly recommended for those who love adventure, mystery, and exotic locales in their reading, and especially for sailors. 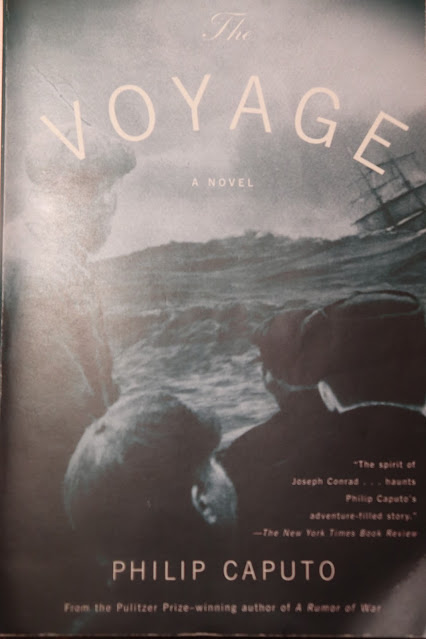 123. Willard, Nancy. Telling Time: Angels, Ancestors, and Stories – Essays on Writing (nonfiction). Serendipity brought this book to my notice. I was browsing in Readers’ Cove, Deming, New Mexico, and bookseller Margaret had just happened to leave Willard’s book on the shelf facing out. “Nancy Willard!” I exclaimed. “She’s a Michigan writer!” Willard was a poet and a storyteller, and these essays are saturated with her gifts, as she writes about teaching, about her mother’s last days, about the couple who illustrated her children’s books, and about storytelling in general. Highly recommended for poets, storytellers, essayists, and anyone who loves and appreciates these literary forms. 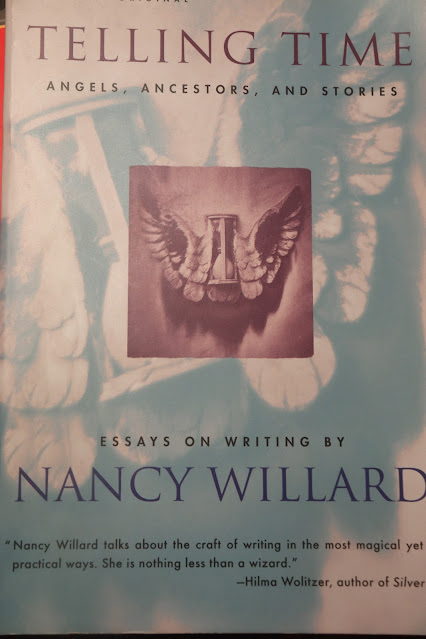 124. Smith, Alexander McCall. Heavenly Date and Other Flirtations (fiction). Stopping in at the Friendly Bookstore in Willcox the other day, I was in the mood for something comforting, and since I am always comforted by reading McCall’s stories featuring Mma Ramotswe, the name “Bulawayo” in the table of contents of short stories in the collection led me to believe that this book would comforting, too. It was not. Publishers Weekly (on the back cover) cited the collection’s “light humor,” but I found it, for the most part, downright bleak. Not that the stories weren’t well written. They simply were not what I expected or wanted them to be. Make up your own mind on this one. 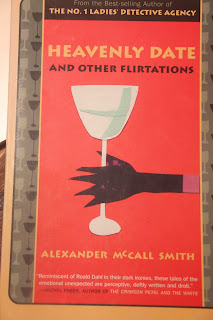 The book I’m reading now is Francisco Cantú’s The Line Becomes a River: Dispatches From the Border, a nonfiction book that anyone with questions and/or an opinion about the border with Mexico should read. His mother is distressed and worried when her son, a recent college graduate, takes a job with the Border Patrol. He explains that in his classes, everything was theory, and he feels he needs to be “on the ground” to understand what’s really going on. You grew up on the border, she tells him, but he says it’s different and that he feels he needs to do this, at least for a while. About halfway through the book now, I am not looking at the last page to see where it ends. (People really do that???). I can tell you, though, that this true story does not loosen its grip on a reader as it moves along…. 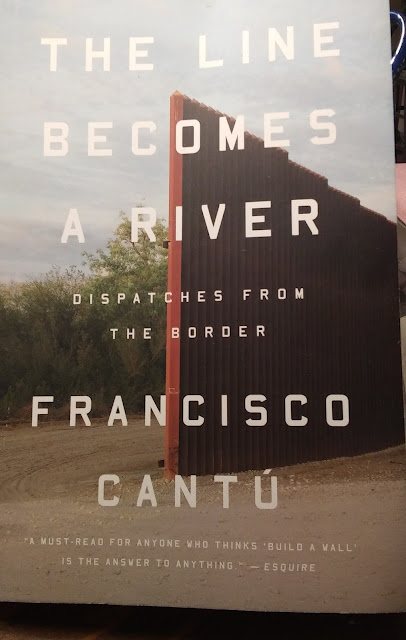 And so goes our life, Sunny Juliet’s and mine, here in the high desert as November 2022 draws to a close. The nights are cold, the days bright and clear. Down toward town, the wind stirs up dust on the playa. The puppy makes me laugh. The sun rises, the sun sets.

I loved the Caputo book, although it's been a while since I read it. So glad you and Sunny are enjoying your time in AZ. And, yes, life goes on.

Sunny makes the most of every moment of fun. She can chill when need be but doesn't let momma retreat from life.

It has been too long since I have gotten to read your essays. It's the first thing I have done for myself since my winter break began. I love catching up, knowing you are back in Arizona. So many books to read and so many shops to visit. I'll be in Tucson (where I was born) next Christmas for the first time in years. Maybe I can find my way down to some of the spots you've mentioned here. I've always wanted to visit Cochise County (because of what I've heard about Bisbee and because of J.A. Jance's novels about Joanna Brady) and the Chiricahua National Monument. Someday..

It's lovely to read about how Sunny Juliet is getting along, as well.
She's just about a year younger than my Poppy Dolores. Have you ever read "Pack of Two: the Intricate Bond Between People and Dogs" by Caroline Knapp? It's the only one I've read that captures how I feel as a woman whose dog is her constant companion. Knapp says, "“What makes you feel empty and what makes you feel full? Who, or what, makes you feel connected or soothed or joyful? How much companionship do you need, and how much solitude? What feels right, what feels like enough? We all have to feel our way through those questions in life, and although she cannot provide the answers for me, I have the sense that Lucille is gently leading me toward them. I pick up that leash; I go forward.”

Thank you for writing about how you go forward.

Suzy, what a lovely surprise to find your comment this morning! Thank you so much! I'm a little confused by "Poppy Dolores" and "Lucille," however. Do you have two dogs?

At almost this time last year, when we had to say good-by to our poor, dear little Peasy, my husband said to me, "I can't live without you, and you can't live without a dog, so we need a dog!" Eventually that search brought me Sunny, and I don't know what I would have done without her this past year. I would have been even more lost than I sometimes have been, anyway. And now I am assisting a friend and neighbor on a puppy search of her own, because I understand so well the need for a constant, loyal companion.

Yes, I have read Knapp's PACK OF TWO. And in fact, Sunny Juliet is telling me right now that it's about time to get out that leash (I carry it in my pocket) and get out on the range! The sun is almost up!

Thanks again for this lovely morning note.

Suzy, sorry for my confusion above! Of course, Lucille was Knapp's dog, and your girl is Poppy Dolores! I must not have been fully awake yet when I read your comment. Now, after a 3-mile hike, my head is clear. :)