I am Pierre’s dog.

David, a.k.a. the Artist, took me to a new coffee house in Willcox, and we sat out on the front porch on Haskell Street (Business I-10) with our drinks. When I was in graduate school and reading Sartre, I wrote a paper called “Consciousness of Self and Pierre’s Dog.” Or maybe it was “Pierre’s Dog and Consciousness of Self.” The first line, anyway, was “Consider the dog in this café,” my variation on Sartre’s famous “Consider the waiter in this café.” In my version, Pierre’s dog was called that because, while Pierre did not own the dog, he and the dog had fixed morning routines in the café every day. Then comes a morning when Pierre does not appear, and everywhere the dog looks, all he sees is Pierre’s absence.

As for reading, I haven’t finished a book since we were in Michigan, and that last book I read was Rinker Buck’s The Oregon Trail, which I left in Illinois (our second night out on the road) for my sister and brother-in-law to read. I tried to finish Absalom, Absalom! for a Zoom meeting with the reading circle but couldn’t manage to lock myself for long enough into that depressing, claustrophobic atmosphere to get through the last third of the book. Instead, while traveling and during our first days and nights here in the cabin, I read now and then a few pages of SPQR: A History of Ancient Rome, but my progress in it was slow, my attention repeatedly drawn away from the book to our dog’s unaccustomed demeanor.

Then Sarah had a good day on Sunday, and I felt briefly optimistic that she would “recover from the trip,” as the Artist put it, and that we would have – not long hikes, but at least one more short walk with our neighborhood adventure pack before I had to leave her home on mornings I went off into the mountains with them. So on Monday and Tuesday of last week, which is to say during Sarah’s last days, I started into my winter writing project. 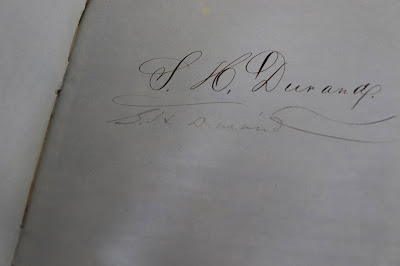 The following Tuesday, on what turned out to be her last day of life, I only “left” her briefly (we were scant feet apart and could look into each other’s faces whenever either of us had the desire) to sit with the handwritten diary that a young man in Pennsylvania began in 1854, a diary I will be transcribing this winter, putting his entries together with my own journal entries and other thoughts and reflections on his time and mine.

Now that she is gone, I still read myself to sleep after an evening movie but have set aside SPQR for a comfort book, one of Alexander McCall Smith’s novels set in Botswana and featuring Mma Ramotswe. When we wake up in the middle of the night, as we do every night, the Artist and I may talk quietly or lie together in silence, but sometimes then too I turn on my bedside light to escape to Botswana. The cows in the book are comforting. I wish the cows of Dos Cabezas would pay us a visit, but they seem to be grazing and foraging somewhere out of sight.

While I was lying on the floor with Sarah on Tuesday, stroking her head and fondling her ears, a Motown song by Gladys Knight and the Pips came into my head and would not go away, and it has been there ever since. “Neither One of Us Wants to Be the First to Say Goodbye” is a song about a couple postponing a breakup they realize is inevitable. For me, it was about my dog – about Sarah hanging on and about my world having shrunk to wherever she was lying at any given moment. She never did “go to sleep” but kept following us with her eyes whenever we moved from one part of the room to another. She and I did not want to say goodbye to each other – and the Artist and I did not want to say goodbye to her.

My sisters mentioned another song, one called “Sara,” by Jefferson Starship. I put off listening to that one for days after Sarah’s death, and when I finally called it up, the Artist and I could hardly bear the lyrics: “I’ll never find another girl like you…. No time is a good time for goodbye.”

Then the other day I picked up a small collection of poetry, ten poems by ten different poets, put together in a book by Roger Housden called Ten Poems to Say Goodbye. This may be the book I will finally finish and be able to add to my “Books Read 2020” list.

But life goes on, as it always does, and Thanksgiving will be here in two days. The Artist and I have each other! We have priceless family and friends! And we have received a flood of touching and very meaningful sympathy messages from a couple hundred people, many who knew Sarah for years and others in distant places who knew her only through my blog posts. We were unbelievably fortunate to have found puppy Sarah in the first place and then to have had her in our lives for so many years -- the best traveler, the best bookstore dog, and the best companion imaginable.

I am very well aware of how blessed I am, what a wonderful life I have, and there are moments already when the Artist and I can make each other laugh, even over shared memories of Sarah. At the same time, for now, Sarah is my Pierre, and I am her dog: Everywhere I look, I see her absence. 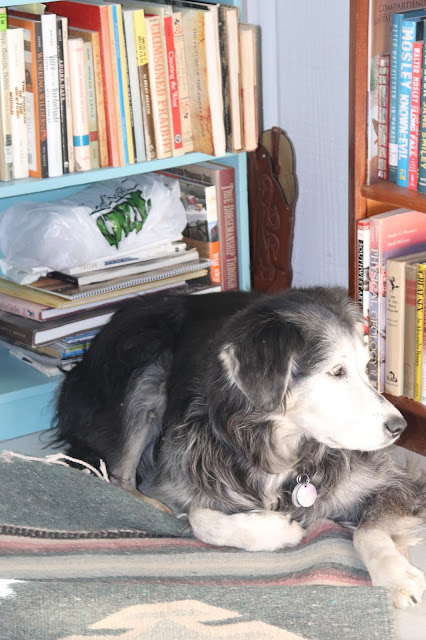 Sara, Smile. It's me and you, together. Smile, by the Hall and Oats. I sent you a video.

Pam, I am so sorry. How painful for all of you. Clearly, she brought joy to many and she had a joyful life with you and David. Thinking of you with sadness. Elaine

A few weeks back, the Mrs. came back with some books that were NOT from the library. A few days later, more books. Upon inquiry, she
said they were from 'And Books Too", a shop on Mainstreet across the
river here in the Lewis Clark Valley. She was so delighted that she
talked me into visiting (the local library is far less interesting than my own) and that the store had a full spectrum of new and used books. I haven't been yet, but knowing your interest in fellow indie book sellers, thought you could add this local place, which has grown very popular as Christmas approaches. The owner, Judi Wutzke and her husband of 51
years, were associated with Washington State U some 40 miles up the road from here. It is interesting that we are a town of retired people, a few large industrial plants and nimrods that spend most of their time in the surrounding mountains, yet this center of literature has been in business since 2010...and growing. Sorry, off
topic PJ, but you book sellers are a Band of Brothers, no?

We are indeed a band of brothers and sisters, Bob, and I'm glad your Mrs. has discovered a local bookstore and is supporting it with her purchases. I looked at their list of authors and would love to see them add Seattle fiction writer Valerie Trueblood. I may be back in the Friendly Bookstore on Monday mornings soon. We stopped by there today, and the Artist told the woman in charge that I "need distraction."