I really didn’t mean to drive all the way from Kalamazoo to Louisiana, Missouri, in a single day. I intended to stop for the night in Illinois, but having missed my exit, and with so much light still left in the sky as evening came on, I too went on. And while fatigue claimed me for its own that night, seeing dawn over the Mississippi River in the morning made the long drive seem worthwhile – and, of course, I was also much closer to my next travel goal: Winfield, Kansas.

Those of you who accompanied me virtually last spring may recall that, despite a little tire trouble (entirely my own fault), Winfield was very good to me. Friendly motel, friendly tow truck driver, friendly and helpful tire shop guy, plus a Chinese restaurant and a terrific dog park. This time I also spotted a bookstore in downtown Winfield, but it was closed when I arrived on Sunday and would not open until Tuesday morning, so I’ll just have to plan my spring return to Michigan with Moonshadow’s schedule in mind.

On the other hand, there was no problem getting to and into the dog park. Sunny would have liked a playmate, but she managed to run around and explore on her own. She is not a puppy to waste an opportunity to play! We did try one playmate, but he was too rough for my young tomboy, so we went back to the separate adjacent area for “large dogs,” leaving the bigger boy in the “small dog” park. 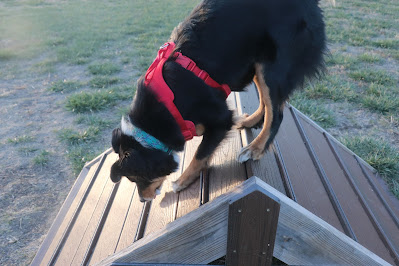 We were awake ridiculously early on Monday, waiting only for dawn to grind the darkness off the morning so we could continue our westward trek (I speak for myself, of course, not for Sunny), and so as soon as it was light enough to see, eagerly and confidently I set my sights on Santa Rosa, New Mexico. It would be a long day, but we were starting out at 7 a.m., so what problem could there be?

I highly recommend the road west of Medicine Lodge. It is stunning. I stayed on U.S. 160 and did not take the scenic drive (partly over dirt back roads), but many of the Gypsum Hills’ red mesas are visible from the highway, and the ribbon of highway itself feels at times like a roller coaster for its many long ups and downs. Frustratingly for someone itching to employ a camera, there is virtually no shoulder to the road whatsoever, so if you want to see the scenery, you’ll have to follow this link. Just think, though, how much gorgeous American scenery has been provided for us by processes of erosion!

Now usually, when the sky grows lighter rather than darker that’s a good sign. Today, however, while angling southwest from Meade toward Liberal, Kansas, the lighter sky I saw ahead meant something else – that I was not outrunning the bad weather by going south but running right into it! So not fair! But you know when truckers have slowed down to 30 mph, driving conditions are pretty bad.

I really wanted to reach Santa Rosa tonight, but after a white-knuckled drive from Meade to Liberal over snow both packed and swirling, slushy and in places downright icy roads, I thought of all the truck traffic always converging upon Dalhart, Texas, and had no heart for unnecessarily braving a vehicular holiday on ice.

The Artist and I once spent three nights instead of the anticipated one in Hastings, Michigan, because of blizzards raging through Barry County, but I’ve never bailed out on a trip at noon and checked into a motel at 2 p.m., planning to stay the rest of the day and the night. Television (Sunny is fascinated by a program about ravens), warm socks, books, snacks. This is survivable. And I am deeply grateful that Sunny Juliet and I don’t have to live in our car!

I love a good road trip, especially with my girl, but it's smart to recognize when to hunker down.

Dawn, I could not have gone any farther under the weather and road conditions that day! Very grateful to land in a familiar town!

Those big trucks scare me…sometimes wiggling on the road and many times taking up a whole lane and more. But you had ice and snow! Yikes! I breathed a sigh of relief when you said that you left the road and found a place to hunker down! Our 11-yr-old Prius gets buffeted around on windy days, and we’ve had ‘weather’ on our drives, but no snow since 2016….we escape to Brazil when that threatens us! 😆

The road and weather and trucks certainly were scary that day, Jeanie! My car is 15 years old but has good tires and brakes (new front brakes for this trip, thanks to Grandson Dave). Some days, though, it just doesn't pay to persevere. Safer to cut one's losses.