On the Road: New Mexico at Last

The scene above, from a photograph taken today, was familiar to me from the first time the Artist and I made the trek from Northport, Michigan, to Dos Cabezas, Arizona. That cold January day in 2015, when we paused with cameras at the Pajarito Rest Area, the wind was fierce, and a worker told me with some amusement that many Northerners, somewhat to their dismay, arrive just in time for the windiest New Mexico season. In my opinion, the views more than made up for the wind. "We're someplace different," the Artist said. He liked to say that.

And if I say, “New Mexico at last!” you can be sure I will also say, a little way down the road, “Santa Rosa! Finally!”

The little town in New Mexico captured my heart in April of 2015, when we stopped to explore on our way back to Michigan, and on every trip thereafter, we stopped at least for a meal in Santa Rosa and often overnight and usually found time to cruise slowly around town to visit again and again our favorite sites.

“We should spend a few days here sometime,” the Artist said. I agreed readily. In the spring, when the water is warm enough for swimming. Maybe find out when a rodeo might be scheduled. Try a couple more restaurants. But “when we have more time” has a way of never arriving, since every sunset subtracts a day from however many any of us may have left, and we never know how many that is to begin with.

Although I had gotten a motel room early on Monday, not wanting to endure any more stress on ice-covered and slippery highways, with more snow still coming down, I didn’t sleep all that well, mostly because Sunny didn’t. She would hear voices in the hall … or outside in the parking lot … and she seemed to feel called upon to bark a warning. Sigh! What a coincidence that Patricia McConnell wrote a post on that very subject on that very day (November 14)! I read the whole article, although, as you might guess, getting a dog to stop barking is a long-term project, even for Patricia McConnell.

The good news was that the roads were clear on Tuesday morning, despite the very cold temperature in Liberal, Kansas: 20 degrees Fahrenheit, down from 50 two days earlier. Slush in the parking lot was frozen, footing treacherous. But we were on the road by 9 o’clock (Kansas time) and knocked off the Oklahoma panhandle in less than an hour. Even Dalhart, Texas, which I had dreaded because of all the giant trucks that converge on that area from all directions, was a snap! Going through Dalhart early in the day must be the secret to making it easy. Coming in at sunset is something you definitely want to avoid.

But then – back to my opening image – came New Mexico. Mountain time. High plains, then mesalands. And because I hadn’t slept well, and because fatigue must be cumulative, and also because the sun was shining and I had time, if only I was willing to take it, I decided to slow down and spend the afternoon and evening in dear little Santa Rosa.

The Artist and I, in our years of traveling together, often – more often than not -- explored without a plan, and that’s what I found myself doing on Tuesday afternoon. River Road. Had we ever been out River Road? Where was the river?

A sign for a fish hatchery caught my eye, inviting me into a parking lot. I thought of the hatchery at Wolf Lake west of Kalamazoo and the one at Thompson in the U.P., where a friend worked before he retired. Does it sound funny to say that fish hatcheries were part of our “love world”? 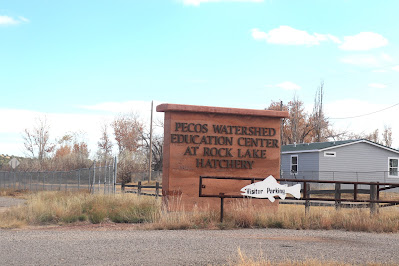 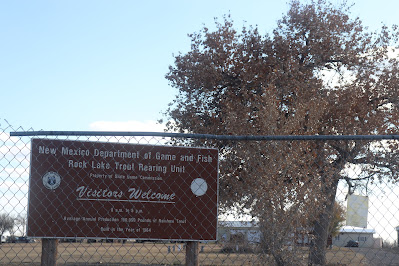 This one turned out to be (as many are) every bit as much education center as hatchery, and it revealed itself to me in stages. First I was drawn to a signboard illustrating birds that one could expect to see. And then to a sort of blind, with viewing windows that framed the scenes beyond to resemble paintings. 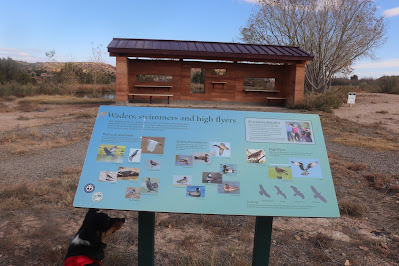 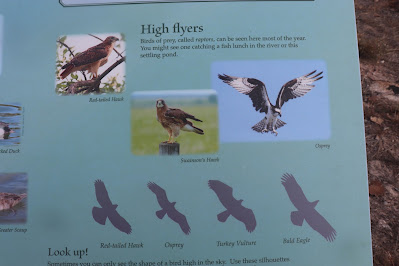 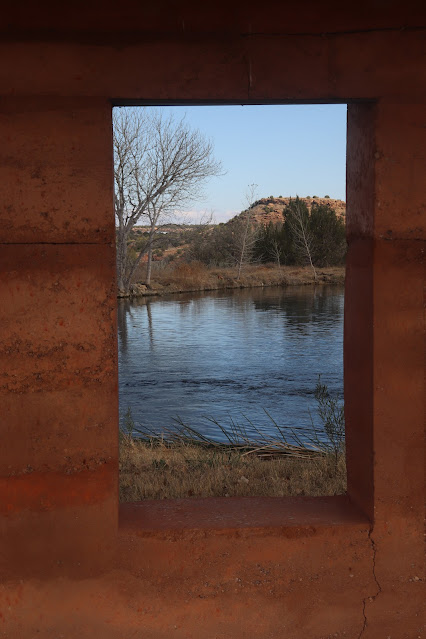 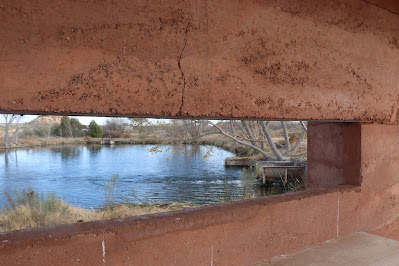 A more elaborate building gave information about the Pecos River watershed. No, I didn’t photograph every display, but the ones below should give you some idea of how well the education component is put together. 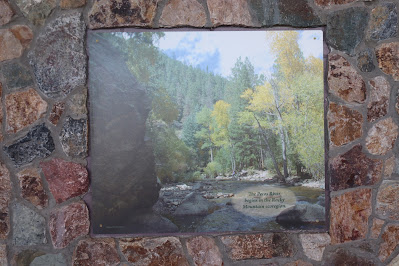 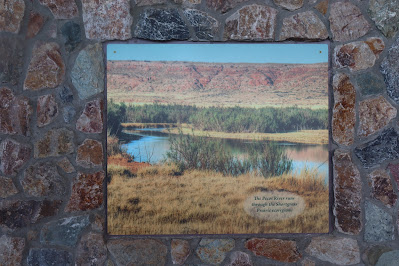 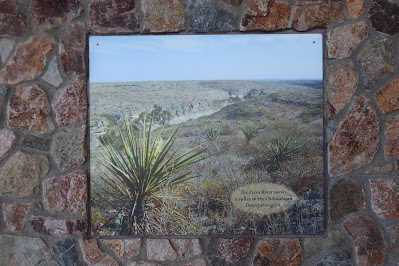 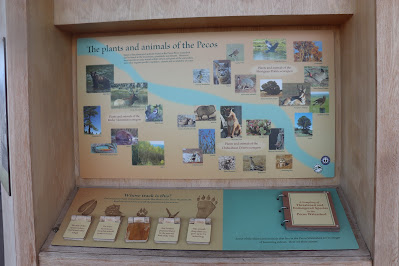 Already impressed and pleased with what I'd found, I noticed a footpath along a fence, and that called to me, as well. Sunny, wearing her new harness, was doing just fine on-leash, so we followed the path. I loved the long overland view, back toward dear little Santa Rosa. 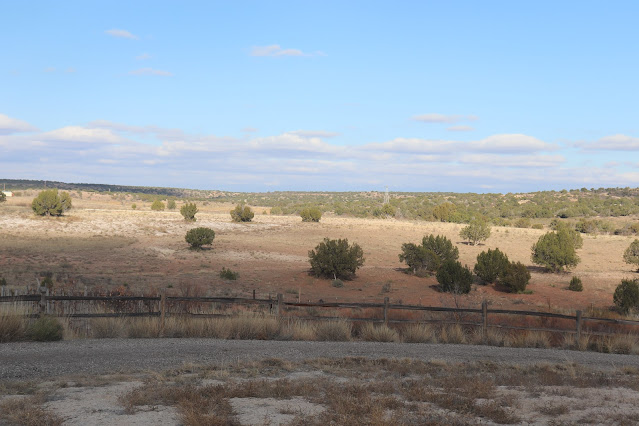 But more awaited. Of course! The Pecos River itself! 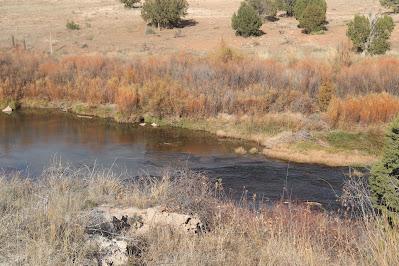 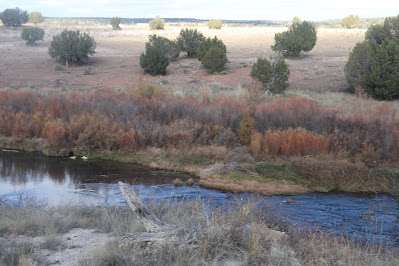 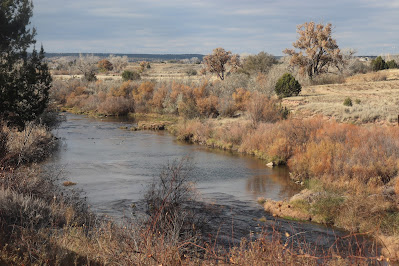 When we encountered a couple of Game and Fish employees clearing brush, Sunny was eager to make friends. The young woman said she had a Great Pyrenees at home, only three days younger than Sunny, and the young man told me his dog, a heeler mix, was only accustomed him and not to anyone else. Although Sunny wanted to jump on these people (we still need to work on that), she was friendly and sociable in a way the two dog-lovers seemed to find quite winsome. 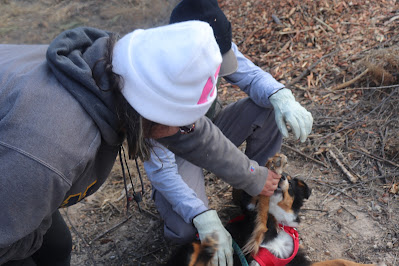 All in all, our afternoon exploring worked out very well – exercise, a social encounter, and beautiful views of a lovely little river. I only wish the Artist, a.k.a. River Rat, could have been there, because he would have loved it all! And nothing is the same without him. 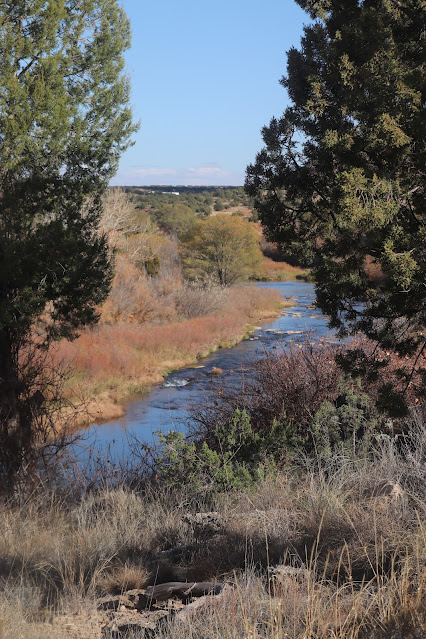 That last line...'nothing is the same without him' breaks my heart. There must be such a sad undertone to all your exploring, especially while exploring places you both always wanted to do. And yet you appreciate the beauty and the interesting things, and the way your dog has learned to walk on a leash. It's all complicated, isn't it.

As an aside, there's someone in my FB wildlife/birding group who often goes to a fish hatchery near Wolf Lake and gets fabulous images....someday I hope to go over there myself. I think you have to get permission to explore there though, not sure.

I don't know why that last line came out bigger. I have a lot of trouble with my fonts since the platform made changes, but usually if I highlight an entire paragraph after editing and then click font size, it all matches. With the last sentence in larger type, it looks as if I'm screaming or wailing or something, so I'm glad you were able to interpret it as an 'undertone,' because that is more what it's like. Especially anything to do with rivers. Especially anything visual. Or funny or surprising or breathtaking. -- A lot of new things and many, many reruns....

The Wolf Lake website makes me think they have done a lot of work there to enlarge and enhance, but there are many little lakes scattered all over the area west of Kalamazoo. When I was there this time, the whole idea of the glaciers and formation of kettle lakes when ice sheets retreated was in my thoughts a lot. David and I did a lot of fishing from little rowboats for a while, and then I realized I didn't care much about the fishing but just enjoyed being out on the water, watching the shoreline, and gazing down into the depths. Very peaceful. I recommend it!

Loved the images around the river area. Such subtle colors. And your stories about a night in a hotel with a dog, I can empathize with. Every creak in the floor, every door opening and shutting, every new sound eliciting a low growl or yip from our canine companion. I admire your courage in taking this first trip without David. Hope you have a good winter.

Thanks, Karen. The trip has been a very mixed bag: beautiful scenery, open roads and easy driving, then horrible traffic, out in the cold to walk the dog on icy slush and through snow when I would much rather have stayed in bed, but grateful for her companionship every mile in the car and every morning away from home.

I hope you are on the mend from your surgery and will have a healthy winter -- and be back at your outdoor photography, too!

Thank you, Pamela. I can't wait to get back outdoors with my camera, even from within my car with Gracie as my passenger. I really need a shot of fresh air soon.