Yes, We Have No Saguaro

My title today may give a chuckle to the few who remember the old song about bananas. I did not see the original cartoon when it came out in 1930 (not that long in the tooth!), but it replayed on 1950s television and was still amusing then. All of which has nothing to do with plants of the high desert, my topic of the day -- .

A friend back in northern Michigan asked about plants here in the high desert, speculating that we “don’t have cactus” here. Well, we have a lot of cholla (though not the full range of varieties), and there is prickly pear, too, more often on higher slopes than down on the range, and also here and there a squat barrel cactus, though these last are not as plentiful here as they are in the low desert. Along our Cochise County roadsides, soaptree yucca is ubiquitous, and down the road apiece from our ghost town are rocky foothills stuck all over like giant pincushions with sotol and century plant (the latter a kind of agave), as well as the striking ocotillo (more common around Benson and Bisbee than here in Dos Cabezas). During our first winter here, it took me a while to sort out yucca, agave, and sotol. But yes, we have no saguaro. That, along with "teddy bear" cholla, grows down in the lower elevation of Tucson, 100 miles away. 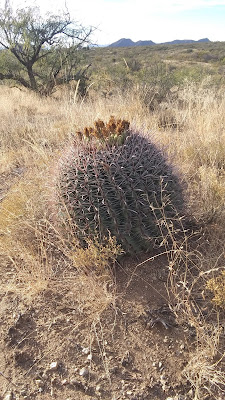 The life cycle of the century plant is interesting, though. It doesn’t really take 100 years to come into bloom (for the one and only time in its life), but it is a long wait. Meanwhile, however, the plant grows larger and larger, making a nice focal point for desert landscaping. 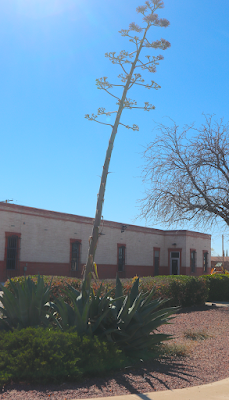 When it reaches maturity, it sends up an immense, asparagus-like stalk (this plant and asparagus are in the same family), and after flowering the plant dies.

But that is not the end. From the plant's seeds will come a new generation, while the impressive, sculptural dry stalk is favored by desert dwellers for a Christmas “tree.” 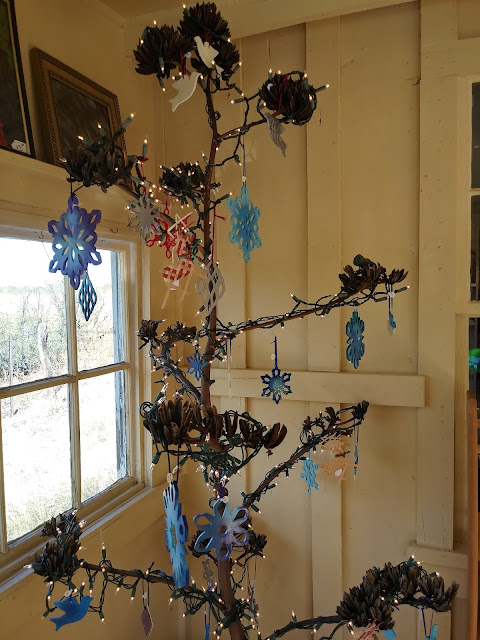 Also, along with cactus and other plants with spines, are many thorny deciduous plants, primarily (around Dos Cabezas) but not limited to the mesquites. One that looks a lot like a mesquite is in the same family (leguminacae, though some botanists break the family down further into subfamilies) but is a different genus. Mesquite genus is Prosopis, catclaw is Acacia. Even that can be confusing, however, as catclaw acacia or Gregg’s acacia, formerly Acacia greggii, now classified as Senegalia greggii, sometimes goes by the common name devilsclaw, but more often “devil’s claw” refers to a different plant altogether, Proboscidea arenaria, from (I kid you not) the unicorn-plant family!

And this, as my friend Ellen would remind you, is why the Latin names of plants are so crucial to identification: What your grandmother in Ohio knew and taught you as “devil’s paintbrush” is not the “devil’s paintbrush” of the American Southwest. What I’ll remind you is that this is a reason for not relying on one plant guide but having access to several.

Back to those thorny shrubs --

And back to identifying catclaw acacia. Its bipinnately compound leaves are much smaller than the leaves of mesquite, and its thorns are curved like a cat’s claws. Hence the name. Once you note the difference between the two shrubs, it’s obvious, even when they are growing all tangled up in each other, as they sometimes do. I found some catclaw pods the other day, too. They curve and twist, and while The Audubon Society Field Guide to North American Plants, Western Region, authored by Elbert L. Little, calls them brown, the ones I gathered the other day are more reddish to my eye.

Mr. Little is no fan of catclaw; nor are many hikers or others: “one of the most despised southwestern shrubs,” the Little-authored Audubon guide says of it. And yet, besides the region’s delicious catclaw honey and the plant’s useful hardwood (for fuel and tool-making), catclaw beans are a native food, ground when dry to make pinole, which now seems to be making a comeback as foodies rediscover ancient local foods. Interesting that another common name for catclaw acacia is wait-a-minute bush. Your shirt gets caught on a thorn, and you have to stop to free yourself. Get it?

Whether thorns grab your clothes or you have, as I do, the perfect thorn-shedding jacket, it’s always worth stopping to look more closely at what the high desert has to offer. Coyote gourds are not considered edible (except by wildlife) but were used by Native Americans to make soap. 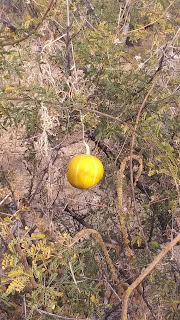 And here in December, when the morning sun comes through mesquite draped with dry vines of the summer’s vanished morning glories, don’t they look like strings of Christmas lights? Look at them with your imagination turned on. 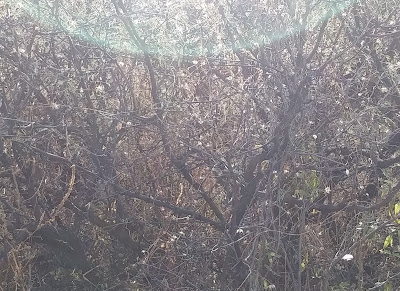 Postscript 12/11/21: A friend's comment about this post being "comprehensive" made me think of all that I had left out -- and I'm not going to try to put everything here, but it seemed wrong to have left out the netleaf hackberry trees, so numerous in the wash and still holding onto their green leaves this December. Though when we first met (one January in maybe 2015?), I was not terribly impressed, I have since then become very fond of this species. Like a U.P. Finn, it has sisu. 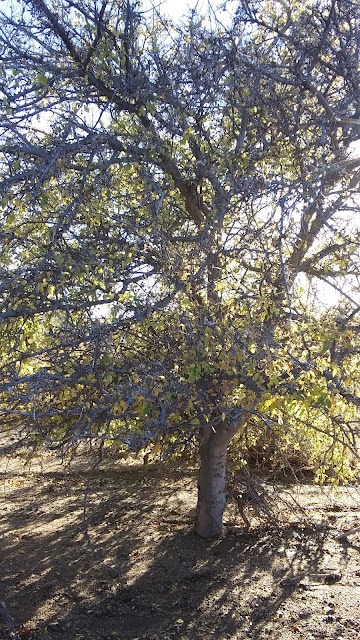