Lake Dunes in the Desert

Playa is Spanish for beach and also the term geologists use for dry lakes, such as the Willcox Playa, called Lake Cochise when referred to in its Pleistocene incarnation.  But the playa in Cochise County is not always dry. In fact, owing to a wet summer and fall, this past winter the so-called “dry lake” held more water than we ever saw in it before — bearing in mind, of course, that our personal memories here are only five years long. Right from the start, though, even bone dry, the playa exerted a fascination for us, as vast empty spaces tend to do.

Our first year, on every trip to town, we would gaze out over that apparent void and speculate on its prehistory, straining our eyes to determine if we were seeing water or a mirage over on the far shore. The playa seemed so near and yet very far away -- and, always, utterly mysterious.

Now we learn that the section of the Sulphur Springs Valley in Cochise County (the northern end of the valley is in Graham County, its southern reaches in Mexico) has two drainage basins, Willcox in the north and Whitewater in the south, and that the heart of the Willcox drainage is the playa. Furthermore, the Willcox is a closed system, an endorheic basin, which means that water draining from the mountains down to the playa does not join ever-larger streams and rivers and make its way the ocean. Water may (and often does) evaporate or soak into the ground before ever reaching the playa, but it isn’t going anywhere else, and this kind of “unintegrated interior drainage” (Gilluly, Waters & Woodford, 1959) is typical of deserts.

Just as today’s Lake Michigan was once the much larger Lake Nipissing, what is now a playa was also once much more. An Arizona Heritage Waters website, hosted by Northern Arizona University, puts it like this:

About 15,000 years ago in Willcox Playa, Lake Cochise reached a maximum depth of 46 feet and covered 140 square miles, maintained by the relatively cool, moist Pleistocene climate. Currently, with a mean annual rainfall of 18.5 inches per year and a mean annual temperature of 90℉, the modern playa can support only shallow, ephemeral ponds that form after heavy rains or snows. The most recent high lake level occurred about 9,000 years ago.

“It’s temporary!” Cher’s character screams at her father, when he objects that the “engagement” ring she shows him is a pinky ring. “Everything is temporary!” he memorably retorts. Ah, yes. Even mountains fail to pass the test of eternity. Ephemerality, as concept and reality, is an essential component of time, without which the world would be frozen and static. 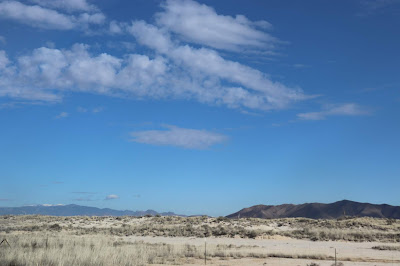 We will not always be here. We are barely insects caught and stopped all too soon by the windshield of time, but my mantra is “We’re here now!” and so, while here, I am endlessly (note the contradiction) fascinated by what my Michigan eyes see as dunes on the Dos Cabezas Mountains side of Highway 186, miles from the extant playa in the opposite direction. 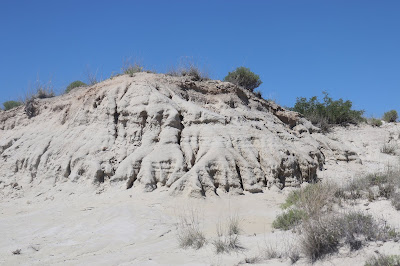 This area reminds me of Lake Michigan sand dunes. Even the vegetation along the road looks somewhat similar — with alkalai sacaton here in place of Michigan’s marram grass — but mountainward, or “inland,” as I can’t help thinking of the land even farther from the playa, the look of the land and its vegetation is nothing like the Great Lakes region of the northern Midwest. 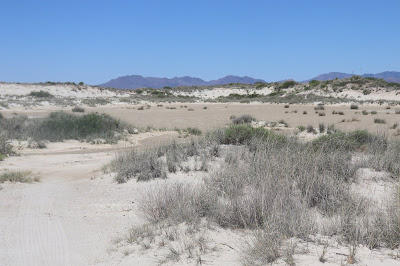 Farther inland and into what appear as dunes, mesquite dominates, as it does on the rangeland around Dos Cabezas. In both places occasional mesquite trees reach impressive size and stand out from their shrubbier fellows. The commonest cactus in Cochise County, cholla, is ubiquitous here, too, with foot-high cholla common and taller individuals commanding recognition. 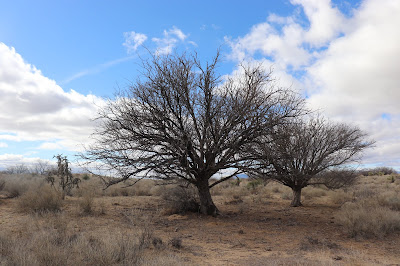 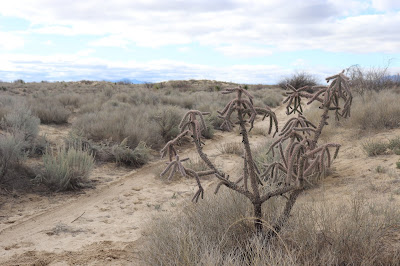 So it really has very little in common with the Great Lakes; however, these “duney bits,” as I can’t help calling them, continue to fascinate my mind, pulling me to them like some prehistoric, displaced mirage. 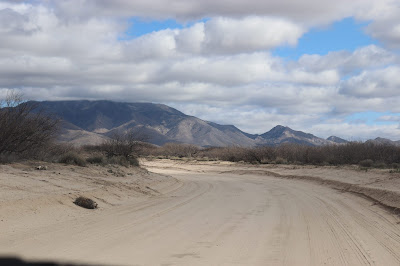 Sarah likes it, too. Of course, she likes to be wherever we are. 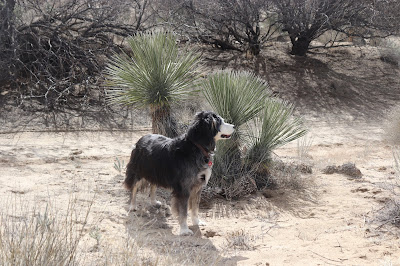