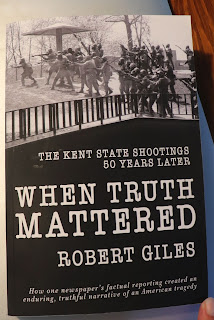 Kent State seems like such an ordinary place … until you try to reckon with its meaning as a battlefield of the Vietnam War.

The students were defenseless. Still, even against the advancing soldiers, they believed they were safe to speak out on their campus. They were exercising three of the basic freedoms protected by the First Amendment to the Constitution of the United States: freedom of speech, the right to peaceably assemble, and the right to petition the government for redress of grievances.

Passages above are taken from the first chapter of Robert Giles’s book. The subject of his book, however, is not about the shootings per se but about the way the Akron Beacon Herald covered the events at the time. Giles was then managing editor, the paper was part of the Knight chain, and Giles had responsibilities all the greater that spring because the executive editor and publisher was out of the country.

What does it take to get a story “right”? To cover truth from all important and relevant perspectives? As second-in-command thrust into #1 position by his superior’s temporary absence, Giles felt his responsibility for the newsroom keenly. “The proverbial buck,” he writes, “would stop with me.”

Here and now in the year 2020, with cries of “Fake news!” from many different quarters (including our own White House), with foreign and domestic “bots” masquerading as American individuals at the grass roots and fomenting discord among us, the questions posed and answered in this account of one particular news story half a century ago provide perspective to a contemporary national conversation that could not be more vital to our country’s future.

Campus demonstrations were nothing new in 1970. The year 1968 had brought demonstrators and university administrations into conflict across the U.S., with protestors agitating against the draft and against the Vietnam War and demanding more socially relevant courses. Both Students for a Democratic Society and the Black United Students had demonstrated at Kent State in 1968. Fifty-eight students were arrested in 1969, SDS subsequently banned from campus.

Campus demonstrations were not new to the Beacon Journal, either. Because Kent was an Akron suburb and the campus only 12 miles from the BJ offices, the paper had reported campus unrest carefully and in detail in 1968 and 1969. Moreover, the paper’s president and editor, John S. Knight, had been following developments in Vietnam back as far as the French occupation. (Many believed, Giles tells us, that Knight’s 1968 Pulitzer was “a lifetime award for his perceptive and forceful commentary on Vietnam.”) When President Richard Nixon announced on nationwide television that he had sent combat troops into Cambodia, not only was the “smoldering center of protest” at Kent State primed to erupt, but the Beacon Journal was well situated to cover student reaction.

Friday, May 1. Students assembled on campus to protest the invasion of Cambodia. Some went on a destructive rampage through downtown Kent.

Saturday, May 2. Kent mayor announced a state of emergency, with curfew from dusk to dawn, and a batallion of National Guard was ordered to the campus. During the night protestors set fire the ROTC building.

Sunday, May 3. Ohio governor James A. Rhodes arrived and took charge of the university, determined to prevent a student rally scheduled for Monday. The governor’s more inflammatory remarks, calling the students “worse than brownshirts” [Nazi storm troopers], appeared only on page 2 of the Sunday paper.

Monday, May 4. It was unclear whether the student rally scheduled for noon would take place. Kent State journalism student and part-time weekend Beacon Journal reporter Jeff Sallot, on campus by 11 a.m. to report on the situation and thinking daylight would keep things calm, expected a peaceful rally. Events proved otherwise.

When Truth Mattered is about journalists putting together a particular story, but for that very reason it must also be a story about the events. Jeff Sallot, with his dual role of student and reporter, and because he was on campus when events unfolded, with an open line to the newsroom 12 miles away, was crucial to the communication of facts to managing editor Bob Giles. Photographer Paul Tople, another student and part-time Beacon Journal staffer, was also where he needed to be. Giles writes of the “potentially combustible tableau” Sallot witnessed with these short, poignant sentences:

The Guardsmen were clearly outnumbered. The students were entirely outgunned.

The bloody tragedy unfolded quickly – within a mere 13 seconds, 61 shots were fired, four students killed, and 11 others wounded – but the newsroom had to get the story straight before going to press. Truth, accuracy, facts. Names and numbers.

United Press International (UPI) first reported two dead Guardsmen. Associated Press (AP) was reporting four dead students. Which was it? Should the Beacon Journal go with UPI or take the word of their own student staffer who had been on the scene, Jeff Sallot, who believed there were four students killed? They went with Jeff. He was there. Other newspapers and radio stations went with the erroneous UPI report and had to correct their stories later. The Beacon Journal was also first to list names of those killed and injured.

The technology of newspaper work was different 50 years ago, with reporters admonished never to leave the office without a “pocket full of dimes” for pay phones. Only the telephone company had mobile “car phones.” (Thanks to secretary Margaret Brown, secretary in the KSU School of Journalism, Sallot had the only open telephone line out from the campus during the critical time period.) Back in the newsroom, writers banged away daily on typewriters, not computer keyboards, and a serious city newspaper published several editions in a single day, which offered an opportunity to amplify and correct earlier reports but was a far cry from today’s minute-by-minute online publishing.

Giles calls the daily newspaper of the Sixties a “ponderous” institution, one he and editor Pat Englehart “were pushing … to be nimble enough to do what we wanted it to do,” i.e., to dig out and put together the complete story of what had happened and how and why. Former reporting on the Vietnam War and Kent State University helped, but it was imperative that Beacon Journal reporters ask questions of anyone who could shed light on the tragedy. Questions, questions, and more questions. Interviewing Guardsmen who were on the firing line was of paramount importance.

Also crucially important, Giles realized, as the story continued to unfold following the shootings, was acknowledgment of team effort in reporting. He cites one time he authorized a single byline, i.e., one name only given credit for a day’s story, and writes candidly that his decision for the single byline was a poor judgment call. He did not repeat his mistake.

Giles devotes an entire chapter to photographic evidence, images that captured the truth moment by moment. We are more skeptical today, aware of how digital images can be manipulated. Fifty years ago exposed film was processed in a darkroom and provided to the newsroom as quickly as possible, and there was no arguing with what the images showed. “The camera did not lie.” But the best images came from student photographers, and one of the best was taken by the photographer to a newspaper other than the Beacon Journal, as a result of the BJ print lab having lost some of his earlier work. Errors can be costly in journalism in more ways than one.

In the weeks following the tragedy, as theories, speculations, brickbats, and calls for investigations circulated throughout the public, the media, and every level of government, the Beacon Journal worked tirelessly to stay on top of it all. Giles tells us that the newspaper staff put together a multidimensional story --

…under the pressure of deadline. They did it in the face of powerful opposition from the military, the Nixon administration, the state of Ohio and the university itself, as well as strong currents of negative public opinion.

Because that is the job of the Fourth Estate: to tell the truth fearlessly, regardless of whose oxen are gored. It is not the job of journalists to serve as mouthpieces for those in power but as gadflies assuring that what is done by the powerful will be exposed to public scrutiny, especially during times of conflict and uncertainty.

In 1970, as now, the United States was deeply dis-united.

In many ways, the Kent State story was about a nation at war with itself.

And because the country was so divided, there was no quick final resolution to the tragic events at Kent State. Giles tells how the Beacon Journal continued to follow the story for years through various reports, grand juries, and civil suits, as families sought answers and justice for the deaths of their children. In searching for the meaning to his story, the author also outlines lessons to be learned from it.”The Meaning” is an important chapter in the book.

With every cell phone possessor a potential reporter and anyone who can access the Internet able to disseminate an instant opinion, truth can be harder to ascertain today. Giles cites “urgency” – and also impatience – as “the enemy of accuracy and care.”

But truth will always matter, because it will, in the realest possible way, in the words of Abraham Lincoln, determine whether “[our] nation, or any nation so conceived, and so dedicated, can long endure.”

I recommend this book most highly to all readers.