Just Beyond Our Reach 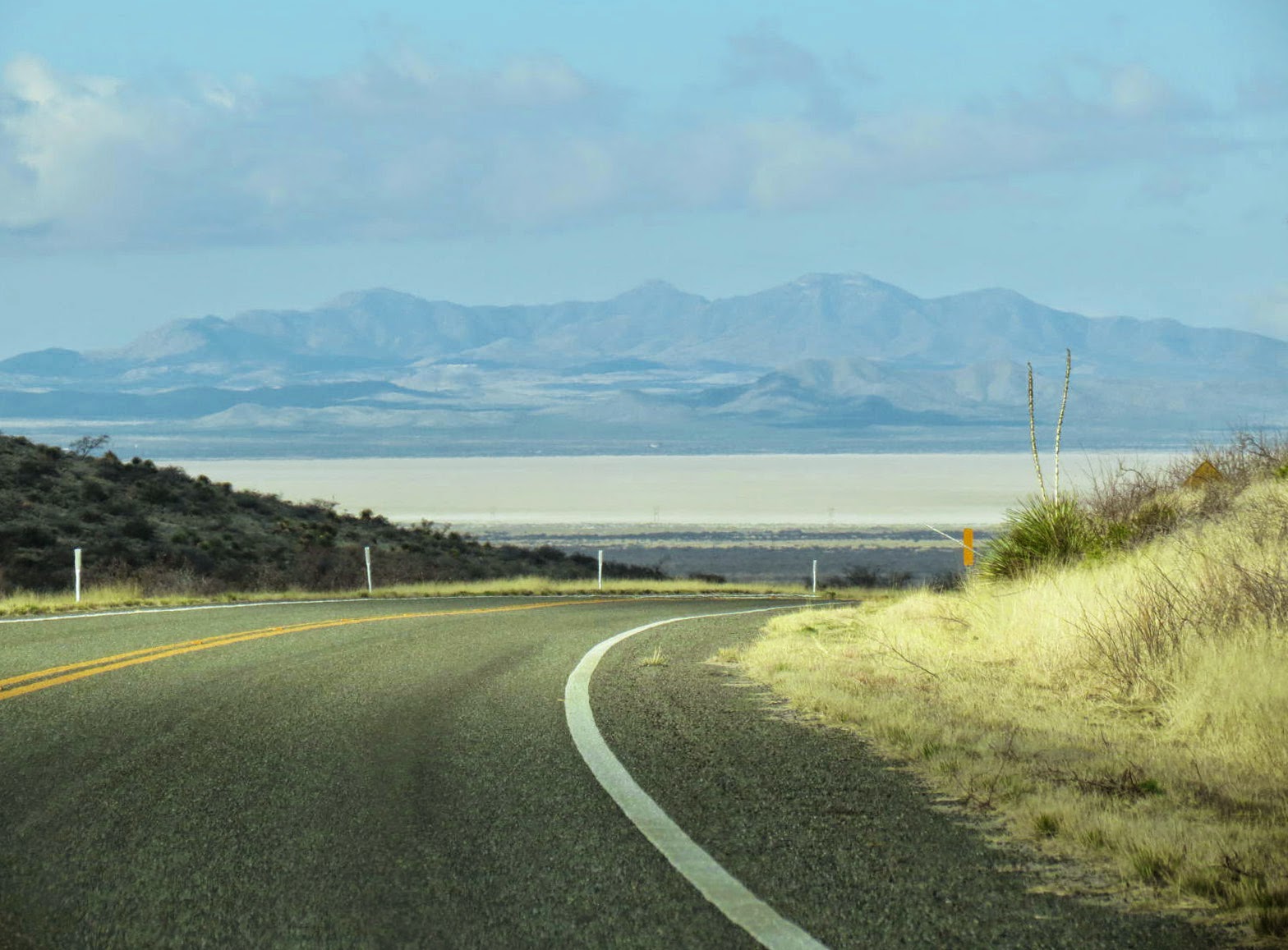 Every day it’s out there, tantalizing us in its nearness and teasing us in its remove. We drive past, too far beyond the perimeter to have a good, clear look at the great, white, dry, ancient lakebed. We strain to see farther. I try the zoom function on my camera, and we even stop to employ binoculars, but we are continually and at the same time enchanted and frustrated.

The playa! Magic word, magic name, mysterious presence! Maps say “Willcox playa,” and one book I read called it the "Willcox dry lake," but around here it’s simply “the playa,” because there is no other. And truly, you’d have to do some traveling to find anything like it. 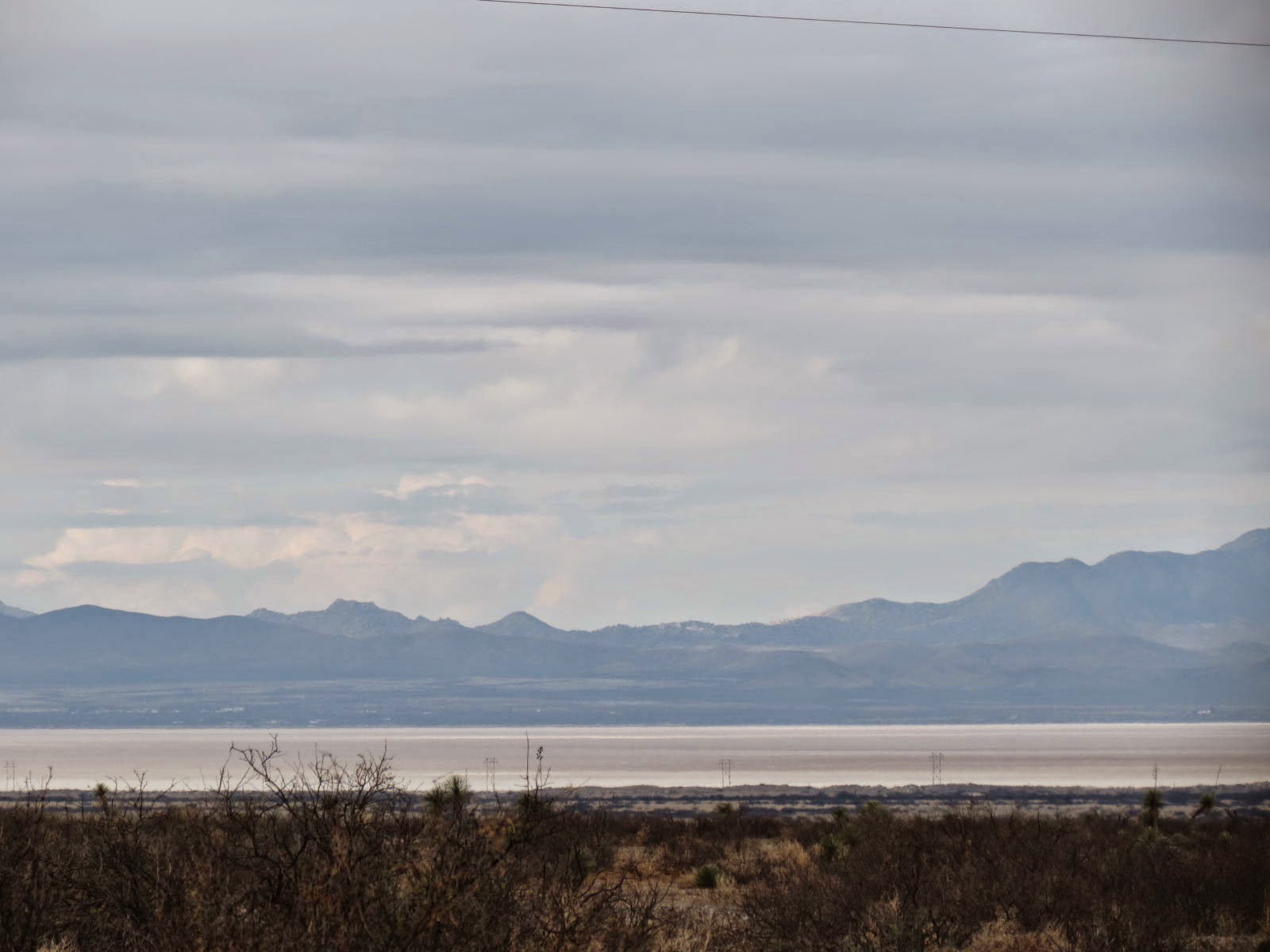 Twelve to fifteen thousand years ago it was a lake. Lake Cochise, as geologists call it, retrospectively. Today the ancient lakebed holds water only intermittently and never, I’m guessing, in its entirety. But then, questions of when and how much water might be found out there are part of its mystery, as far as we are concerned.

One day we were driving north on Rt. 191, coming home from a little jaunt, and both of us swore we could see water out on the playa. I have sworn the same from Rt. 186, David receiving my avowals with skepticism. From 186 the water – well, the water I claimed to see, if it is there at all – the water is (or was – or was not) much farther from the road than what we were sure we saw on the other side. My sentences reek with doubt, I realize. The playa is said to hold “shallow, ephemeral ponds,” a phrase that encourages my belief, especially considering two recent days of steady rain. And yet, another source warns that distant blue mirages have fooled many a viewer before me! There is definitely standing water in pools closer to the road, but what was I seeing out beyond the grass, that sparse desert rangeland where cattle graze? Water or mirage?

One day I read of a wildlife area on the western edge of the playa, accessible from the Kansas Settlement Road, and with high hopes we set our course in that direction. Ah, but remember that the playa is the lowest portion of a low sediment basin surrounded by mountain ranges, and that when down on a flat surface one can hardly see through standing brush. Also, I must confess, the day we tried this was the only day we had no water with us! I’d taken the bottle into the house to refill and forgotten to put it back in the car. (Lesson learned!) 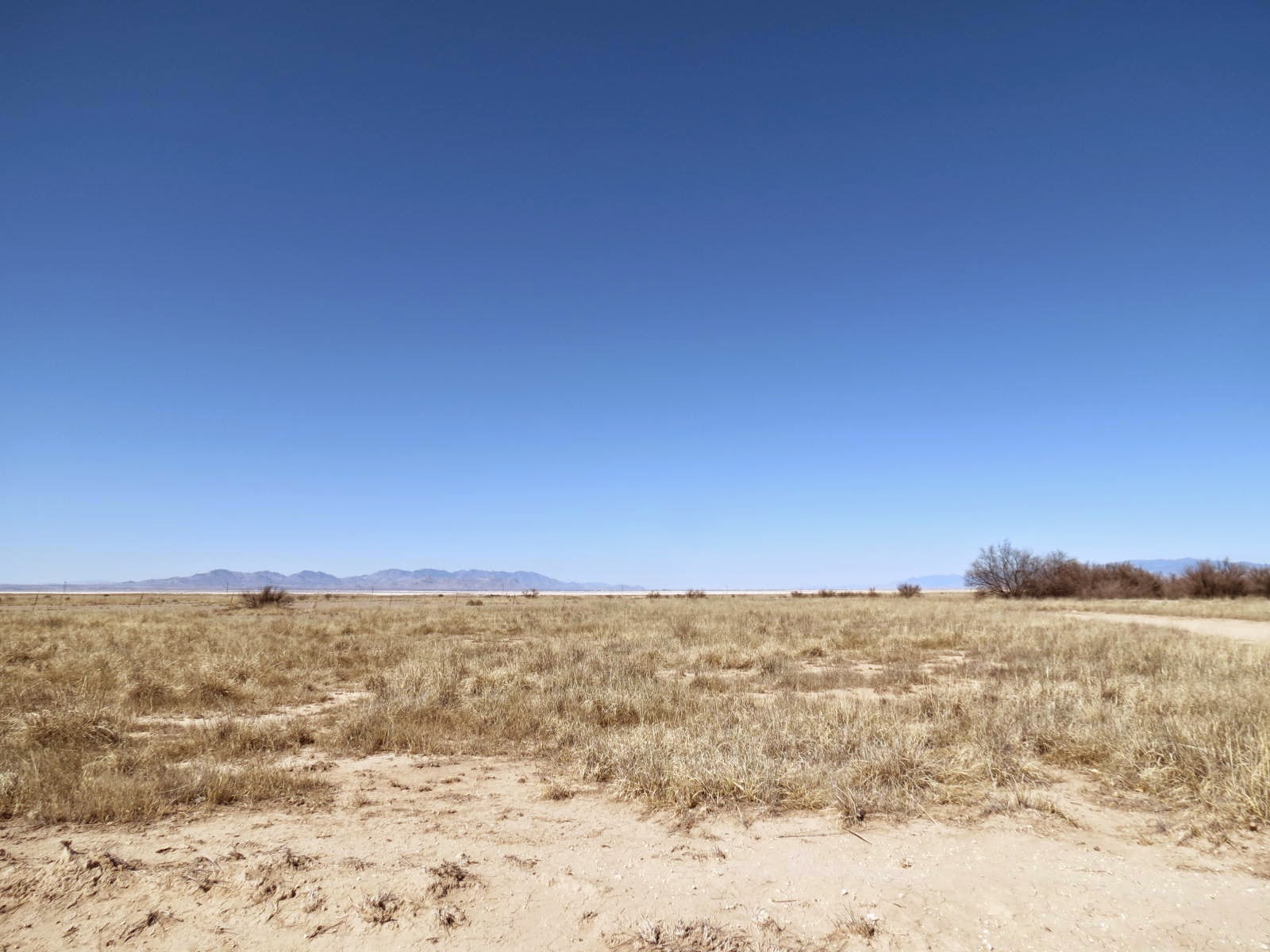 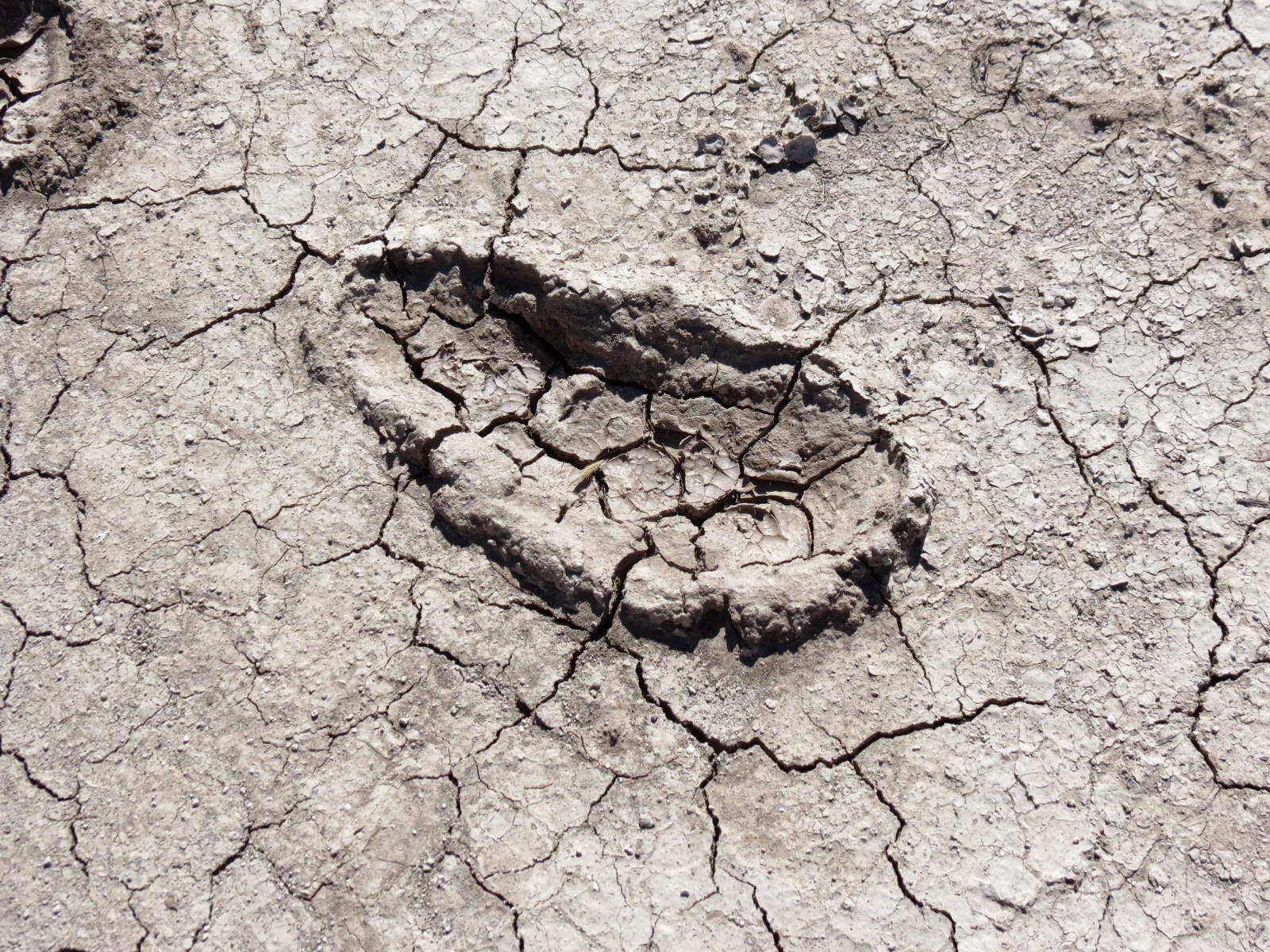 The sun was blazing, with no shade along the sun-baked trail. We walked over half a mile on dry, caked mud until we could finally see the bare, white, open expanse stretching ahead, very far ahead still. Alas! Every step taken would have to be retraced coming back, and we were sadly unprepared. No drinking water with us! -- And no tripod, either! (I will never be a serious photographer as long as I remain so as lazy as I am about tripods.) Well, what do you see in that wobbly, unfocused distance? Water? Mirage? And can a camera capture a mirage, or is a mirage, like an hallucination, the combined creation of an eye and a mind? 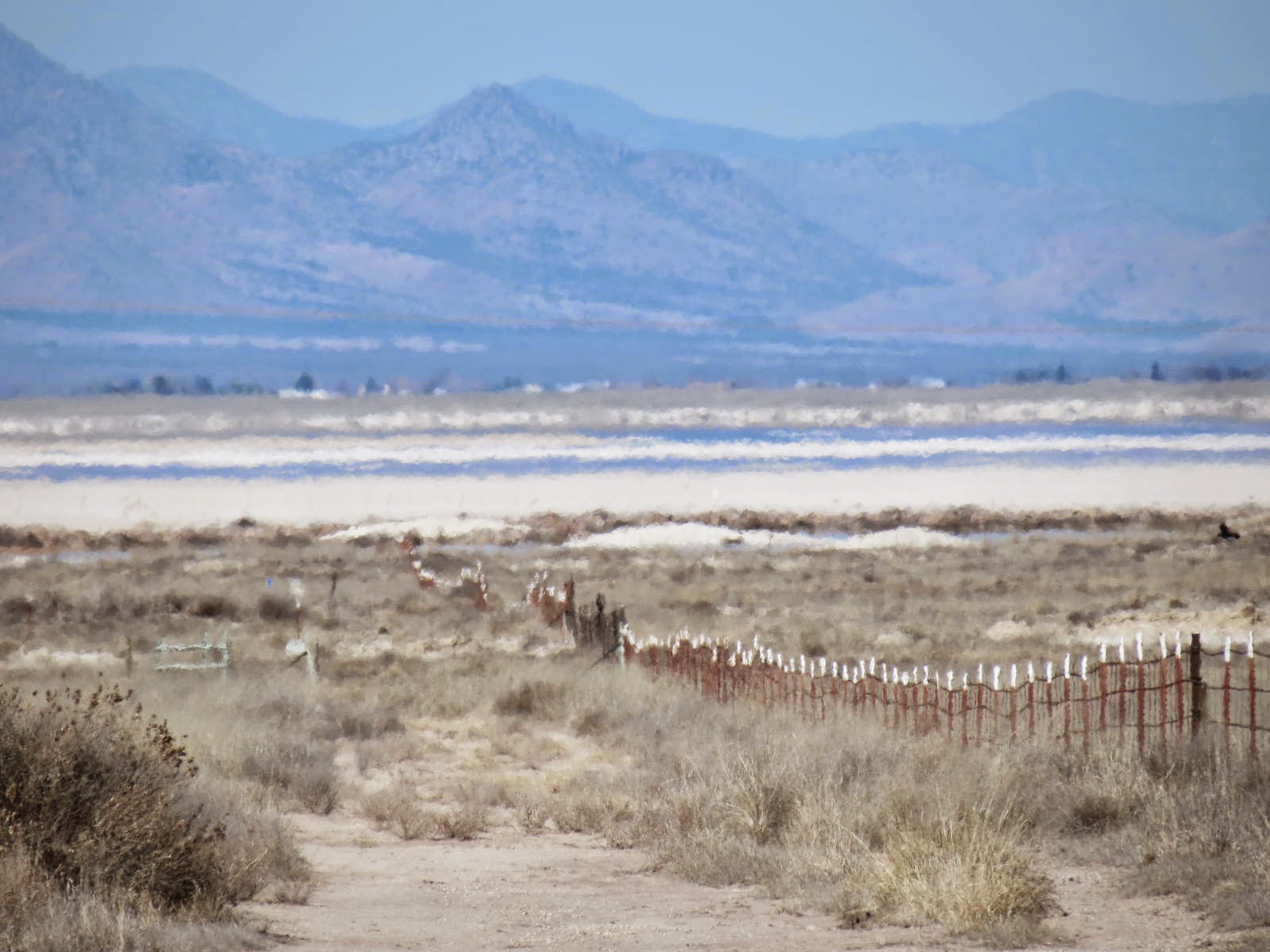 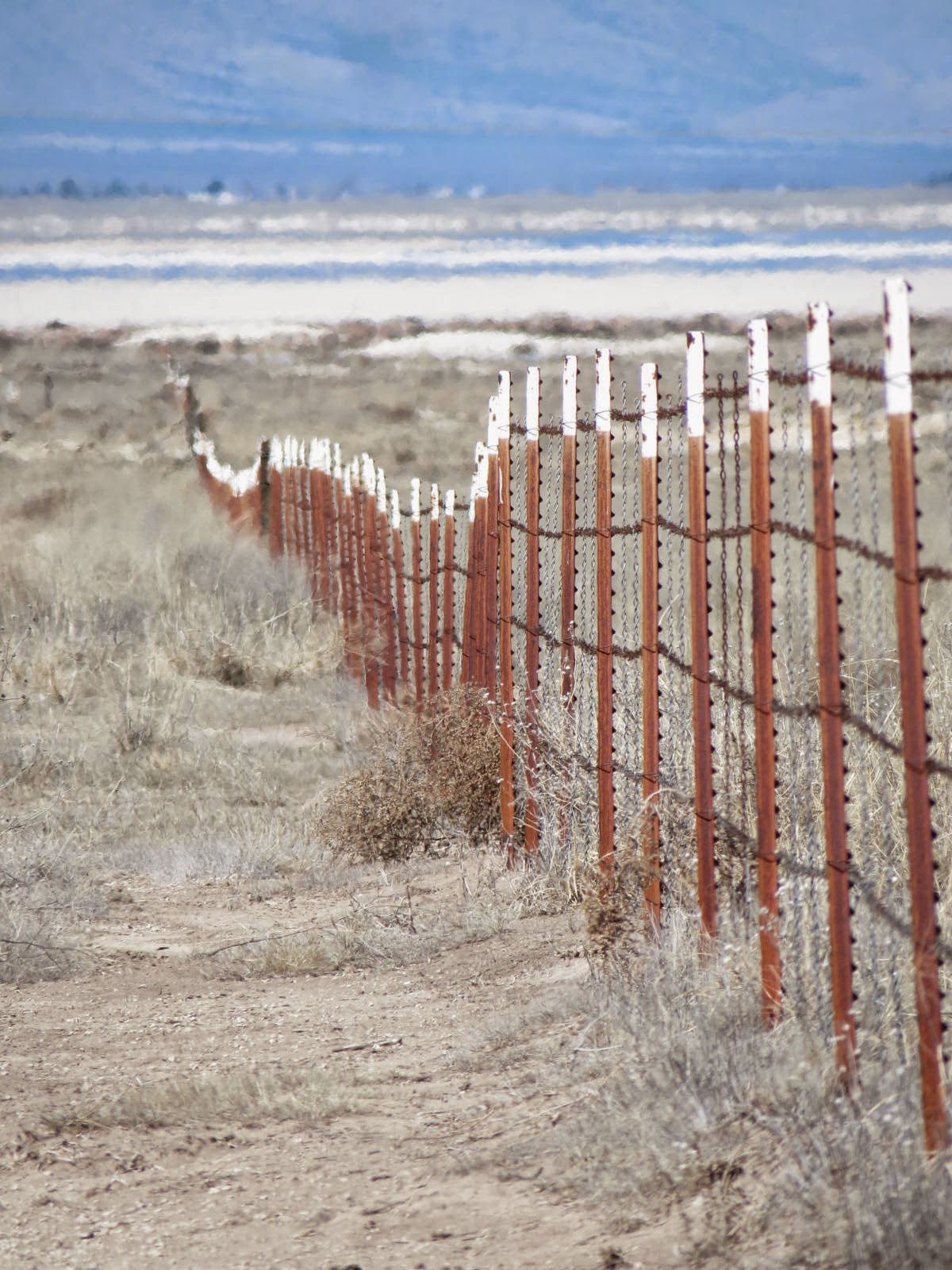 The playa is said to be 40 or 50 square miles in area, depending, it seems, on who is doing the measuring. The area is not entirely open to the public, either, as it is full of – frightening words! – “undetonated ordnance” from its days as a test bombing range. To my surprise, however, I found online an illustrated account by someone who had been out there on a motorcycle. Perhaps certain parts are fenced off and other parts open? We may never get far enough out to answer that question. Perhaps we will keep it as a mystery.

The Willcox playa is cousin, in a manner of speaking, to the Great Salt Lake, both formed in the Pleistocene Epoch of the Quaternary Period of the Cenozoic Era. In geologic time, that’s recent. But sometimes, as we descend from the 5,082-ft. elevation of Dos Cabezas to 4,187-ft. Willcox (compare to Tucson at 2,584’ and Northport, Michigan, at 628’), we make an illegitimate imaginary collapse of the Jurassic, Cretaceous, and Quaternary periods and imagine the playa as lake home to giant thunder lizards, guzzling aquatic greens in the shallows and thrashing ponderous tails as they feed. It isn’t much harder to picture that scene than it is to envision Dos Cabezas as home to a bustling population of three thousand, a community served by school and railroad and post office, and numerous stores of various kinds. 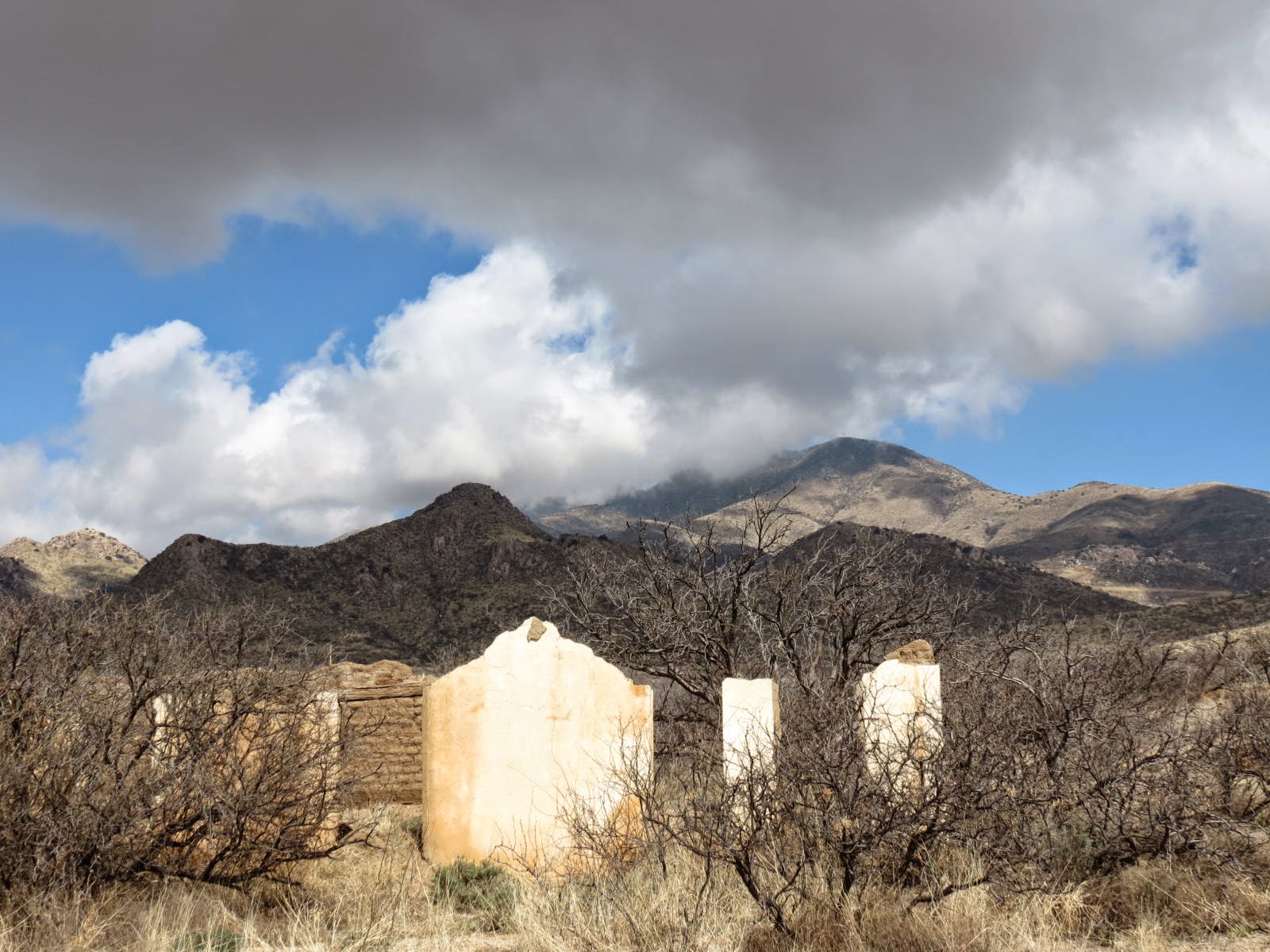 Like the playa, the past here seems very near and at the same time tantalizingly and frustratingly just beyond our reach.

Look here for more (much better) images of the Willcox Playa.

2) you bring magic and mystery to a place I've [sadly] begun to take for granted. Thank you.

How interesting! You are giving us a wonderful travelog of the area in which you are staying. As for the tripod, I'm getting lazy with that too. Just up the ISO and that will give you a faster shutter speed so you can get sharp images sans tripod.

It strikes me that your adventures seem like exploring the surface of the moon! A survey
of the satellite photos suggests
that as well. Other than the interstate and numerous small
clusters of green circles (irrigation, I have no idea of the crop) it appears an arid place of flats and abrupt ragged
rock upthrusts. Given the harshness of the land and the
shortage of water, it is odd
that a megalopolis like Phoenix
would grow up and seemingly prosper. (or that Apache could
thrive).

Thanks, you guys -- for for the tip, Karen. BB, Phoenix is pretty far from us and at a much lower elevation. I think it's completely out of the basin and range region. But check out my new post today:
http://booksinnorthport.blogspot.com/2015/02/looking-from-other-side.html
and stay tuned for something REALLY exciting in the one coming after that!!!

Helen, you've been here a long time. It's all new to me.

Thanks, you guys -- for for the tip, Karen. BB, Phoenix is pretty far from us and at a much lower elevation. I think it's completely out of the basin and range region. But check out my new post today:
http://booksinnorthport.blogspot.com/2015/02/looking-from-other-side.html
and stay tuned for something REALLY exciting in the one coming after that!!!

Helen, you've been here a long time. It's all new to me.