Little Things Add Up, in Nature and in Society 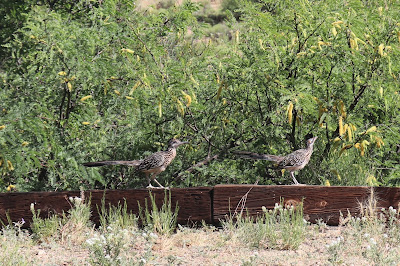 In mid-May in southern Arizona, to stand under a blooming mesquite tree or pause near a low-growing mesquite shrub is to become aware of a low hum emanating from the blossoms. The calmer the day and hour, the louder the hum. This is harvest season for small pollinators, and they are hard at work.

The other day, somewhere along the line, a bee got into our car, and, thinking at first glance that a large spider had hitched a ride on my bare leg, I hastily brushed at it with my hand. Not far enough away, though, as became evident when I felt the sting on the underside of my thigh. Moving quickly, I saw a struggling bee on the seat beside me and realized that the insect had had just enough wiggle room under my leg to deliver just enough sting to cause me to move before smothering it completely. The sting burned for a few minutes before it subsided quickly to a small, raised red spot not much bigger than what a mosquito bite would have delivered. No great harm done to me. But I’d inadvertently caused the little bee mortal injury.

How often do we think about how we and other mammals and birds are largely dependent on the work of these much smaller creatures? Pollination of fruits and vegetables, if we had to do it all by hand, would barely keep us alive. Large grazing mammals feed on grasses and other plants that reproduce by seed, that seed requiring antecedent pollination of flowers sometimes so small and insignificant we rarely notice them at all. (Grass flowers? Yes.) Many species of bird rely on seed and berry diets, a berry being nothing more to nature than the covering of a seed or seeds, and even the insects and other invertebrates that carnivorous birds feed upon feed first on plants. Without bees, wasps, flies, and all the other myriad pollinators and their unpaid labor, earth’s menu would be very short for the rest of us, not to say nasty and brutish.

Bees are small. Seeds are small. We don’t generally look at grazing cattle and thank bees for doing their part to produce beef. I’m thinking about bees and cattle now because I am living in their midst.

And in these stay-at-home days of COVID-19, I’ve had time to see and think about things I’ve never noticed or don’t often think about. One of my small new observations is how often birds clean their beaks. A bird will stand on a twig (flying to it after a stop at the suet feeder snack bar) and lean forward to swipe its beak to and fro against the twig in front of it. It looks like a bird sharpening its beak as one would sharpen a knife, but most ornithologists think cleaning is the primary purpose of the behavior. The curved-bill thrasher was the first bird I noticed doing this, but then I saw others doing the same, and now all the time I see birds cleaning their beaks. A small observation, but how can I have missed it all these years, when they are doing it continually? 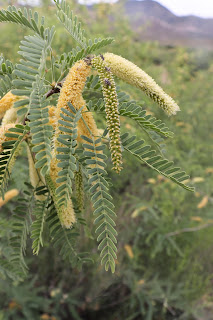 Mesquite flowers, now. Often these long, caterpillar-like catkins hang in clusters, and the other day I noticed for the first time – really looking at the plant -- that within a given cluster, the flowers blossom sequentially rather than all at once. I imagine the seeds will ripen the same way, much as happens with clusters of blackberries or other bramble fruit, berries within each cluster ripening in turn rather than at the same time. My observation is small and, when I think about it, unsurprising. So what? Still, I wonder what advantage the plant gains. A longer season for the seeds to be disseminated abroad? That would make sense.

The murder of a single human being is never a small thing. Whenever it happens, it is tragic. In the United States, one of our national tragedies is the frequency with which black men are murdered while simply going about their daily lives, and a second tragedy is that those victims’ murderers are rarely punished. On and on it goes, and the hearts of black parents who fear and grieve in advance are, sadly, not unreasonable in their fear and grief. Here, then, is yet a third tragedy, that of decent, law-abiding parents who must raise their children in fear in their own country. Over a century after slavery was ended and long after Jim Crow laws have supposedly been put behind us, how is it that we can live with this continued national shame, with an America offering such very different experiences to its citizens, based on nothing but the color of their skin?

As I say, this is a big thing. Nothing little about it.

What I see as little are some of the things white people can do, each of us, one at a time, to try to bring about change, to work toward bending that oh-so-recalcitrant arc of justice. Lists of books are put forward to raise awareness of white privilege, and I don’t want to minimize the importance of raising that awareness, but a question I raised recently with Facebook friends is, once awareness has been raised, what can one go on to do to bring about change?

Of the various comments and responses, perhaps the most helpful I received, because it contained a lengthy list of calls to action, was this from my stepdaughter, 75 Things White People Can Do For Social Justice. It’s hard to imagine anyone, black or white, who could check off every item on the list and say at the end, “Yeah, I did all that,” but still I found the list itself helpful, even encouraging. It’s not saying that we all have to rush out and do everything at once but that there are many ways to contribute. I was encouraged to see that while I hadn’t done a lot of big things, I have done several little things, and I see more on the list that I can do in future.

Because what’s the point of playing the “Ain’t-It-Awful” game? The point is to make the world better, one little thing at a time. Maybe one little thing every day – for instance, one letter or telephone call or e-mail every day.

For today, my one little thing is sharing a book list on a new separate page of this blog. As I wrote there, I welcome additions and suggestions. The page will be a work in progress. We all need to claim our power to make change. Thank you for reading today. 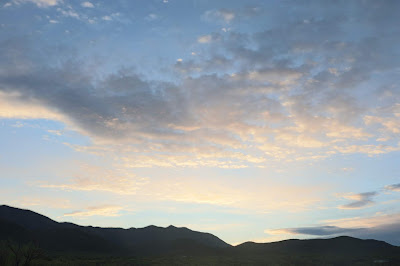