Just Out the Door and Down the Road 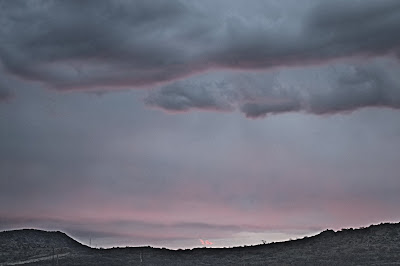 This morning’s sky confirmed the forecast I’ve been seeing on my phone for several days: we’re in for a rainy day — and that’s not bad. A day of rain now and then damps down the risk of fire, a good thing in the high desert. The prediction for the next nine days following today’s rain is for mostly sun with a few clouds. Today we're in for an all-day soaker. Fine. 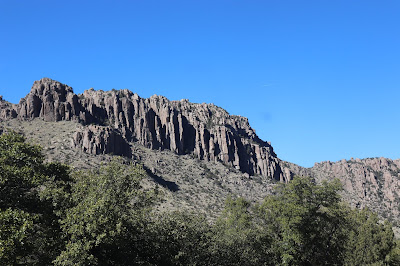 We made an afternoon expedition on Saturday to the spectacularly beautiful Chiricahua National Monument, where crowds I expected to see on a holiday weekend were largely absent. Absent also (and this was a real blessing) was the strong, cold wind we normally encounter up on Massai Point. Although the air temperature kept dropping as we wound our way to the 6,870-ft. peak, and we saw increasingly larger patches of snow along the narrow, winding road, sunshine was absolutely glaring when we reached the high end of the road, and on a strategically placed bench, looking out over the astonishing hoodoos, across the 40-square-mile playa and surrounding Sulphur Springs Valley to the Dragoon Mountains seventy miles to the west, we were out of even the slightest breeze and content to soak up sun to our hearts’ content. 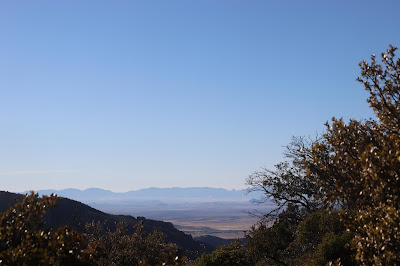 After five years, I’m finally getting some light grip on the geology of Cochise County, Arizona, and the sky islands of this basin-and-range country. At least, I think I am, but don’t quiz me. Instead, correct me if you think I’ve gone astray.

To understand the formation of the Chiricahua range, we have to go back twenty-seven million years and the movement of tectonic plates those 27,000,000 years ago, when the molten core of the earth was much more active and closer to the surface than it is in Arizona today. Back then a dense oceanic plate of basalt was overridden by a lighter plate of granite (the North American plate, moving west in true though still prehistoric North American fashion), and as the resulting collision (friction?) increased both rock and water temperature, the former melted as it mixed with the already molten mantle.

Just south of the Monument (which in itself occupies only a portion of the entire Chiricahua range) are the remains of what is known as the Turkey Creek Caldera. There a magma chamber broke through the earth’s crust and spewed burning gas, ash, and lava over 1,200 square miles in an explosion estimated to be five to ten times larger than the historic Krakatoa eruption in 1883. 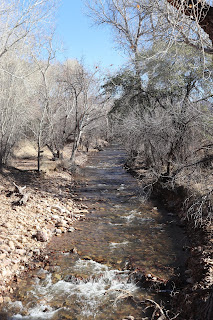 Turkey Creek is so calm and quiet today that it’s almost impossible to picture the nuée ardente — scorching rain! — that flew upward from the prehistoric volcano and flowed outward at over 100 miles an hour as a burning avalanche! In time, of course, the magma cooled and hardened, forming a rhyolite bedrock over eight hundred feet thick. And that and similar eruptions were the birth of the Chiricahua mountains.

But basin and range land is not created by volcanos alone. Once the dramatic volcanic events are over and plate movement slows down, everything gradually cools, and it is then that the cooling masses of rock, slowly but irresistibly, shove against each other, faulting, tilting, and lifting some segments up, while the surrounding basins sink. The creation of Arizona’s sky islands, then — these fault-block mountain ranges that rise up from a nearly level sea (though 4,000+ feet above sea level) of grassland and desert — was very unlike that of the folded Appalachians with their more gradual slopes. 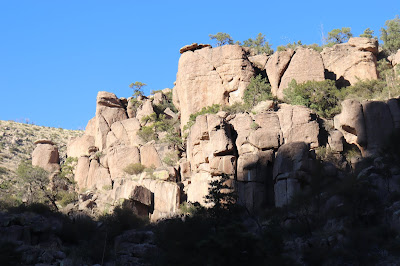 Nor, however, is faulting, tilting, and rising the end of the story, because subsequently comes the much slower action of weathering. Wind and water (in liquid and solid form) take starring roles in the weathering story but achieve their dramatic effects at very undramatic speed.

Formed by case hardening caused by the amorphous silica left behind after precipitated water evaporates off the surface of the rock formations, pinnacles in Chiricahua National Monument were formed by the freezing and thawing of water during the last ice age approximately ten thousand years ago.

Sculpted rhyolite makes for stunning scenes in Chiricahua, where jointed columns of rock invite “the entry of water, instigating chemical and physical weathering.” 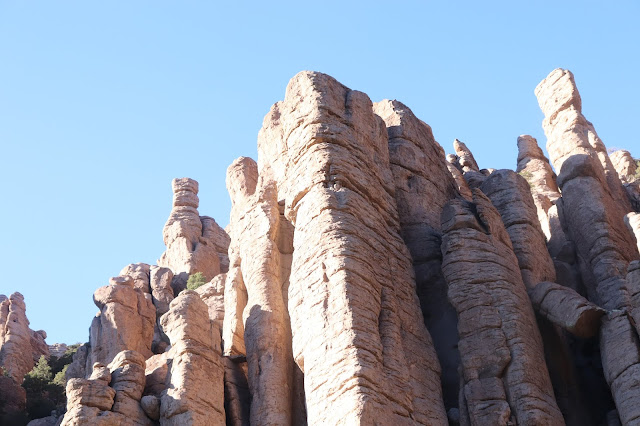 Less spectacular but as much a part of the geologic story as the hoodoos are “solution pans” and “slot canyons,” the latter “forty times deeper than they are wide” (Ibid.).

We do not always think about it when admiring mountain hoodoos and the other rock formations we find so amazing, but weathering is a relentlessly ongoing process, continuing in our own age, day by day. Saturday there were pockets of snow in the mountains. As sun reached some of them, that snow melted, and meltwater sought out cracks through which it could descend to creeks and rills headed for the playa. Perhaps that ultimate destination would not be reached, but water would push its way along as far as possible, carrying with it occasional small bits of rock and stone. 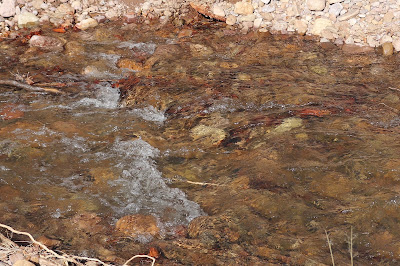 And on the other side of the mountain from where we found our sheltered bench, wind was doing the work it does night and day. 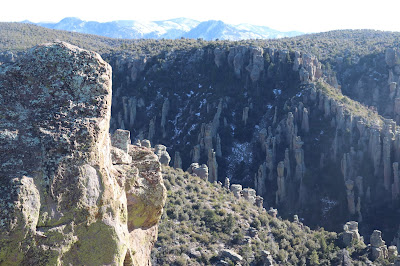 Because of weathering, all the sky island peaks have been worn down from their original height, and the valleys — recipients of eroded mountain material — have gained in elevation. Today’s rain is a geologic drop in the bucket, but each raindrop, each snowflake, contributes to the cumulative effect. 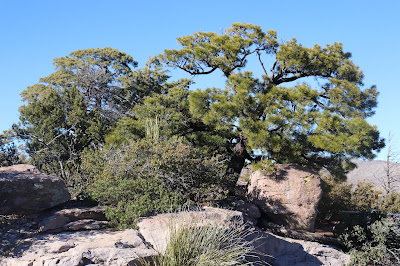 The Artist and I never view Chiricahua with jaded eyes. Every visit feels like the first time, so unusual and fascinating and mentally challenging are the sights. For me, though, the presence of tall, green trees is almost as exciting as the rock formations. Down in our winter ghost town we have only mesquite and netleaf hackberry, whereas in Chiricahua there are beautiful alligator juniper, Gambel oaks, Douglas firs, and stately Ponderosa pine. We are so very lucky, we tell each other, to have all this natural beauty practically in our backyard! It doesn’t even have to be a day trip: half a day gets us there, gives us time for a walk and a picnic, and gets us back to our own Dos Cabezas, which are, literally, in our backyard, so that coming back home at the end of the day is never a disappointment. 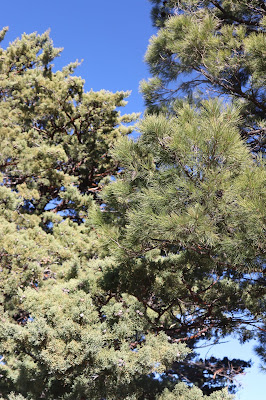 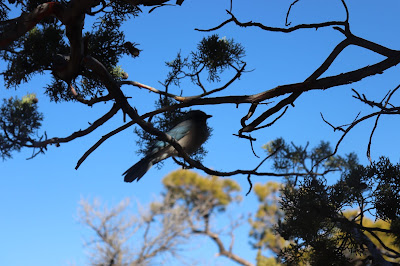 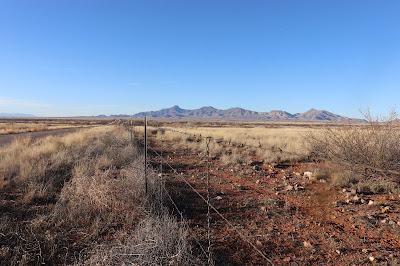 Back in Michigan, where we live maybe a mile from the glory of Lake Michigan, we don’t see the water from our windows, but neither do we pay lakeshore property tax or worry that rising lake levels will carry off our home. The closest road to the Lake is private, so we have to take a little ride to get to a beach, but it isn’t all that far, and on mornings after stormy, windy nights we can hear the waves from our front door. Thus it is well within our reach, that glory — even closer than it was when we lived in Kalamazoo and I occasionally needed a 100-mile evening round trip so I could walk on the beach to unwind after a day of work at a job I did not love.

I was lucky even in my girlhood, when the house my parents bought for our move from South Dakota to Illinois was on the last street of a subdivision, out beyond the city limits, with a working farm across the road to the west. How hungrily and greedily and gratefully, too, I watched thunderstorms and sunsets in that open expanse from our enclosed front porch!

South Dakota, Illinois, Michigan, Arizona. Fields, lakes, desert, mountains. Just outside the door or maybe a little way down the road, open spaces and natural beauty have always helped me breathe deeply and filled me with peace. 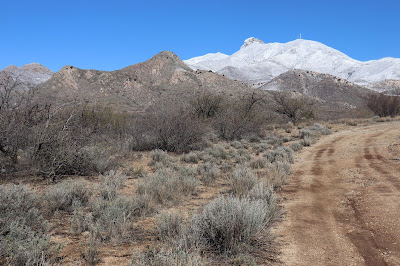 It must be in our genes to like the open spaces. Even when we lived in the N Minneapolis suburbs, there was a creek and a few square miles of rolling pine down the street to go XC-skiing in. With each
generation, the spaces shrink. Our new Idaho home sits on the edge of town. When we moved in, there was an acre truck garden to our west, two horse pastures to our north and a field of Herefords to our
east. Now some 40+ years later, new homes have moved in. A local
curiosity is that many people like to build large "shops": two story
affairs. Where the gardens and animals used to be, we are now surrounded by several of these large outbuildings. I suspect the
progress of urban growth affects most others as well. We recall the restless Daniel Boone, whose quest for open space led him from Virginia, to Kentucky and finally to the edge of expanding civilization, where the Lewis & Clark met the aging Boone on his
farm up the Missouri River at St. Charles, MO. You have probably noticed that the forests of the upper Midwest offer the feeling of
open space -almost wilderness, compared to the wide open areas of the west. We liked to park the car and hike and noticed the open
west phenomenon: "Hey we can STILL see the car". I agree that whatever terrain, and wherever we are, there is much to savor in terms of local history, geography, seasons and even the people and
their cultural differences. Tis hard to get bored, whatever the space.

Here's kind of a scary thing going on in the U.S.: https://www.darrinqualman.com/house-size/. In our lifetime, the average house size has doubled! And that's at the same time that the typical American family has shrunk in size, with fewer children and older generations (grandparents) no longer living in the home. More people, more -- and much bigger -- buildings everywhere, BB. But those of us who still need outdoor space can still find it, and we can thank our national and park services for a lot of that.

It's easier to find a sense of wilderness in smaller territory in the northern woods because one's line of sight is so much more restricted. And I'm sure you recall, as do I, the feeling of being lost in the wilderness in your own childhood backyard: a matter of where we focus our attention.

And the open, majestic spaces put our petty, time-limited troubles in perspective, too. As one Western writer put it:

“‘The day our bones are dust and the odor of us is gone, the world will not have changed at all. The rocks will be the same, the sky the same. How many summers will pass before we are forgotten? Not even one.’” - J.P.S. Brown, NATIVE BORN

Good to hear from you, BB!