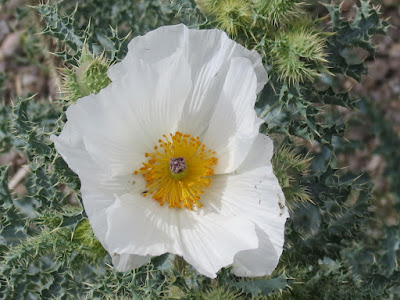 To live “in each other’s pockets,” as the Artist and I have done since late January, two people have to manage with a minimum of privacy and a maximum of love and good nature. We’ve done very well, even entertaining guests from Michigan during and shortly following a mild heart attack and 2-1/2 day hospitalization in Tucson. We’ve also gotten out and about in Cochise County quite a bit and up into Graham County (though the trips to Pima County were only the mandatory ones), and we’ve socialized here in the ghost town to an unexpected degree. All of this we’ve done together.

The other day, however, we did something completely different. We spent over eight hours apart! 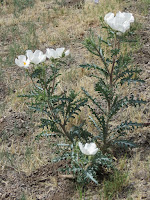 My adventure, weeks in the planning, was a solo trip over to Benson for a rendez-vous with a friend who lives in Tucson. We two worked and socialized together years ago in Kalamazoo, before we were married to our beloved husbands (and back before either one of us could rightfully be called “Doctor”). When my friend suggested we meet roughly halfway between the southeast side of Tucson and my Cochise County ghost town, she also looked online and found a couple of interesting places we could investigate in Benson, so thanks to her we put the Quarles Gallery and Endeavor Gallery on our agenda for the day, while my contributions were Singing Wind Bookshop, the Horse Shoe Cafe, and the monastery in St. David. I had a few other ideas for us, had we more time at our disposal, but the basic list filled the hours pleasantly — and only too quickly.

We met at the public library and walked from there to the galleries. It turned out that the Quarleses, husband and wife, were the couple David and I had meet in 2015 atop Massai Point in the Chiricahua National Monument and then again at a show of miniature paintings at the visitors center on the edge of Willcox, so I was delighted to find them again and to visit their beautiful gallery on Benson’s main street. Don’t quite understand how David and I had missed it on our other trips to Benson. 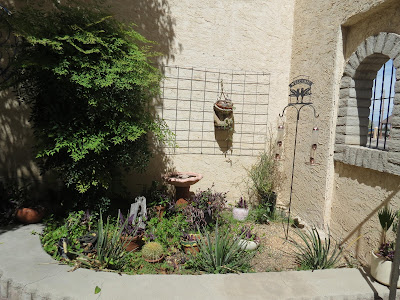 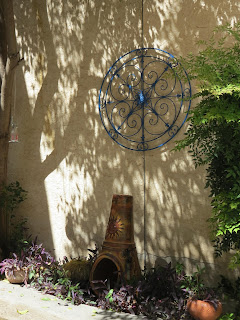 The little courtyard entry was so charming that my friend and I stopped for a photo session but once inside, I refrained from pulling out the camera to concentrate on taking in the art. Sharon Quarles has her work on the left wall as one enters, and Doug’s is on the right, and farther back are a couple of featured guest artists. There is a lot to see and much worth lingering over. Doug Quarles, by the way, is the artist responsible for the murals all over Benson, one of the most attractive aspects of the town.

Second stop of the day was the Endeavor Gallery, a co-op run by and featuring works by members of the local arts association. It too was well worth the visit, with a variety of work in a variety of media, plus a small gift shop area.

— I’ll cheat here and skip ahead. On Tuesday the Artist and I made a trip to Benson, as I’d learned that Endeavor would be having its official ribbon-cutting “opening.” At the opening on Tuesday I learned that the co-op gallery space had formerly been a gun shop and had required many months of cleaning and renovation by volunteer labor. They really did a magnificent job! I also spoke to one of the volunteers whose grandparents had run the old post office in Dos Cabezas — and I say “her grandparents” because while her grandfather was the official postmaster, she told me, women not considered eligible for the position then, it was her grandmother who really did the work — which was very interesting to me. And of course on Tuesday we went to the Quarles Gallery, too, so the Artist (my Artist, that is, hence the capital A) could reconnect with our acquaintances from the mountaintop meeting three years before. 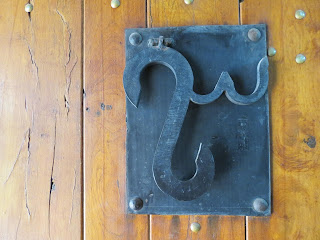 — Back to Monday: I came away from the galleries on Monday with some beautiful cards, and my friend found the ideal gift to take home for her husband, and altogether we were well pleased with this auspicious beginning to our Girlfriends’ Day. We walked through wind and sun back to the library to retrieve her truck for a drive out to Singing Wind Bookshop. We were greeted as soon as we turned into the long driveway. A bookstore on a ranch -- what a concept! 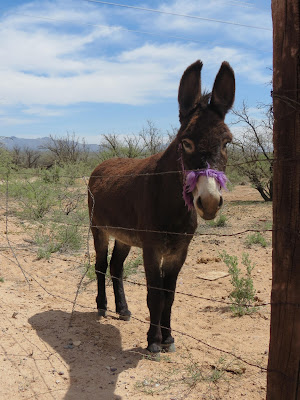 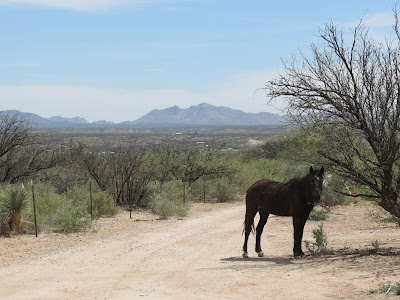 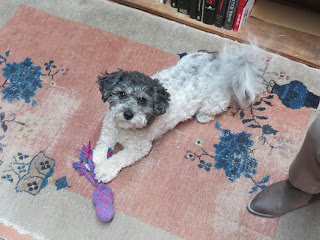 My friend did not have a chance to meet Winn in person, as the bookshop owner was recovering from cataract surgery, but bookshop dog Missy and a human helper made us welcome, and we browsed to our hearts’ content, showing each other particularly exciting finds. I came away with a beautiful little volume, David Mas Masumoto’s Letters to the Valley: A Harvest of Memories. His Epitaph for a Peach is one of my favorite books (though it almost broke my heart), so I couldn’t resist this one, made all the more irresistible by Doug Hansen’s lovely watercolor illustrations. And now, looking at the back of the book, I see a quote from Alice Waters, sister of another good friend from home. So, the perfect purchase!

But I admit we were almost as taken by the donkeys as by the books. My friend took this picture of me with a couple of them. 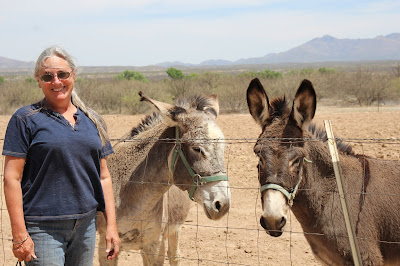 “What should we do next?”

It was about noon, maybe a little after, so we agreed to see if we could get a table at the Horse Shoe Cafe. Bingo! That worked out perfectly, too. 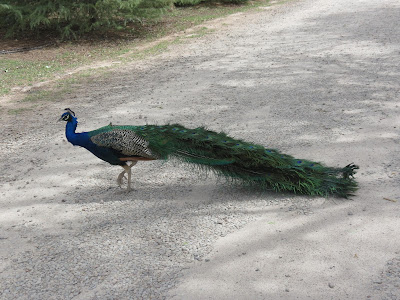 I’d visited Holy Trinity Monastery several times before, but my friend, though intrigued by the idea, had never been there. (Her doctorate is in the teaching of religion, hence her interest. As for the monastery, I need to get clearer on its history and present organization, but that will keep for another time.) We parked at the first building, the office and bookstore, and walked down to the meditation garden. On my first time there this year, you may recall, many of the peacocks were strutting about, screeching, and I either didn’t have my camera or its battery had run out (I forget which). Then on subsequent visits, the peacocks were nowhere in sight. Well, this time I was ready for them, and a bird with a fabulous tail practically came out to greet us as we approached the garden. Very satisfying! 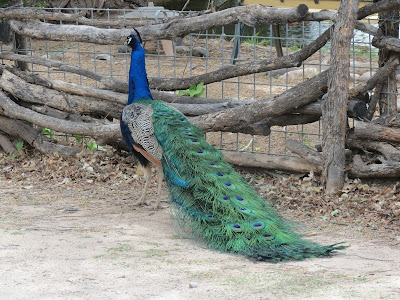 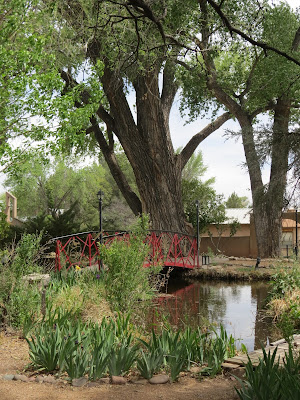 In the meditation garden, the big orange and white carp were far from the bridge. We could see them in the distance, though they didn’t come begging for crumbs, as they had the last time I was there. But what do you make of this little crowned frog? Is that a Christian symbol? Or what? 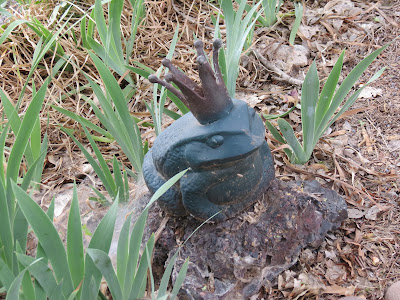 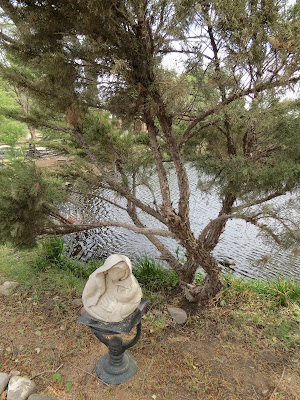 The garden was so much greener that, despite the carp keeping their distance, there was no way for us to be disappointed, and we enjoyed conversation on one of the conveniently placed benches and strolled around the ponds before moving on to explore the shelves of the little “Always Open” used bookshop and finally returning to the office and new bookstore, where my friend purchased pecans and I found more lovely notecards. A volunteer kindly took pictures of us together outdoors before we started back to Benson. 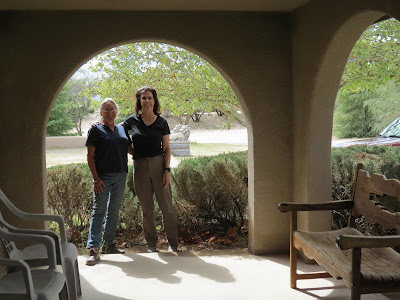 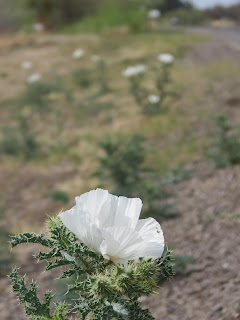 And my friend kindly stopped at the entrance to the monastery grounds so I could photograph beautiful prickly poppies in bloom. We had had a wonderful, memorable day! What more could I ask? And yet there was more to come after my friend and I parted to find our separate ways home, because back in Willcox I found letters from two friends waiting for me in the p.o. box, and when I got to the cabin in the ghost town I learned that the Artist had also had a wonderful day on his own. He had visited a new friend and then come home to walk the dog and paint.

One of the best things about spending time apart is having things to tell each other when we come back together again, and in this instance, we were also able to rejoice in each other’s happily spent hours as well as our own. That was the icing on the cake. 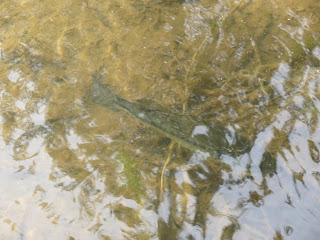 What a wonderful day this was - thank you for sharing it with your readers Pamela. I love the photos too.

Glad you enjoyed the trip, Deborah. And in a timely p.s., last night I read, in a volume of Flannery O'Connor's letters (she raised peacocks) that a peacock's tail feather may be five feet in length!