We Did Not Go to Albuquerque 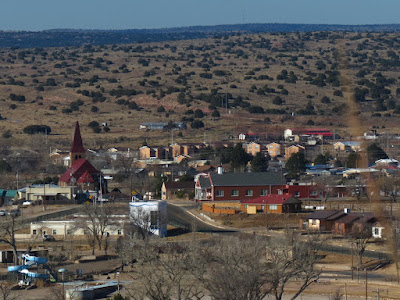 Dear little Santa Rosa! We did not visit the Blue Hole on this trip through (see our visit three years ago here), but we did drive up and down the main street a couple of times (where I see the old diner on the corner near the courthouse will have, in new guise, a grand opening on February 10), and we went out for dinner, which for me was the taco plate with a cold bottle of Corona and lemon slice — because, for me, Tuesday in Santa Rosa will always be Taco Tuesday. In the morning after the beautiful full moon, however, we said good-by to the Santa Rosa cats and were back on the road again. 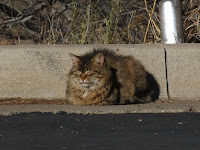 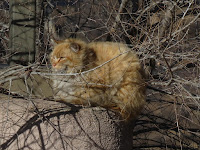 Ah, but — not an expressway or toll road this time! This time we chose the road less traveled and one that we had never traveled before, Hwy. 54 south. It was, in a word, magnificent! Sadly, however, there is no way a small screen image can convey the enormity, the breathtaking immensity of the grassy mesa lands, they way they go on and on in every direction, right up to the empty horizon. Also, the rounded, hump-backed junipers sometimes, at a distance, looked like grazing bison. No, I know you're not seeing what I saw. I wish you were. 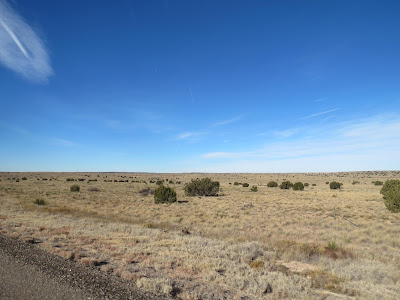 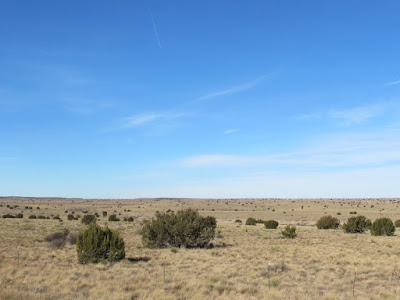 Towns are few and small along Hwy. 54, and most of the business districts (e.g., Vaughn, though a highway crossroads) are nearly ghost towns, but they still have a magic all their own. This one goes by the beautiful name of Corona. 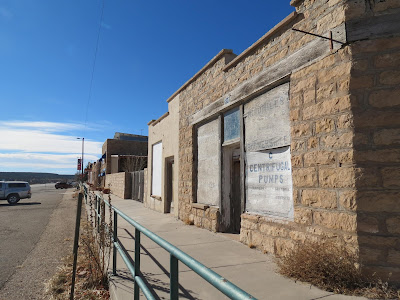 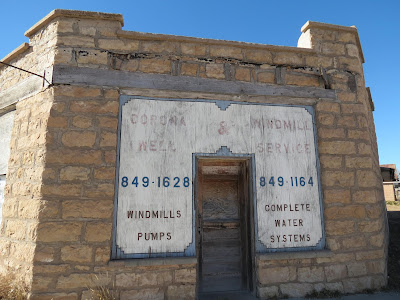 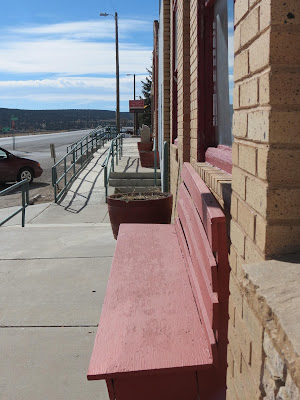 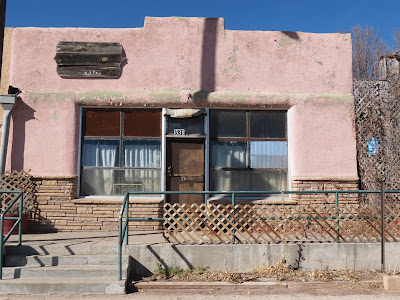 Around the corner and on the back streets we found other colorful and interesting scenes, including tractor heaven. It's clear that Corona is home to a lively population. There is a fair-sized school, too. 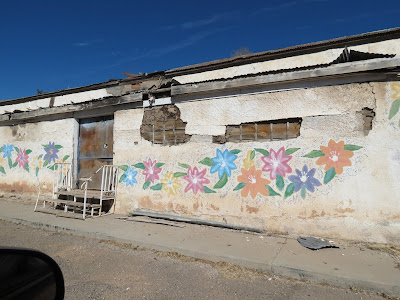 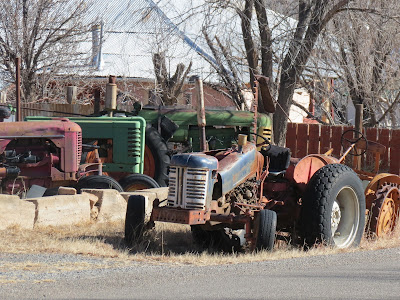 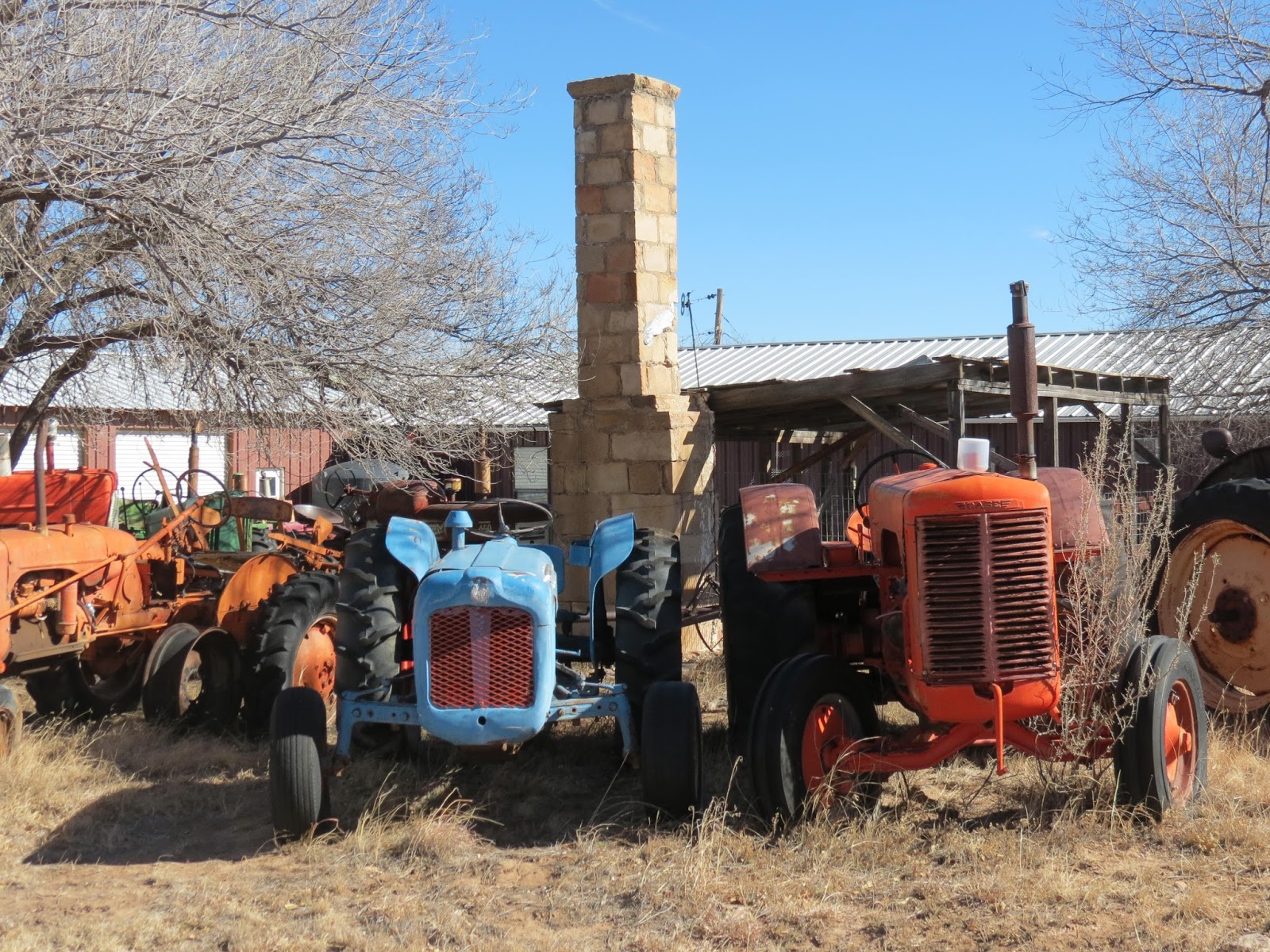 A peek through a wrought-iron gate into a secret courtyard gave a glimpse into surprising hidden garden patriotism. 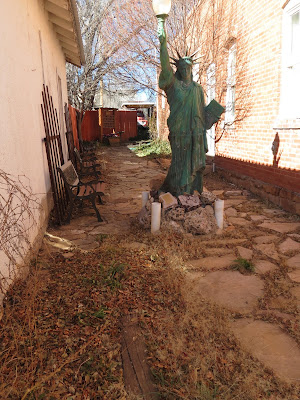 Our most thrilling sighting, however, appeared to us back on the highway. It was a small group of eight or nine pronghorn antelope, and no, I had no time to grab the camera, but seeing them was the major excitement of our day. They were David’s first pronghorn, and I hadn’t seen any since a family vacation back in my birth state of South Dakota when I was sixteen. A little farther down the road, as I was busy looking for my national parks and recreation lands pass, David spotted the first roadrunner of this year’s Southwest winter. Then a sign warned us to be alert for elk, but we had no luck on that front. No elk appeared, though I raked the grassland with my eyes, looking and looking. “The world is one big flea market,” the Artist commented. “If you’re looking for something, you won’t find it.” We had not been forewarned about pronghorn and weren’t looking for them at all. They were pure serendipity. 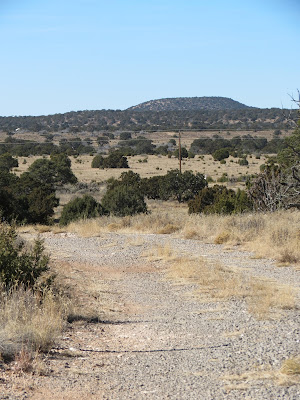 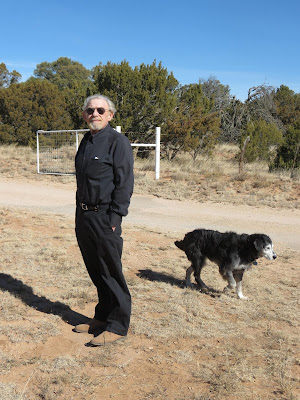 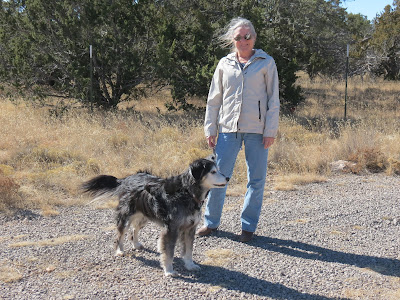 Serendipity is one of my names for Sarah, and finally we found a place where we could drive off the road all stretch our legs. That made Sarah happy. But it was very windy! Can you see the wind?

Carrizozo, the county seat of Lincoln County, New Mexico, was a larger town but no less charming to me, as it had many aspects of a Mexican town. It is a town with an interesting name and history. ¡’Zozo me gusta! 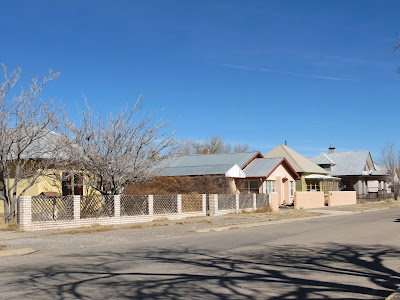 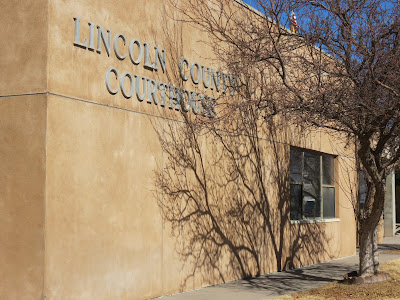 Many handsome and sweet buildings, but the library below was #1 in my book, for the motto over the door: 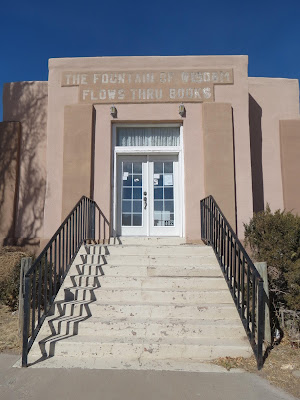 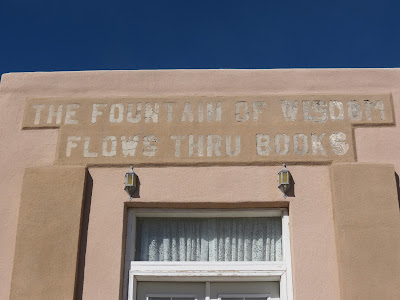 We paused briefly by the side of the road in one more town, Tularosa, so I could photograph this lovely church that reminded me of churches I saw recently in the Yucatan. 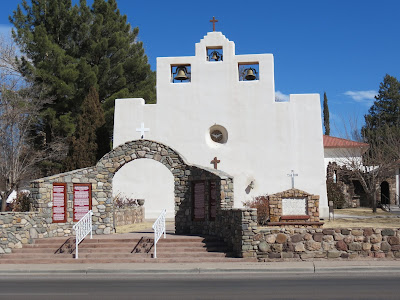 Then down the road a way we parted company with 54 in Alamagordo, as it plunged south toward El Paso while we turned west in hopes of making Dos Cabezas, Arizona, by the end of the day. We didn’t quite do it. Could have, but decided not to push it. Might as well log a full week on the road as six days! The Artist had had a very full day’s driving already, and we had both had kept our eyes and spirits extremely taking in the sights, from White Sands to mountains and through the exciting San Augustin Pass. For more excitement, try this video. 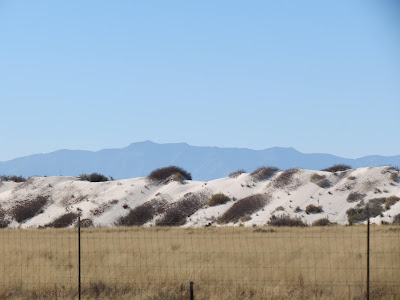 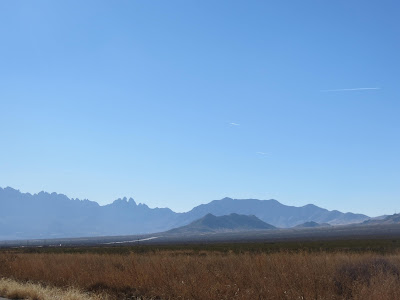 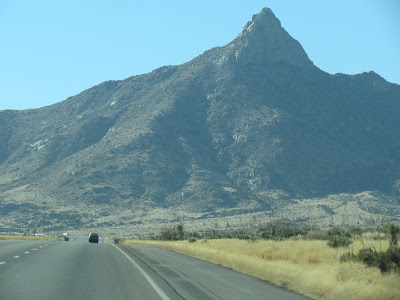 It was wonderful, on this snowy, blowy, icy morning in northern Michigan, to ride along with you and The Artist and Serendipity through the great Southwest. Hope your eyes are filled with beauty and wonder all day today.

Good morning, Gerry! Great to have your company this morning! You see that after my hesitancy about committing to the blog for this trip, I couldn't hold back, after all. Stay warm in Michigan, and I'll keep bringing you sunny images from the Southwest.

It's beginning to snow here too. Again. So I'll appreciate the sunshine you send as much as Gerry. I love the library with it's saying above the door! Traveling the back roads, as far from the freeway as possible, is the best way to see the world. I'm so excited for you!

We saw the weather forecast for Michigan this morning, with VERY COLD temperatures. I send you virtual sunshine from the Southwest, Dawn!

Thanks for the ride-along! Loving the photos and commentary. Greetings from 17 degrees and a howling NW wind at Cathead Point!

Oh, Barbara, it's hard to imagine! It is so sunny and warm here! But I'm glad to have you ride along with us any time.