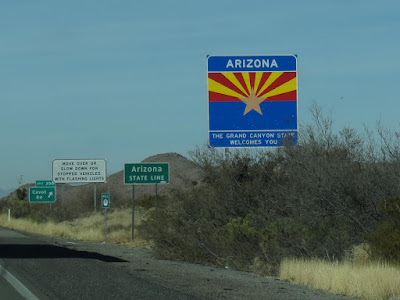 Groundhog Day. We are here at last in the cabin in the ghost town in Cochise County, Arizona. 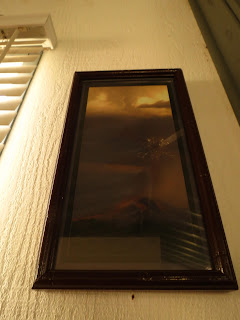 Choosing discretion over valor, we stayed over Wednesday night in Deming, New Mexico, rather than driving on to arrive and unpack in the dark, and it was a good decision. We had the rising sun behind us in the morning and reached Willcox before noon to pick up keys and get out to the cabin, where we spent the afternoon in nonstop motion -- unpacking, cleaning, rearranging, and generally getting settled. I was happy to find a couple traces of our stay here three years ago. No one had discarded my jar of "desert glass," and a thrift shop art find (unlike towels and pillows and can opener) had also survived interim renters. These little items increased my feeling of having arrived home. 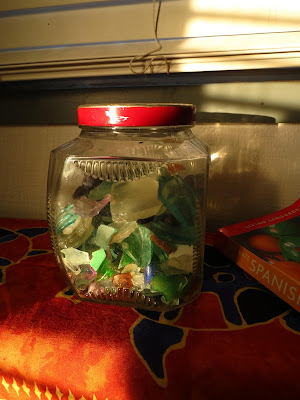 From the looks of the mountains, I'd say it's been a warm winter here. The Pinalenos to the north of Willcox had snow on their peaks when we were here last, snow that lasted well into March. None this year. We'll see how the Chiricahuas look when we are refreshed enough from the cross-country trek to venture out that way. One thing I noted with particular pleasure is that the distinctive twin peaks of our mountains, las Dos Cabezas, are clearly visible from the New Mexico state line. I smiled to spot them and watch them draw nearer as we drove west. 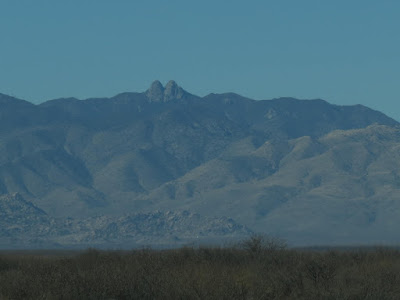 West to Willcox -- where I had forgotten the extent to which mountains surround and dominate the town -- then south and back in an easterly direction as we climb in elevation to the ghost town.

It was 6 a.m. when we first checked the time, 6:30 when I got up -- to challenge myself at making coffee without a coffee maker or even an appropriate pot but, more importantly, to watch the progress of the dawn. At first the sky was only somewhat light in the east (giving me plenty of time to wrestle with coffee makings), but gradually, as it always does, that light grew brighter until I saw that the sun would clear the horizon before 7:30. Watching the sky, watching the clock.... I don't know the official sunrise time today in Willcox, but here in Dos Cabezas it's coming up over the mountains to the east by 7:25. To Midwestern eyes, especially eyes coming from a northern Michigan winter, the reliability of the Arizona sun and its dazzling is astonishing.

It's cool in the cabin, but the afternoon and evening of our arrival were so warm that I voted not to turn on the propane heater, and we were warm and comfortable under the covers all night. Sarah took a while to get settled on her bed under the Artist's desk, and by morning she had figured out a cozier arrangement. 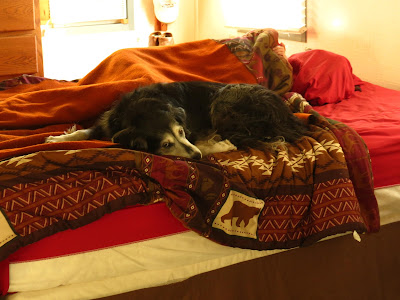 We are all doing fine; however, we really do need to buy a coffee pot and can opener.

My reading, I'm sorry to say, has completely fallen off during the past week. A few nights I managed to read a page or two of House Made of Dawn, by M. Scott Momaday, but then sleep would overtake me. The week before, my morning and evening studies of Spanish had made inroads into any other reading: this past week, even Spanish has been neglected. But now we are here, and soon we will establish routines for our desert winter, including time for reading and study. 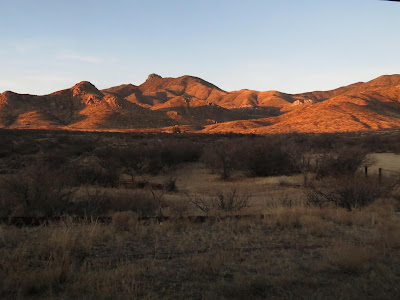 I just loved this post and I'm so glad you're making the trip.

Camp coffee! I could almost smell it as you fixed it Pamela. So glad that Sarah found a nice warm place to rest her car-weary self!

Pamela, I so enjoy your photographs and descriptions of places! I'm curious about your desert glass.
Cara Lee

Hi, you all! Deborah, we got a regular coffee maker yesterday. No more cowboy coffee! Cara Lee, I posted three years ago about what I call "desert glass." I like picking up the different colored fragments, though they are not wave-washed smooth like beach glass.