A Look Around a Bookstore at Year’s End

Today will be my last day of 2017 in my bookshop. Dog Ears Books will be closed for the winter, as it was three years ago, re-opening sometime in May of the year almost upon us. For three months this winter, the Artist and I will be living in the ghost town cabin we occupied three years ago in southeast Arizona. 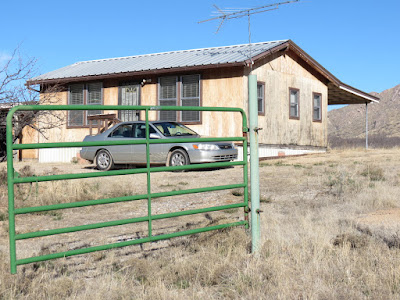 Three years ago I was very insistent that we were not taking a vacation but a sabbatical. This time around, for me, I don’t know what it will be.

I’m reading a recently published novel, originally written in German, translated into English. Go, Went, Gone, by Jenny Erpenbeck, is set in what was for much of my lifetime — and the lifetime of the central character, a just-retired professor of philology — East Berlin. Germany has been unified since the Berlin Wall came down, but as this central character makes his way through the streets, through his life, he encounters change everywhere.

Now that the Wall is down, he no longer knows his way around. Now that the Wall is gone, the city is twice as big and has changed so much that he often doesn’t recognize the intersections. Once he’d known all the city’s bombed-out gaps, first with rubble, then without. Later still there might be a sausage stand or Christmas trees for sale, or often nothing at all. But recently all these gaps have been filled with buildings….

He is at loose ends in other ways. His wife having died, he lives alone now, and retirement from university teaching has removed the old, basic structural framework from his life.

He can’t even comprehend that his departure is just a part of everyday life for all the others—only for him is it an ending.

What is he to do with himself now? It is his own problem to solve, no one else’s.

Into this empty, unstructured, solitary life comes a new situation. He becomes aware of a group of refugees in Berlin from Nigeria, Ghana, Niger, Sierra Leone, and Burkina Faso, and since his entire scholarly life was organized around projects, he now conceives a research project involving the refugees. He knows next to nothing about the African continent and so begins the new project by reading about the refugees’ countries of origin and about refugees in general. He draws up a list of questions to ask them in conversations he imagines having. Here it seems, at the outset, he is on familiar ground.

Often when he was starting a new project, he didn’t know what was driving him, as if his thoughts had developed an independent life and a will of their own, as if they were merely waiting for him to finally think them, as if an investigation he was about to begin already existed before he had started working on it, and the path leading through everything he knew and saw, everything he encountered and experienced, already lay there waiting for him to venture down it. And probably that’s just how it was, given that you could only ever find what was already there. Because everything is always already there.

The words “always already” stand out for me, an echo of my graduate school classes — “toujours deja,” the delicious phrase of the French deconstructionists. (And I'm sorry I don't have accent programs on my current word processing program.) Maybe I will think more about that later. For now, staying with the novel, by page 48 (where I find myself in the dark of this December morning, one day from the end of the year) it is clear that the professor’s questions were already his own before he encountered the refugees.

“What do you do all day long?” he asks. The refugees want to work but have no papers that allow them to be employed in Germany, while the professor’s working life, his professional life, has reached its end. “One day is just the same as another,” one of the refugees tells him. We have already seen, before this encounter, how the professor shops and prepares his little meals, every day the same salad and sandwiches, the same slices of cheese and head of lettuce. The problems of the refugees are certainly more acute than those of the professor. His, after all, essentially come down to what everyone faces in old age, while their cultural and geographic dislocation was sudden and desperate, a flight which many failed to survive at all. Still, there are parallels. All face the question:

When an entire world you don’t know crashes down on you, how do you start sorting it all out?

The retired professor, his days no longer ordered by a schedule, has finally begun to sort through the boxes of books from his former university office and to find room for them on the shelves of his home. He has no children. He imagines a dealer in used books carting away his library after he dies, with all the objects that belonged together in his life being dispersed to new homes and to landfills. Nothing, it seems, will hold them together any longer. While he is still alive, what is to hold his life together?

“What will you do in Arizona?” people ask me. The Artist did very little painting there three years ago but says he intends to work this winter, now that he has the beginnings of familiarity with a landscape so vastly different from that of Michigan. As for myself, three years ago I had a sabbatical project. While still in Michigan, I had begun writing a novel and was eager to concentrate on it for an entire winter. 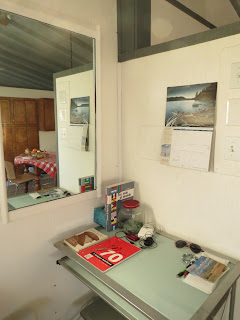 This year I lack that sharp, clear focus. Will I work again on the novel? Some other writing project? Get back to drawing? Write regular blog posts on our travels and explorations for friends back in Michigan and elsewhere? Right now I feel at loose ends but look forward, anyway, to being without a schedule. Unstructured time is my friend, not my enemy. It is something I crave as much as I crave adventure, which that first winter in Arizona also gave me.

In part I crave unstructured time because my usual world, my structured world, is altering, is altered, has been altered, in so many ways. Alterity, my old friend Annie’s thesis topic, sometimes feels to me the only continuous thread in life — a paradox, that, in more ways than one. How much weight, I wonder, can be assigned to various possible factors that come together as constraints on one’s life? How much, for example, does a hostile political climate shape day-to-day affect, as opposed to (or does it reinforce?) response to the inevitable losses that come with age?

Ah, but why go down a sad road this morning? Better to look back on the sunny hours…. 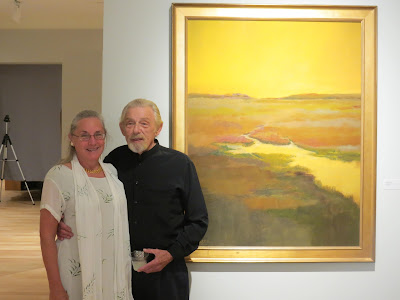 The best part of the year coming to a close, for me, was the success of the Artist, my darling, the love of my life. The Artist had a museum show in 2017, every artist’s dream, and he was this very month interviewed and photographed for a major magazine feature to come out in spring of 2018. Perhaps my role for the rest of my life will be what I have called myself in jest for so many years: “handmaiden to the arts.”

In my own chosen line of work, among the many alterations in my world for some time now have been those in the ever-changing bookselling world. Never the same for two years in a row since I got into it in 1993, the world of print books — their publishing, their selling — has been rocked and disrupted and transformed again and again in the course of the last quarter-century. “You can’t compete with Borders, can you?” someone remarked to me in a mournful voice sometime during those twenty-five years, but Borders came and Borders went, and Dog Ears Books has not died yet, despite massive world-wide efforts by the online behemoth to crush the rest of us. So far we have survived. So far the entire world has not come crashing down at once, and what has crashed or crumbled in one corner has been quickly shored up in another, though what the coming year will bring is anyone’s guess.

In September I reached the ten-year mark for this blog, Books in Northport. Time always passes quickly in retrospect. Now today is my last bookstore business day for 2017 is upon me. My intention is to re-open by mid-May and then to celebrate the 25-year anniversary of Dog Ears Books over the course of the summer — another milestone, achieved over much more difficult obstacles than those faced by a blog. If I am able fulfill my intention for a quarter-century anniversary celebration, details will follow as the coming year unfolds.

This morning my only hope is that as many people as can will come to visit on Waukazoo Street to take advantage of our year-end sale. Parting is such sweet sorrow! 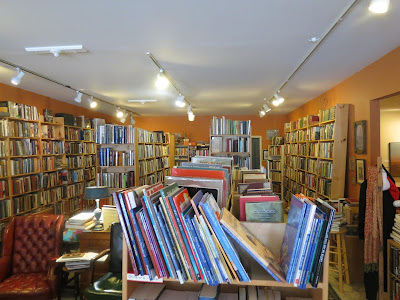 Perhaps part of my ghost town winter will be sorting through the various pieces of my ever-changing world to see how they might fit together into some new and satisfying whole.

And so today I say —

Happy sorting to you, my friends! May your hopes live on another year, your dreams expand buoyantly, and may you find life absorbing and satisfying in the coming year! May it bring you happiness and peace of mind! If not peaceful contentment, then energy and resolve and passion. Or — maybe all those aspects of being alive, each in turn, one day at a time?

I have to borrow that last paragraph but will cite your words of course! I'm anxious to hear what your three months in Arizona will bring to you.

You almost make me want to dig the car out again and make it to town....just to say HAVE FUN out there in the Southwest! I hear the bit of melancholy in your voice and I know that nothing is for sure, but I certainly hope to see you next summer during your celebration of 25 years in the bookselling business!

Your quote from the book about his library being taken apart after he dies reminds me of Aunt Vi once she was in the nursing home and all her worldly possession had been distributed among family and friends and landfills. She voiced much the same sadness as your professor.

Anyway...hug Sarah for me, and enjoy your break in warmer climes. The lake and your community will be here when you get back.

Susan, Deborah, and Dawn, thanks for reading and commenting. Everyone HAPPY NEW YEAR!

Oh, Pamela, I so admire you. You shine with light and curiosity and wisdom and hope and love. While you are away, the heart of Northport is away. I'm going to spend some time now looking through recipes for the ideal 25th anniversary cake. Please keep writing.

Merry Adventures, Pamela and David. May you meet many horses!

From purveyor of books to cowgirl, snow and ice to sunny desert,
Midwest flora and fauna to endless sparse vistas: makes sense to me!
(and hopefully Sarah approves)

Trudy, you are WAY too complimentary -- but I love the cake idea! You are generous in every way! Cara Lee, thanks for the good wishes. BB, Sarah has a hard time reading our minds, but when she can take care of her outdoor doggie business without having to wade through snow and wind, I'm sure she will be grateful to us for the change in scenery.

I Have to echo CLP - I hope you meet many horses on this adventure!

More horses and more often is a big part of my plan!