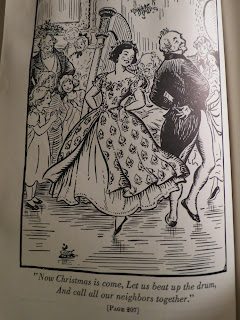 Did my mother’s high school class not have a yearbook, or could family simply not afford to buy a yearbook for her? These are questions I need to ask soon (my mother is 95), and they arise from the endpapers of what appears to be a surviving textbook from her senior year. “This book belongs to Joan Bryant,” is written at the top of the front-facing endpaper, with Joan’s address underneath, but then beneath the address is the inscription “To Nora from Joan. 12-24-’39.” 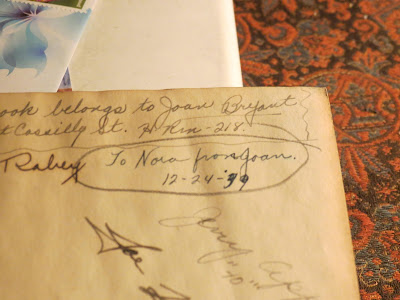 Christmas Eve, that was. A Christmas present? All over the endpapers then are signatures of 11 other classmates from the class of 1940. Perhaps Essays Then and Now was never a school textbook? Or was it a text from the first semester of that senior year, one Joan’s parents purchased for her and that she passed along to Nora, my mother? 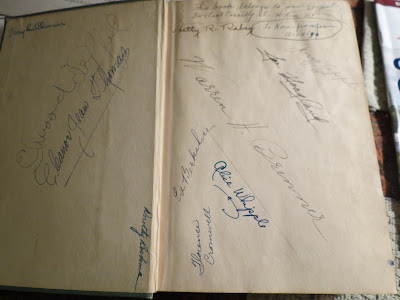 I took the book down from its place on the shelf one morning this December and turned to an essay by Washington Irving (1783-1859) called “Christmas Eve.” It seemed fitting both to the season and to the book’s inscription, and perhaps it would help me get into the spirit of the season.

It was a brilliant moonlight night, but extremely cold; our chaise whirled rapidly over the frozen ground; the postboy smacked his whip incessantly, and a part of the time his horses were on a gallop.

Irving was going to spend the holiday with an English friend whose father ran his inherited country estate according to the mores of two centuries earlier.

“My father … used to direct and superintend our games with the strictness that some parents do the studies of their children. He was very particular that we should play the old English games according to their original form; and consulted old books for precedent and authority for every ‘merrie disport’; yet I assure you there never was pedantry so delightful.”

The two young men descend from their conveyance and proceed on foot through the park to the hall,

…through a noble avenue of trees, among the naked branches of which the moon glittered as she rolled through the deep vault of a cloudless sky….

to arrive at the “old family mansion,” where they find the friend’s relatives of every age assembled and an enormous “Yule clog” ablaze in the fireplace. A festive dinner is followed by music and dancing until the company retires for the evening, while the separate party in the servants’ hall continues later into the night.

What did my mother make of this story when she was a girl of seventeen? There’s another question to put to her at the next opportunity. The daughter of an Irish immigrant father she never knew, she and her mother and stepfather and half-brother and -sister scraped through the Depression years. No landed country estate with servants for her family, and yet I remember my hardworking grandparents as affectionate and cheerful. The rundown dirt road neighborhood where they lived and where I visited as a child, a neighborhood of too many children and not enough money, where no one had indoor plumbing and few of the children had shoes, felt like the heaven of freedom to me. 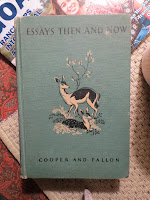 It’s lovely to me that horses provided motive power in Washington Irving’s day. I’d have liked that. But in my grandparents’ neighborhood too the occasional horse or pony or mule could be found, and there were plenty of trees to climb and chickens to feed and eggs to gather and berries to pick. Barefoot from morning to night, I played with neighbor children, helped with chores, and delighted in being close to my grandmother, “Gram” to me, “Mums” to my mother.

No, if offered the choice, to travel back in time either with Washington Irving or to visit my grandmother again, I would not hesitate. No English manor house for me. I’d rather be the barefoot girl again.

Postscript, same day: I just had word that my Aunt Diane, widow of my mother's brother, died yesterday, leaving my mother now the oldest family member of her generation on both sides, siblings and in-laws. I'll need to call her with my questions tonight and also to share memories of my dear aunt and uncle.

Post-Postscript Dec. 12: Well, here is the scoop. My mother says she has a high school yearbook (Why don’t I remember ever seeing it? Have I seen it and forgotten?) She didn’t remember the book but said, when I described it, that it sounded like a textbook. She recognized many of the names as being those of students with whom she graduated (hers was a class of 416) but said that Joan graduated mid-year. “So maybe that’s why she gave me the book – because she was done with it and I would be needing it.” And now you can bet that when I’m at my mother’s house toward the end of January, I’ll be wanting to see her high school yearbook!
Posted by P. J. Grath at 9:06 AM

Did you call Mom last night? And if so, did you talk to her and have a chance to ask questions? The time is indeed passing where we can have our answers from previous generations asked and answered. So lucky Mom is in good mental and physical health.

Deborah, I thought I would wait until today to make sure she had gotten the news from our sister about our aunt's death. Yes, we are truly fortunate that she is in such good health!